The rising demand for robotic blasting procedures in automotive, marine, and construction sectors has invariably propelled the sandblasting machines market share augmentation over the recent years. With the growing need to significantly reduce waste generation and operational costs, the conventional blasting systems are being replaced with technologically progressive blasting solutions across various business verticals. 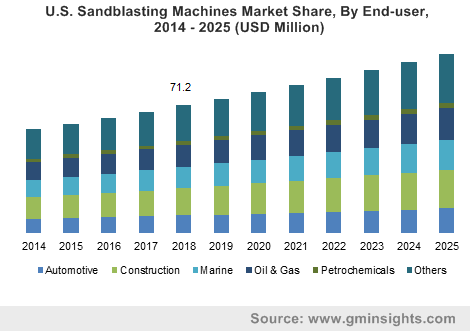 It has been observed that the local manufacturing firms operating in aftermarkets have been demanding high-grade sandblasting machines to refurbish tanks, railway carriage, trolleys, and vintage cars. As a consequence of the aforementioned factors, the overall remuneration graph of sandblasting machines industry has demonstrated an exceptional uptick in the recent past.

The competitive landscape of sandblasting machines market has been swamped by leading giants in HVAC and construction industry which includes Gläsner Sandstrahl Maschinenbau, Kramer Industries, Graco Inc., Burwell Technologies, Empire Abrasive Equipment Company, Clemco Industries, ABShot Tecnics, MHG Strahlanlagen, and Airblast B.V to name a few. In order to better serve a wide base of customers from numerous business verticals, the aforementioned firms have been adopting the route of strategic acquisitions in the recent past.

Citing an instance of the same, one of the prominent manufacturers of fluid handling equipment Graco Inc. has recently announced to have concluded the takeover of scarifying equipment producer Smith Manufacturing in the month of December last year. Elaborating further, the latest acquisition will assist Minneapolis-based Graco to complement its existing pavement maintenance and line striping equipment portfolio with Smith Manufacturing’s vast range of products.

Get a Sample Copy of this Report @ https://www.gminsights.com/request-sample/detail/129

Despite a robust growth graph, the global sandblasting machines market outlook is fraught with numerous challenges that might hamper rapid product penetration across various business areas in the upcoming years. One of the most pivotal factors that is slated to impede sandblasting machines market business space is the rising environmental concern pertaining to wastewater discharges from dust control sprays and noise pollution.

Various developed and emerging nations have increasingly prohibited the utilization of cleaning abrasives that consist of silica in excess of 0.1%. For the record, it has been observed that inhaling dust particles from abrasive materials such as silica sand could result in severe breathing complications as it escalates the risk of contracting various lung disorders.

In this regard, it would be imperative to mention that several regulatory authorities along the likes of Food and Drug Administration (FDA) and Environment Protection Agency (EPA) have prescribed various eco-friendly alternatives like dry ice blasting that would further restrict the revenue share of sandblasting machines industry in the longer run. However, the proactive implementation of numerous control measures such as constructing exclusion zones around sandblasting activities, substitution of hazardous components with environment-friendly ones, and engineering controls would undoubtedly assist sandblasting machines market space to proliferate at a substantial pace.

In terms of regional growth outlook, the Asia Pacific region has emerged as the foremost terrain garnering a commendable share of the total remuneration portfolio of the global sandblasting machines market in 2018. The rapid product penetration in this region can suitably be attributed to soaring construction, manufacturing, and industrial activities. Concurrently, the major emerging economies across Asia Pacific such as India and China have been at the forefront to generate the largest demand for sandblasting machines.

The European continent is also anticipated to accumulate a substantial proportion of the global sandblasting machines market share in the ensuing years. The commendable hold that Europe is expected to have on the industry can be credited to the robust expansion of the regional automotive, O&G, and construction sectors. Indeed, numerous EU member countries are found pouring in capital in lucrative oil and gas projects, which will majorly propel Europe sandblasting machines market size.