The global automotive sunroof market has gained significant momentum lately, a feat that can be attributed to the rising demand for passenger vehicles. Undeniably, this has been the result of an increase in consumer purchasing power, improved economic conditions and lower bank interest rates. Luxury cars is one of the many segments of the automotive domain that has experienced considerable demand over the last few years. A massive push from factors like growing prosperity along with shifting consumer habits will enable the luxury carmakers to tap more opportunities through a wider range of geographies, consequently impelling automotive sunroof industry size. 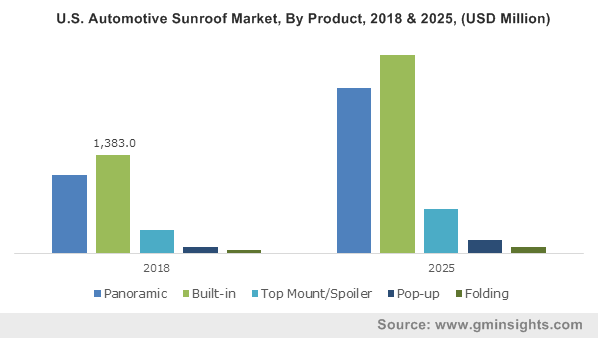 Recently, the German luxury brand Mercedes kicked off 2019 with a sale of 22,507 vehicles. Sunroofs in cars act as a top-notch luxury feature, with most luxury cars having one with higher-end variants as well as lower end. The growing demand for luxury cars will thus drive the global automotive sunroof market demand over the forthcoming years.

Electric cars are estimated to be the next disruptive market force as far as the impact of technology in transportation is considered. Electric cars are a one-stop solution to the environmental impact of conventional cars. One of the main reasons for the introduction of electric cars is the concern over greenhouse gas emissions and their role in global warming. Given its environmental benefits, its sales are further spurred by the imposition of stricter government regulations concerning CO2 emissions and fuel use.

Get a Sample Copy of this Report @ https://www.gminsights.com/request-sample/detail/152

As per Global Market Insights, panoramic sunroofs are anticipated to gain substantial traction between 2019 to 2025. Panoramic systems normally comprise a multi-panel roofing design that facilitates opening above the front and back seats instead of offering a single option in the center of the vehicle. Moreover, panoramic sunroofs are considered to improve the aesthetics of a car compared to traditional sunroof models.

To offer innovative in-car technologies, auto manufacturers are looking at newer and better sunroofs in their vehicles. The perfect example to validate the point is the BMW X7, the all-new SUV by the Munich-based luxury carmaker. The model includes a three-part panoramic sunroof to let in light, with a touch of theater to display over 15,000 graphic patterns on its glass through LED lights. Such innovations are a significant addition to a car both aesthetically and for ventilation, which would attract more demand from luxury car enthusiasts. The expansive demand for innovative designs and enhanced aesthetics will thus help fuel panoramic automotive sunroof industry share in the years to come.

Considering the geographical penetration, it would be vital to mention that the Europe automotive sunroof market will depict substantial growth over 2019-2025, powered by the presence of several automotive majors across its nations. Eminent automotive manufacturers operating in the region include BMW, Volkswagen Group, Fiat Automobiles S.p.A and Daimler AG among others. These companies are constantly introducing advanced products and expanding their production capabilities to meet the growing demand.

Additionally, the region is also one of the significant markets for electric vehicles. For instance, data by the Norwegian Road Federation unveiled that electric cars accounted for nearly 60% of all new cars sold in Norway in March since the country is vying to end fossil fueled vehicles sales by the end of 2025. Collective efforts by private and public sector bodies of the region to reduce the environmental impact of conventional vehicles will accelerate the adoption of electric vehicles, eventually pushing Europe automotive sunroof industry trends over 2019-2025.

The global automotive sunroof market is susceptible to encounter multiple opportunities in the following years, on account of technological advancements in sunroofs, the launch of new automotive models, and increasing investments into R&D for developing advanced technologies. According to a research report by Global Market Insights the global automotive sunroof market valuation is estimated to surpass $40 billion by 2025.