The vivid growth of industrial hydrogen applications across sectors such as chemical processing, fuel cells, refinery, and petroleum is soon going to result in hydrogen generator turning into a billion-dollar market. According to Global Market Insights, Inc., “The Hydrogen Generator market worth USD 800 million in 2015, is estimated to surpass a revenue of USD 1.32 billion by 2024.” Hydrogen generators are primarily the units installed to produce hydrogen. Depending on the requirements of the industrial process, the hydrogen generator deployment is mainly done either as an onsite generator or a portable generator.

The government initiatives towards a sustainable environment by reducing fuel emissions and dependency on non-renewable energy resources also play a vital role in increasing the hydrogen generator market size. The rising trend of green fuel use across the industrial, commercial, and residential sectors will also heavily boost the industry share. Hydrogen generator offers high operational reliability and is considered to be a convenient and secure hydrogen storage and delivery source free from the hassles of cylinder handling. 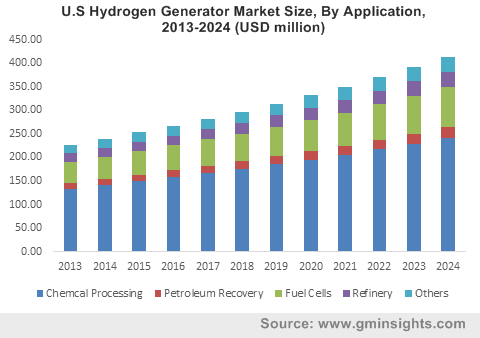 The expanding automotive industry will bring enormous growth prospects for the overall market. Increasing adoption of electric vehicles is encouraging the growth of hydrogen fuel stations in turn stimulating the market growth. The government is also encouraging the use of electric vehicles over the conventional means of transport owing to the eco-friendliness, reduced fossil fuel dependency, and operational cost-effectiveness of the former. Key automobile manufacturers such as Ford Motors, Nissan, GM, Mercedes-Benz, Honda, Toyota, and Tesla Motors are also significantly sharing the electric vehicle business space. It is estimated that the global electric vehicle sale will surpass 7 million units by 2024. This will in turn result in a comprehensive increase in the fuel cell demand. Hydrogen generator application in the fuel cell market is anticipated to grow at a CAGR of 6% over the period of 2016-2024.

Get a Sample Copy of this Report: @https://www.gminsights.com/request-sample/detail/677

The refinery industry is another major growth prospect for the hydrogen generator market. It is estimated that the hydrogen consumption in refineries accounts for 12 billion standard cubic feet per day. The demand for hydrogen in the processing of crude oil into refined fuel such as gasoline and diesel and removing the impurities from these fuels are expected to catalyze the application growth. Hydrogen generator application in refineries is forecast to surpass USD 120 million by 2024. The food and beverage industry is also supporting the hydrogen demand owing to its application in removing contaminants such as bacteria and viruses from the food items.

The refinery, oil & gas, and chemical processing industries usually adopt the onsite installation method, which is predicted to dominate the industry with a CAGR of 5% over the timeframe of 2016-2024. Portable hydrogen generators are popular amongst the transportation and construction industries and are estimated to record an annual growth rate of 5.8% over the coming eight years.

“Global hydrogen generator market is anticipated to grow at a CAGR of 5% over the period of 2016-2024.” North America market accounted for USD 300 million in 2015, and is estimated to witness substantial gains over the coming period. The growth can be attributed to the rising demand across power generating plants & refueling stations and growing trend of green fuel across this region. The U.S. and Canada will be the major revenue pockets for the North America hydrogen generator market.

Asia Pacific, primarily led by South Korea and Japan, will also grow significantly over the coming years owing to rising demand across the refinery sector, growth in the petroleum industry, and stringent government regulations across this region. The Asia Pacific market is estimated to register a CAGR of 6% over the period of 2016-2024.