The volatility of oil prices is a crucial factor that has tremendously impacted oil storage market in recent years. Indeed, oil prices have been a debatable topic over the last half a decade. The crude prices underwent a major decline from trading at USD 109.45/barrel in 2012 to USD 52.51/barrel in 2017, resulting in a supply-demand imbalance. The supply of crude oil has surpassed its demand leading to an overabundance of the crude oil worldwide. This has resulted in a surging demand for oil storage facilities across the globe, rapidly propelling oil storage market trends.

The declining crude oil prices have also built a tough competitive scenario in the O&G market. In accordance, oil companies have been focusing toward expanding their operations to increase their supply and storage infrastructure – a move that will commendably impact global oil storage market growth. Having once been the monopoly of the Gulf countries, oil storage industry as on today has established its footprint across myriad geographies. The emerging economies, mainly the Asia Pacific in fact, have been particularly proactive across this business space. Heavy import of crude oil across this region has resulted in an upsurge in the demand for storage facilities. As per the National Bureau of Statistics, Asia held 191 barrels of crude in its petroleum reserve in the year 2015. 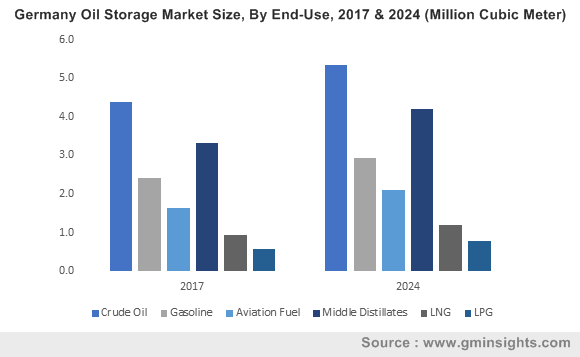 Regional governments across the APAC have also been taking initiatives to augment oil storage market outlook across the continent, taking into consideration the national economic security as these oil reserves can be used at the time of energy crisis, safeguarding the national economy. For instance, the Petroleum Ministry of India announced its decision to increase its oil storage capacity taking the advantage of the reduced crude oil prices. The Government of India has set up three strategic crude oil reserves, each of 5 MMT capacity in Mangalore, Vishakhapatnam, and Padur. Rajasthan and Odisha are also under the pipeline for this set-up. Initiatives such as the aforementioned are certain to stimulate India oil storage market share in the ensuing years, inherently leading to the growth of this vertical across the Asia Pacific.

Get a Sample Copy of this Report: @ https://www.gminsights.com/request-sample/detail/803

It is noteworthy to mention that China has been a notable contributor toward APAC oil storage market. The country has been particularly keyed up with regards to crude storage and has been adopting various means to strengthen its stance in the geographical landscape of oil storage industry. In 2016 for instance, the Chinese government announced that it would be constructing additional 441 million barrels of strategic petroleum reserves by 2020. A year later, the China Energy Investment Corporation announced that it plans to invest more than USD 83 billion in the development of shale gas across West Virginia. This testifies that the increasing focus toward the expansion of refineries and the ongoing investments toward unconventional resources are certain to impel China oil storage market size.

The competitive landscape of oil storage market is inclusive of some heavy hitters such as CST Industries, Inc., Poly Processing, Snyder Industries, Red Ewald, Inc., Synalloy (Palmer), Assmann Polyethylene Tank, ZCL Composites Inc., Zepnotek Storage Tank, Belco Manufacturing Co Inc, L.F. Manufacturing, Inc., Containment Solutions, Inc, Polymaster, Holvrieka, Tuffa Tanks, and Vopak. The coming years will witness the key players adopting strategic alliances and mergers & acquisitions as a major part of their growth strategy. Additionally, core oil companies are expected to involve themselves in the massive expansion of their supply and storage infrastructure in order to outbid their rivals. A recent such move was Suncor Energy Inc. selling its oil storage stake to Fort McKay First Nation to strengthen its bond with aboriginal groups located close to the oil sands. Powered by the rising number of capital investments toward the development of storage units from domestic and foreign companies, in tandem with the growing demand for the refurbishment of existing storage units, oil storage industry size is anticipated to cross 1.2 billion cubic meters by 2024.