Developing economies to make substantial contribution towards the market growth

Rise in offshore oil & gas exploration activities across the globe is expected to fuel the demand for the FPSO (Floating Production, Storage, and Offloading) market over the coming years. Currently, the exploration activities are being carried out mainly in offshore oil & gas fields of Brazil, North Sea, and West Africa. Growing oil & gas requirements across the globe will boost investments in new oil & gas fields.

The rapid expansion of upstream oil & gas industry coupled with favorable government policies to promote offshore oil & gas exploration activities is projected to boost the market size over the next few years. As per Global Market Insights Inc. report, the FPSO Market share worth USD 21 billion in 2015, is predicted to surpass USD 117 billion by 2024, growing at a CAGR of 19% over the period of 2016-2024.

The U.S. FPSO market share worth USD 20 billion in 2015, is expected to witness a noticeable surge over the forecast timeframe owing to the growing production and exploration of natural gas, rise in offshore activities and the discovery of untapped reservoirs. The Norway market is anticipated to touch USD 3.1 billion mark by 2024. 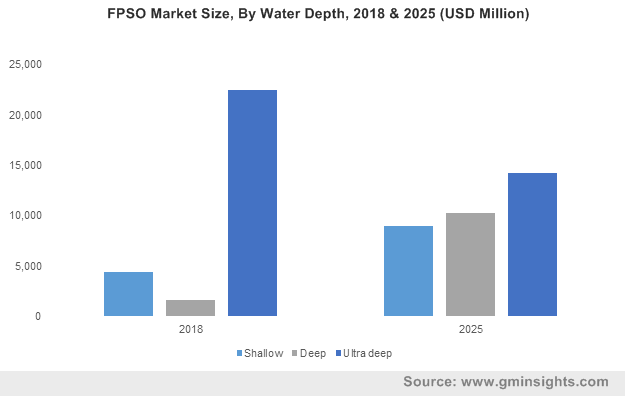 The China FPSO market size worth USD 687 million in 2015, is predicted to witness a significant growth, recording a CAGR of 22% over the period of 2016-2024. The growth can be attributed to the rise in offshore as well as onshore exploration coupled with production activities in the region.

The Angola FPSO market share, growing at a CAGR of 26.4% over the period of 2016-2024, is estimated to reach over 11 units in 2024 in terms of volume. Factors such as growing offshore production and exploration activities carried out in Deepwater reservoirs are expected to contribute towards the regional growth. Firms like Eni, Exxon Mobil, and Chevron have offshore projects in Angola and adds about 1MMbbl/d to the capacity.

Get a Sample Copy of this Report:@ https://www.gminsights.com/request-sample/detail/785

In April 2016, about 260 floating production units were set up in offshore oil & gas fields of which FPSO accounted for approximately 64%. Conversion of tank vessels into FPSO units is predicted to support the industry growth over the next few years. For instance, 1995 built shuttle tanker converted to a Libra FPSO unit in 2015 was designed to achieve the production of crude oil. The converted FPSO market is predicted to record a CAGR of 18.9% over the period of 2016-2024 owing to low capital investments coupled with the ability to operate in small and medium fields.

The redeployed FPSO market worth USD 719.8 million in 2015, is anticipated to witness a substantial growth, growing at a CAGR of 22.3% over the forecast period. The growth can be credited   to the product’s ability to minimize the project execution time. The new built FPSO market is predicted to witness a noticeable growth over the forecast timeframe due to growing ultra-deep water offshore exploration & production activities.