A succinct outline of solar street lighting market in terms of governmental initiatives, India to witness phenomenal proceeds in the regional landscape

With solar power tending to hog most of limelight in the renewable energy mix, solar street lighting market finds itself amongst one of the most burgeoning industry spaces of recent times. Sharply declining component cost, growing manufacturing facilities, and the improving economic scenario outlines the business space’s key to opportunities and profitability. Statistics claim, in 2017 solar PV module prices experienced a decline of almost 80% from what it was recorded in the year 2010. Of course, the marketplace has observed a tremendous push from the rigorous initiatives undertaken by governmental organizations as well as private entities in sync with the global commitment toward climate change.

A couple of years back in 2016, Paris Climate Accord was signed under UNFCCC (United Nations Framework Convention on Climate Change) in a bid to address the increasing global temperatures. For the record, 195 countries as of now have voluntarily joined the sustainability agreement and promised to curtail GHG emissions. Not to mention, this kind of intercontinental clear energy projects is bound to generate a massive demand for advanced solar powered low energy consumed street lighting system, leaving a direct impact on the solar street lighting industry share. 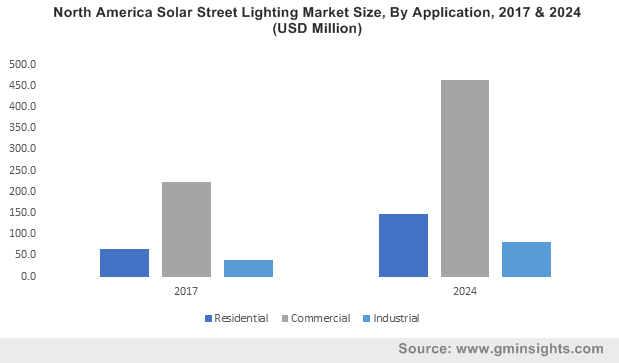 In fact, the transformative trend has already made its presence felt in the business sphere, quite vividly conspicuous from the increasing number of initiatives undertaken worldwide with regards to its extensive deployment. For example, Central African country Gabon, has scarcely announced its plan of deploying nearly 5000 solar street lights across some of the rural as well as urban areas of the region. The project that made to the headlines this May recorded an initial installation in March (first phase) of nearly 50 solar power street lights across Libreville, Bitam, Avorbam, and Makokou, is reportedly shaping up rapidly. The initiative mainly comes on the heels of the country’s initiative to provide sustainable public lighting to rural belts, in the face of severe power shortcomings. In fact, if reports are to be relied on, the northern belt of Libreville claims to get benefitted from the project with almost 30 units of solar power. Envisaged by the regional government to produce electricity via renewable means, the project undoubtedly underlines the expansion of solar street lighting industry in recent years.

Get a Sample Copy of this Report: @  https://www.gminsights.com/request-sample/detail/770

Asia Pacific belt, of late, has emerged out to be one of the opportunistic hubs for the industry stakeholders. The region has exhibited tremendous proliferation in the renewable space, with solar energy at the pinnacle, which has also made it a potential contender in street lighting market. India, surprisingly is likely to standout in APAC solar street lighting industry, with an appreciable CAGR of 8% over 2018-2024. The growth can be primarily attributed to the regional governmental backing and investment in conventional street lighting refurbishment projects.

Judging the aforementioned axioms, it wouldn’t be incorrect to state that solar street lighting industry is likely to witness remarkable monetary benefits across APAC. Other than India, China is claimed to be another potential revenue pocket, which held a valuation of USD 400 million in 2017. All in all, with appreciable number of countries inclining toward renewable space, in addition to the innumerable governmental efforts to deploy solar energy in public infrastructure, solar street lighting market is slated to exceed USD 5 billion by 2024.