U.S. industrial boiler market to gain much of its overall valuation from the food & beverage sector by 2024

U.S. Industrial Boiler Markethas recently witnessed Miura showcasing its range of efficient, reliable, and safe industrial boilers at the AHR Expo 2018. The company, a prominent player of the U.S. industrial boiler industry and a global leader in innovative steam boiler technology, has lately emerged as the choicest of companies chosen across the U.S. and Canada for boiler installation and maintenance. Miura’s product spectrum has undoubtedly triggered a competitive storm in U.S. industrial boiler market, for the simple reason that the company is fanatically meticulous about ensuring the production of safe and reliable systems with high efficiency for its clientele, ranging from food and beverage processors, brewers and distillers, and hospitals, to metal processing firms, paper mills, and textile/carpet manufacturers. Having categorically been labelled as one of most lucrative hubs for industrial growth, the U.S. today stands nearly at the focal point as far as energy sector is concerned. Consequently, U.S. industrial boiler market, despite being a very niche segment, has emerged as one of most profitable verticals of the global boiler industry. As a matter of fact, in 2016, the U.S. industrial boiler market size was recorded at a modest USD 450 million, pertaining to the product’s widespread demand across the chemical and food sectors. 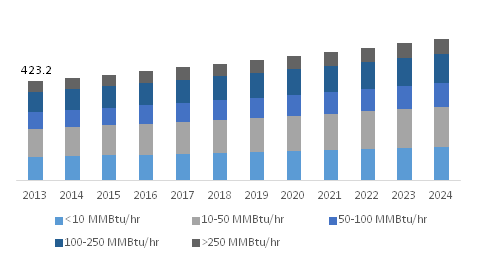 The food & beverage domain stands as one of the most remunerative end-use verticals for U.S. industrial boiler industry. Boilers, being typically used for providing thermal energy, improving efficiency, reducing fuel wastage, increasing heated water quality, prevention of fouling, balancing mineral content, and many more related functions in the F&B sector, are undeniably one of most indispensable equipment in food companies. In consequence, this has provided a major impetus to U.S. industrial boiler market size from the F&B sector. Not to mention, the U.S. food industry can indeed be enlisted among one of the most lucrative business spheres in the country, already having recorded its name in the billion-dollar space. Subject to the rapidly changing lifestyles and meal consumption habits, coupled with rising number of investments in novel food processing units that demand the installation of highly productive boilers, U.S. industrial boiler market size is indeed likely to witness a major boost over 2017-2024 from the food & beverage applications alone. Estimates claim that the F&B sector had accounted for over 10% of the installed capacity of U.S. industrial boiler industry, and may hold quite some share percentage in the ensuing years as well.

Get a Sample Copy of this Report:@ https://www.gminsights.com/request-sample/detail/832

While the food and beverage sector indeed holds pivotal importance as a profitable end-use domain for U.S. industrial boiler market as far as revenue generation is concerned, it is prudent to mention that these products are being used across other business spheres as well, such as the chemical, metals, and the paper sectors. As on today, the primary goal of most business players revolves around GHG emission reduction and environmental safety. Evidently, companies partaking in U.S. industrial boiler industry share have also been attempting to replace the fuel source in industrial boilers so as to achieve a carbon-free operational process.

An instance validating the aforementioned pointer is that Monolith Materials, a next-gen manufacturer of natural gas-based carbon black, has recently signed a deal with the Nebraska Public Power District – Nebraska’s biggest electric utility, that aims to replace its current coal-fired boiler with a hydrogen-fired boiler at the Sheldon Station plant, Hallam, in Nebraska. Reportedly, the new industrial boiler will be designed to generate 125 MW electricity that would be sufficient to power around 150,000 households. The deal would indeed mark major significance in U.S. industrial boiler market, given that it would not only enhance the production capacity at the Nebraska utility, but would also help considerably reduce carbon and GHG emissions. Riding along the hallmark of the same, other companies are expected to undertake pivotal steps to replace the fuel source with one that is environment-friendly. Indeed, this would provide numerous growth opportunities for U.S. industrial boiler industry players, and would simultaneously help augment the revenue graph of this regional business sphere. Incidentally, analysts forecast the U.S. industrial boiler market size to be pegged at USD 600 million by 2024