An outline of application spectrum of mixed reality headsets market, Global industry to record a phenomenal CAGR of 35% over 2017-2024

The phenomenally broadening application horizon of AR & VR technologies has had a massive impact on myriad verticals. Mixed reality headsets market, in this regard, has been rather a prominent vista of the smart technology domain, having enrolled its name in the billion-dollar fraternity in 2016. The paradigm shift in consumer preferences, particularly in the entertainment sector has been one of the topmost drivers fueling the mixed reality headsets industry demand. Gaming, which is a pronounced vertical of the entertainment industry, has had quite an impact on MR headsets market size over the years. The trend can be validated from the recorded disruption in the gaming industry, in terms of technological interferences – a rather commendable journey from the black and white 2D games to the much recent Pokemon Go, a vivid example of the incorporation of augmented reality platform in gaming. The success story of the MR headsets market from gaming applications can further be cited with some popular games incorporating this technology including Ingress, Geo AR, Real Strike, AR Invaders, and Invizimals: The Resistance. Not to mention, the gaming sector or rather the entertainment industry on the whole is certain to open synonymous growth opportunities for the mixed reality headsets industry players in the ensuing years. In fact, as per reliable estimates, in the coming seven years, the augmented reality headsets market is estimated to record a staggering CAGR of 70%. 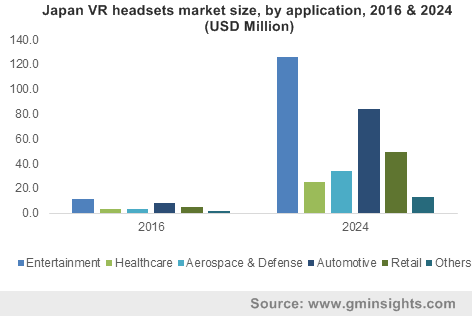 However, speaking of the commercialization potential of mixed reality headsets industry, the other domains including the likes of healthcare, education, industrial, manufacturing, and retail, are also emerging as strong contenders in the application landscape of this fraternity. Below is a concise overview of the MR headsets industry trends in the healthcare and education verticals:

The education sector has been one of the top-notch verticals having witnessed a disruptive digital transformation over the recent years. In fact, with the penetrating technological interferences in the education industry, mixed reality headsets, in all likelihood, may become a vital component of the learning process. In fact, as per experts, the incorporation of these technologies has significantly improved the interest and delivery quotients in teaching – a prime reason justifying the deployment of these headsets in the teaching, training, and tutorial programmes.

One of the prominent instances validating the potential of MR headsets in education industry is Microsoft’s arguable claim of positioning the HoloLens and Windows Mixed Reality as the future of education. In a recent turn of events, Microsoft collaborated with Liflique, a visual education company that delivers digital science curriculums for students by using the MR and AR technology, to introduce augmented learning to prep schools in California.

Get a Sample Copy of this Report:@ https://www.gminsights.com/request-sample/detail/2218

Not only the private entities, the government as well as the education ministries are further introducing ample initiatives to harness the potential of mixed reality headsets in the education vertical. Citing an instance, the French Ministry of National Education, reportedly reviewed its national curriculum, to add in the use of these devices in the learning channels. Such efforts undertaken by the government and private bodies are overt to massively proliferate MR headsets industry growth from education applications.

Given the enhanced capabilities of these devices in diagnosis and medical treatment, healthcare sector has been another renewed application domain, massively swayed by the MR headsets incorporation. One of the major penetration areas where MR headsets market, as per experts, will unveil slew of opportunities is the precision medicine industry. Speaking along similar lines, in January, at the World Economic Forum in Davos, Bill McDermott, the CEO of SAP, quoted the personalized medicine with incorporation of MR technology to be the future of healthcare.  Reportedly, these technologies are being incorporated in the medical fraternity to bring a shift from analog to digital, in terms of both patient care as well as the treatment models. The capability of this technology to visualize large data silos and enable a broadened research in the myriad medical fields such as gene sequencing, chronic disease treatment, has further provided a substantial impetus to MR headsets industry share.

In terms of competitive rivalry, both the established players such as Google, Apple as well as the start-ups are exploring their capabilities in the evolving MR headsets market. Citing a recent instance, in September, this year, NuEyes, a U.S. based startup proclaimed its plan to launch smart glasses, which would aid people with impaired vision. It is prudent to mention that the three billion-dollar healthcare sector is certain to unlock a range of opportunities for the mixed reality headsets market players over the ensuing years.

All in all, the vast portability potential of MR headsets industry players has just begun to unfold. The transformation in competitive hierarchy is anticipated to be the most intriguing trend to watch for in the coming years. Not to mention, technological interventions and cost will be the topmost parameters outlining the success dimensions of the market players.