The evolving demand for reliable & efficient heating systems have had a perpetual impact on electric underfloor heating market, with regards to its profitability landscape. Over the years, there have been a plethora of strict regulatory compliances focusing on energy conservation and green building construction which have further massively proliferated electric underfloor heating industry trends. A notable instance that validates the aforementioned aspect is of the German government launching the Energy Saving Ordinance initiative to reduce the carbon footprints. Another initiative validating the increasing deployment of electric underfloor heating systems is the Energy Efficiency Directive of 2012 focusing on energy efficient renovations to retrofit at least 3% of government establishments across the European countries. It is prudent to mention that not only the government bodies but also the private entities such as Siemens, Warmup, Schneider Electric, Danfoss, Honeywell, Nexans, Mitsubishi, and Sensata Technologies, constituting the competitive landscape of electric underfloor heating market, in response to these building standards and codes to limit energy consumption, are vigorously innovating their product portfolios to come up with advanced heating technology for residential  and commercial environments. Such moves are overt to leave a substantial impact on electric underfloor heating industry share, which as per estimates recorded a valuation of USD 1.5 billion in 2016. 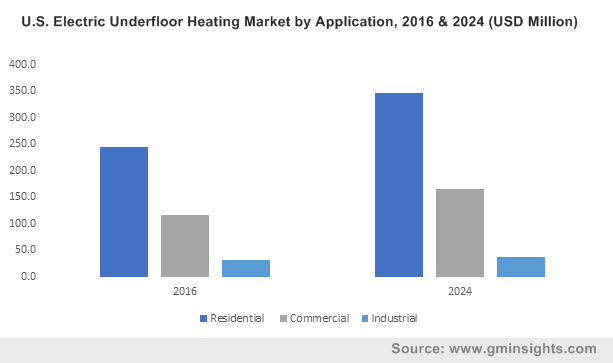 In conjunction with the initiatives undertaken by private and government companies toward energy consumption, industry analysts also speculate the increasing rate of disposable income to be a vital factor favoring electric UFH installations. According to reports, in FY 2016, the UK household disposable income was record at USD 34,930, which was USD 790 higher than what was recorded in 2015. These statistics elicit a clear picture of the rising trend of installing high value & energy efficient heating systems. Given the low power consumption and heating cost associated with electric UFH systems than the conventional fossil fuel based heating systems, analysts are anticipating electric underfloor heating market to chart a lucrative roadmap in the ensuing years. As per the latest report compiled by Global Market Insights, Inc., the global electric underfloor heating market is expected to witness an annual growth rate of 6% over 2017-2024.

Reportedly, the massive demand for efficient heating technologies, particularly from the residential and commercial sectors, is one of the major factors profoundly influencing electric underfloor heating industry size, courtesy – the increasing rate of restructuring and retrofitting activities across these sectors. Citing an instance, the recent announcement of Saudi Arabia’s plan to invest USD 20 billion for retrofitting and restructuring activities in the U.S. has considerably propelled the regional electric underfloor heating industry share. According to reliable reports, it is found that even the basic energy retrofit program implemented on the existing buildings can provide significant economic and environmental benefits. In fact, a basic or level 1 energy efficiency retrofit program targeting the residential building stock could significantly reduce the electricity consumption by 10,054 GWh per year and carbon emission by 7.611 million tons per year.

Get a Sample Copy of this Report:@ https://www.gminsights.com/request-sample/detail/2130

Taking into consideration the geographical landscape, UK is one of the leading regions practicing strict regulatory compliance and energy standards toward improving energy consumption and curbing GHG emissions. Owing to such measures, the GHG emissions across Europe were plumped by 22%, recording a significant reduction of 1,265 million tons of CO2 since the 1990 level. Add to this, in the year 2015, U.K. introduced an energy saving directive which asserted on the achievement of carbon-neutral buildings target by 2050 and reportedly claimed to reduce the energy consumption across new buildings by 25%. As per the estimates, U.K. electric underfloor heating market is slated to register a CAGR of 7% over 2017-2024.

North America and APAC are further anticipated to emerge as strong contenders in the global electric underfloor heating market landscape, with expanding infrastructure sector and increasing appetite for advanced heating technologies. Not to mention, the growing emphasis on energy conservation and curbing GHG emissions will further fuel the global industry demand. Japan and China have massively contributed to the APAC electric underfloor heating market, recently, holding 15% and 36% of the regional share in 2016, respectively.

Taking into account the massive penetration of these systems globally, the competitive landscape of electric underfloor heating market is overt to be dynamic. In a bid to sustain the market position, industry players are anticipated to adopt M&As, product upgradations, and geographical expansion as their key growth strategies. In terms of commercialization, Global Market Insights, Inc. claims the worldwide electric underfloor heating market to exceed a valuation of USD 2.5 billion by 2024.