Geosynthetics market to amass huge profits from geotextiles over 2017-2024, road construction to drive the application landscape

The profitability quotient of geosynthetics industry is market is forecast to escalate tremendously over the ensuing years, primarily augmented by the transformative construction industry. In response to the material being typecast as one of the well-established construction materials for environmental and geotechnical applications, geosynthetics industry, in the year 2016, pegged a valuation of USD 7 billion. It goes without saying that these synthetic materials have had played an instrumental role in resolving critical civil engineering issues since decades, where deployment of conventional construction materials are considerably restricted. However, research advancements of recent years have widened the application horizon of geosynthetics market to such an extent where construction workers are readily seeking to exploit the maximum potential of the materials using more powerful construction methods and design. 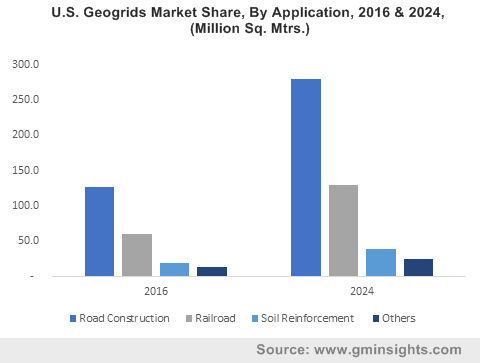 Geotextiles, an integral product vertical of geosynthetics market, have been experiencing a preferential position in today’s construction projects such as upkeep of roads, dams, harbors, airfields, and canals.  This is due to the fact that non-woven geotextiles provide viable solutions to projects where conventional granular construction materials are not readily available. While civil workers were initially reluctant of deploying these new filter materials, the notable difference it has brought in designing the base and stabilizing the terrain, has led to an increased geotextile consumption in repair activities. Aided by the benefits of its inherent superior properties like permeability, retention, porosity, retention, and tensile strength, experts claim that geotextile market from pavement repair applications is expected to exceed USD 480 million in 2024.

Get a Sample Copy of this Report:@  https://www.gminsights.com/request-sample/detail/2254

A precise archive of the application diversification of geotextiles in massive constructional projects:

A glimpse into the competitive landscape of geosynthetics market

The commercial production of geosynthetics involves raw materials like PVC, polyethylene, polypropylene, EPDM, and Polyester. Thus, it is quite conspicuous that any fluctuations in the price trend of these intermediates would have a direct impact on the revenue graph of geosynthetics industry, on account of their extensive demand from other burgeoning domains.  Companies partaking in geosynthetics market, in a bid to respond to this challenge, are increasingly focusing on production capacity enhancement and strategic collaborations to expand their business beyond regions. For instance, toward the end of last year, Groupe Solmax, the Canadian based geosynthetics market giant, acquired Quebec headquartered GSE Environmental from a private equity firm named Littlejohn & Co. and funds owned by investment manager, Strategic Value Partners.

Amidst such a backdrop where smart construction, a blend of operational efficiency and environmental viability, has become the prime focus of civil engineering sector, it is undeniable that geosynthetics industry is yet to unfold a slew of opportunities. Add to it, the stringent environmental norms enforced by international regulatory bodies like EPA and REACH on constructional projects will further play their cards in complementing the overall business growth in the coming years. As per Global Market Insights, Inc., in terms of commercialization, global geosynthetics market size is slated to exceed a valuation of USD 12 billion by 2024.