Unveiling a regional outline of eubiotics market: U.S. to come up as a pivotal regional growth ground over 2018-2024

Strict embargoes on antibiotic growth promoters, subject to the associated health concerns have indeed led to a spike in eubiotics market demand worldwide. Incidentally, since majority of these antibiotic growth promoters were discredited by regulatory authorities as well as consumer associations, researchers have been extensively investing in producing animal feed additives that are free from chemical intermediates. This is rather evident from the increased adoption of NGPs (Natural Growth Promoters) by livestock farmers for poultry nutrition, a vital factor backing the pronounced stance of eubiotics industry in the animal feed sector. 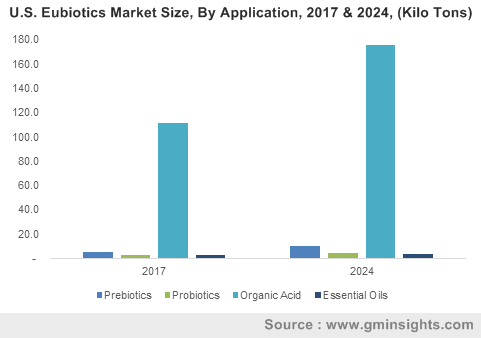 Rooted from a Greek terminology, Eubiosis, the main purpose of eubiotics is to maintain an optimal balance of microflora in gastrointestinal tract, that ultimately results in improved health status and performance of farm animals. Victoriously thriving on this criteria, the major products including probiotics, prebiotics, organic acids, and essential oils, falling under the umbrella of eubiotics market, claim to regulate animal immune system effectively. Though the product palate of the marketplace is quite diverse, it would not be incorrect to say that eubiotics market players are likely to witness significant monetary benefits from prebiotics vertical.

Speaking of the regional profiling, U.S. has been one of those countries where regulatory injunction in antibiotics sector has predominantly driven the regional eubiotics market outlook. In 2013, the U.S. FDA issued guidance implementing plans to phase out the usage of antibiotics with medical importance in livestock for production purposes.

Get a Sample Copy of this Report @ https://www.gminsights.com/request-sample/detail/457

As per recent research estimates, nearly 40% of finishing hogs and 50% of broilers in the U.S. received antibiotics for production purposes. The swelling utilization of AGPs in animal nutrition often increases the development of drug resistant bacteria. These bacteria have been deemed as a major threat to human health, given their high transmission probability through food-chain or other contaminated contacts.

Against the backdrop of this slightly distressing scenario, FDA’s enforcement has undoubtedly helped to reduce deployment of AGPs for animal feed purposes indirectly propelling the sales graph of regional eubiotics market. As per a report by Global Market Insights, Inc., U.S. eubiotics market size is projected to cross close to USD 480 million by the end of 2024.

Europe is also paving an opportunistic path for eubiotics market, with Germany, UK, and France as chief growth avenues. The European belt is likely to procure a significant percentage of the overall industry share by 2024. Europe’s projected supremacy may be attributed to the firm regulatory amendments implemented by the European Union with regards to antibiotics’ ban in tandem with the increasing prevalence of livestock associated diseases. European Union, for the record has also approved 40 vital probiotics preparation across the continent for animal nutrition, which in essence will add a renewed dynamism to the regional eubiotics market growth.

Another pivotal revenue contender in the global landscape of eubiotics market is China. Indeed, China organic acid market is expected to observe a CAGR of 8.5% over 2018-2024, given that these products aim to lower bacterial contamination and even serve to be antimicrobial agents, preventing mould growth in animal feed. The surging demand from the rising middle class populace in the region for meat and dairy products has also impelled the China eubiotics market growth.

Despite the massive opportunities ahead, the dearth of proper evaluation process along with standardization issues in maintaining essential oil blends and microorganism strains are somewhat deterring eubiotics industry growth. Companies, however, have been taking significant measures via research investments to come up with advanced sustainable feed technology that ensure high productivity, yield quality, and efficiency. With such incessant efforts undertaken by leading giants along with the strict governmental norms banning the use of AGPs, eubiotics market is deemed to carve out a profitable roadmap in the years ahead, exceeding a valuation of USD 4 billion by 2024.