With the increasing popularity of nonmetallic thermosetting plastics, glass reinforced plastic GRP piping market has emerged as a prominent business sphere since the last few years. Glass-reinforced plastic has now come up as one of the effective alternative materials over metal parts for various construction applications such as sewage treatment and water supply. Oil and gas industry behemoths, in addition to regulatory bodies, have also been recommending the installation of GRP pipelines pertaining to their excellent corrosion resistance capability. 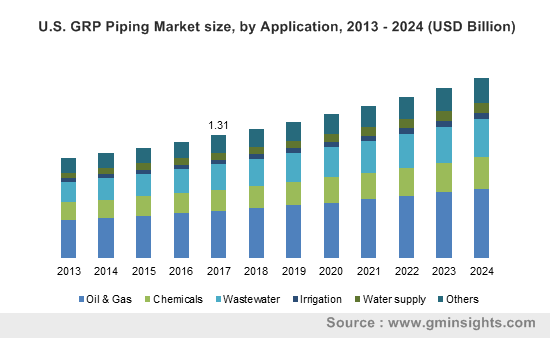 Many of the players in oil & gas industry, especially in MEA have already invested millions of dollars for replacing metal pipelines with glass reinforced plastic pipelines. Indeed, the replacement of traditional metal pipelines with GRP piping has helped them minimize the maintenance cost and ensure hassle-free operations, propelling GRP piping market trends. The growing deployment of GRP pipelines has also helped to minimize any operational breakdowns across numerous industries. In Saudi Arabia, a slew of companies have successfully deployed plastic composite materials across oil flowline networks to reduce system costs and avoid corrosion. In fact, for increasing the adoption rate of non-metallic products, some of the companies have set a few objectives which are proving to be rather profitable for the giants in glass reinforced plastic piping industry. A couple of these objectives are outlined below:

Citing an instance of the increasing deployment of GRP pipelines across Saudi Arabia, the world’s largest oil and gas producer, Saudi Aramco has recently taken an initiative to use reinforced thermoplastic pipes in oil flowlines. The company noted that any constructional breakdown in flowlines mainly due to corrosion during working operations leads to loss of working hours that could increase the overall project cost. In the oil & gas sector, specifically, pipelines are mostly deployed to transfer fluids which contain water and sufficient amount of CO2 that tends to increase the rate of corrosion in metallic flowlines. Considering the aforementioned fact, O&G companies are now prominently giving preference to plastic piping which would also help them to achieve cost savings by reducing maintenance expenditure.

Get a Sample Copy of this Report @ https://www.gminsights.com/request-sample/detail/2696

Driven by the range of applications these pipes are deployed in, such as exploration, crude transmission, sub-sea piping, and refinery piping, the oil & gas segment accounted for 30% of the overall glass reinforced plastic piping market share.

Plastic pipelines are increasingly being installed for irrigation, water disposal, telecommunications, and water distribution purposes as well, apart from the oil & gas industry. Mining giants are also heavily relying on plastic pipes for slurry disposals, dewatering, and water distribution. Pertaining to specific properties of plastic piping materials such as abrasion resistance, corrosion resistance, and ease of handling, plastic pipes are becoming popular as an effective alternative over metallic piping across mining industry. Taking into account the surging applicability of plastic piping, the South African Plastic Pipe Manufacturers Association (SAPPMA) has set standards for plastic pipe producers to encourage the development of high quality and sustainable plastic piping. The growing involvement of regulatory bodies in product development and quality enhancement activities is thus slated to boost glass reinforced plastic piping market share over the years ahead.

In the last few years, the manufacturing capacity of GRP piping industry players has been increasing tremendously due to the growing adoption of plastic pipes. Most of the established manufacturers have also extended their reach across the developing economies. In most of the countries, the regional governments have been encouraging pipe manufacturers by investing in several construction projects such as irrigation, sewage control, and many more. For instance, in order to use GRP pipes in irrigation and water projects, recently, the New Zealand government demanded pipes of specific diameters on a large scale. In fact, myriad vendors and manufacturers have now begun to establish themselves in New Zealand glass reinforced plastic piping market considering the long-term business opportunities in the nation.

The increasing usage of GRP in numerous projects from irrigation to mining and oil & gas to sewage treatments is likely to enhance the future product demand on a large scale. The rise in product requirement is expected to generate lucrative opportunities for the players in glass reinforced plastic (GRP) piping market. Powered by the shifting trends toward replacement of metallic piping with plastic piping systems mainly across the mining and oil & gas sectors, GRP piping market is forecast to generate a revenue of more than USD 8 billion by 2024.