Over the recent years, the global aerospace landing gear market share has observed an exponential growth owing to a significant uptick in air passenger traffic and the consequent increase in the demand for lightweight aircrafts. Owing to the criticality of these subsystems, which support aircraft weight during landing and ground operations, the commercial airlines have focused on incorporating high-grade landing gears in the recent times. Moreover, the swift escalation in the number of commercial aircraft production across the world has emerged as one of the foremost factors to have contributed toward rapid growth of the aerospace landing gear industry. 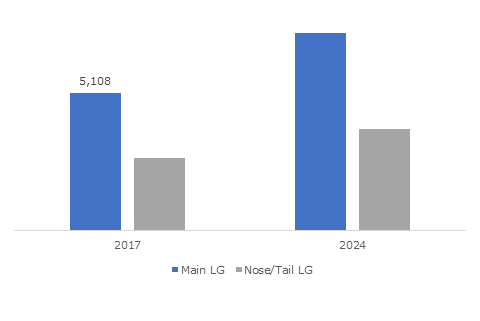 Elaborating further, the U.S. based Boeing for instance, delivered an astonishing 763 commercial airplanes in the year 2017. Reportedly, the aerospace behemoth surpassed its previous delivery record set in 2015. In this context, it would be prudent to mention that 2017 was the seventh consecutive year that registered a decent increase in the delivery of commercial aircrafts by foremost manufacturers.

Get a Sample Copy of this Report:@ https://www.gminsights.com/request-sample/detail/2343

Concurrently, it has been observed that there has been a gradual uptick in the number of collaborations being formed between firms operating in MRO (maintenance, repair and operations) industry and various commercial microsatellites & orbital transportation service providers. Needless to mention, these collaborations have invariably boosted the commercialization scale of the overall aerospace landing gear market in the recent times. The U.S. headquartered Triumph Group for instance, has recently teamed up with a systems integrator specializing in microsatellite services, Sierra Nevada Corporation (SNC), to provide landing gear system for the Dream Chaser spacecraft.

In this regard, the agreement mentions that Triumph Group’s Washington based Integrated Systems business unit will work together with SNC to supply the main and nose landing gear to a lifting-body vehicle, the Dream Chaser. Reportedly, this spacecraft would be utilized to support NASA’s Commercial Resupply Services 2 project that is slated to resupply the International Space Station. The partnership is being increasingly termed as quite remarkable in the aerospace landing gear industry given that the contract further includes the supply of integrated actuation solutions for the landing gear and door systems which would be developed by both the firms.

Speaking in the similar context, numerous dominant commercial and defense aircraft manufacturers around the globe have continued assisting airline operators to leverage exchange offerings of landing gears and overhaul of performing equipment as well. Powered with a robust global network of repair service centers, these aircraft manufacturers are well-positioned to lower maintenance time and provide reliable landing gear repair services to major airlines. To cite an instance of the same, Boeing had declared the launch of its new landing gear exchange programs in 2014 for Air Canada’s 777-200LE (Longer Range) and 777-300ER (Extended Range) airframes.

As per the contract, the American aerospace behemoth had agreed to provide certified and fully overhauled landing gear shipsets for a total of 23 aircrafts belonging to the largest domestic and international airline in Canada. Apparently, such cost-effective offerings by prominent aircraft manufacturers have optimistically influenced and proliferated the aerospace landing gear industry space over the past few years.

The prominent aerospace regulating authorities such as Federal Aviation Authority and Civil Aviation Safety Authority have laid out strict guidelines to deploy advanced technologies including Radio-Frequency Identification and wireless sensor network to enhance operational safety of airplanes. Furthermore, the increasing adoption of advanced landing gear systems across major airlines would impel product penetration, cite analysts. Driven by a rapid increase in commercial aircraft deliveries coupled with the burgeoning air passenger traffic, the aerospace landing gear market is slated to grow at an exceptional pace in the years ahead. In fact, as per a research report collated by Global Market Insights, Inc., the revenue portfolio of aerospace landing gear industry is estimated to surpass USD 21 billion by 2024.