Luxury boating, being one of the most popular leisure activities in the United States, has led to the U.S. recreational boating market emerging as a highly profitable industry. In 2018, the National Marine Manufacturers Association (NMMA) announced boat sales in the U.S.to have reached a 10-year high, encouraging boat manufacturers to further expand their production capacity to meet the rising demand. NMMA data shows that unit sales of new powerboats reached 262,000 in 2017 increasing 5% when compared to unit sales in 2016. 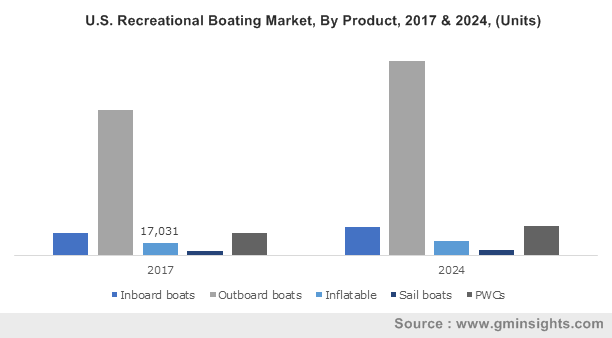 Incidentally this is the highest level of boat sales registered in the U.S. in the past 10 years – a fact that provided a boost to the U.S. recreational boating industry. As per estimates, total marine expenditure in 2017 amounted to $39 billion which included spending on not only new boats, but trailers, engines, services and accessories. Boat manufacturers also responded to the demand with the building of new plants and expanding production capacity. In 2017 the U.S. recreational boating market size was valued at $20.5 billion and is expected to depict a commendable upsurge in the years ahead.

The Bureau of Economic Analysis boasts of valid data to support the growth of the U.S. manufacturing industry. Estimates by the organization claim that U.S. manufacturing gross output increased to $6.228 trillion in the fourth quarter of 2017. The strong economy of the country is indeed bolstering the boating expenditure and new boat sales in the country as manufacturer optimism and capital spending continues to hit a record high. The growth trajectory of the U.S. recreational boating market is expected to be rather exponential in the ensuing years, as new products ranging from small fishing boats to large luxury yachts make an entry into this business sphere.

Get a Sample Copy of this Report:@ https://www.gminsights.com/request-sample/detail/2806

Statistics indicate that over 87 million adults participate in recreational boating in the U.S. and engage in travelling by boat, sports activities or fishing. When the country was in the grip of a major economic crisis in the last decade, the U.S. recreational boating industry initially took a hard hit. However, with the return of financial stability, the U.S. recreational boating market has witnessed renewed vigor with 12 million boats being registered and documented in 2017 across the country. The NMMA listed Florida as the state leading the number of registrations in 2017 followed by Minnesota, Michigan, California and Wisconsin with significant growth in the registration of recreational boats in the states of Oregon, Ohio and California. Unsurprisingly the Great Lakes region also accounted for a major portion of the registrations with most boats per capita.