Increased infrastructure development activities around the globe have generated considerable remuneration for the hoist chains market, with the rising demand for material handling equipment across construction and energy sectors. The accelerated growth of the automobile and aerospace industries have further influenced the demand for specialized equipment like electric hoists in the manufacturing segment. Requiring much less maintenance as compared to wire rope hoists, chain hoists serve as a very economical alternative to expensive cranes in different environments, propagating the hoist chains industry. A continuous upsurge in energy production and consumption will necessitate the development of conventional and renewable energy power plants over the coming years, propelling the global hoist chains market revenues, which exceeded USD 4.5 million in 2017. 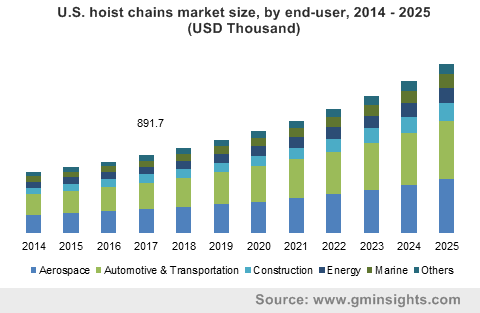 Reports have shown that worldwide, the electricity generation had increased by 2.8% in 2017, helped by the construction of numerous power plants in many countries and the uninterrupted supply of resources for electricity production. Rapidly expanding natural gas exploration projects have encouraged the setting up of new gas power stations in several regions, while the declining costs of erecting a solar or wind energy farm have strengthened the renewable energy sector. Hoists play an important role in lifting, erecting or moving components while building solar farms and windmills, and the growing number of renewable energy projects will extremely proliferate the hoist chains market.

Experts have predicted that in North America alone, the energy consumption could reach up to 157 quadrillion BTU by 2025, indicating the prospects of new electricity generation plants and the involvement of the hoist chains industry. The communications segment is estimated to utilize nearly 20% of all the world’s electricity by 2025, additionally highlighting the need for more energy production units. The International Energy Agency (IEA) has informed that in 2016, renewables had contributed the maximum capacity addition, with around 165 GW of new production capacity. As evident, a spurt in energy infrastructure projects globally will fuel the hoist chains market expansion, since new undertakings imply the requirement for efficient material handling equipment.

Get a Sample Copy of this Report:@ https://www.gminsights.com/request-sample/detail/2898

Growth opportunities for the hoist chains market over 2018-2025 from the energy sector:

In an attempt to lower the overall cost of utilities, power companies and governments around the world has constructing giant solar PV farms, ensuring lucrative prospects for several material handling and support industries. Touted as being the world’s largest solar farm on completion in 2019, the USD 4 billion Benban solar park in southern Egypt will consist of over 5 million PV panels. With such massive facilities comes the need for grid infrastructure to support the supply of energy, which translates to more demand for the material handling equipment companies and, invariably, for the hoist chains industry.

Saudi Arabia also has an ambitious project in the pipeline to build a solar farm that is at least 100 times bigger than any existing ones and is expected to be completed by 2030. There are confirmed schemes in China and India as well to develop giant solar power plants to meet the fast mounting energy demand in the countries. In North America, a 500-acre solar farm has been proposed in the Hancock Country, Indiana, while a Canadian company has agreed to build the largest solar plant in the state of Texas and will complete the construction by 2019.

Owing to the flexibility, power and compact size, electric chain hoists are quite useful in wind energy turbines, not only helping to lift the turbines during construction, but also inside the turbines to help lift equipment, making the maintenance work easy. As such, vast wind farms, such as the Hornsea Project One being built near U.K., will deploy hoists in the construction phase as well as over the turbine’s lifecycle. The project is to be completed by 2020 and will be the biggest offshore wind farm in the world. Separately, TenneT from Netherlands has planned to build an artificial island around 100km off the Yorkshire coast in U.K. by 2027, which will house a mammoth wind farm capable of producing over 30 GW of power.

With more than 341,300 wind turbines spinning worldwide at the end of 2016 and the extensive wind farm projects in the making, the hoist chains market stands to gain tremendous proceeds over the forecast period from the inevitable need of electric chain hoists.

All in all, the exponential rise in electricity demand will amplify the efforts of countries to extend their energy generating capacities, building both, renewable and conventional power plants, boosting the hoist chains market revenue. Driven by the global increase in industrialization and the overall economic development witnessed worldwide across myriad topographies, the hoist chains industry will surpass USD 9.5 million in terms of earnings by 2025.