Thermic fluids market to garner hefty proceeds from rising deployment of CSP projects, China to hold a significant proportion of the industry valuation by 2025

Over the past few years, the global thermic fluids market has witnessed phenomenal growth in its commercialization potential, given the rapid expansion of pharmaceutical, F&B, HVAC, chemicals, and oil & gas industries. If reports are to be believed, the industrial applications of thermal fluids are diverse, ranging from simple transfer of heat from devices to advanced multi-loop systems performing several functions in manufacturing operations. Given the number of industries that use fluid transfer techniques in myriad applications, it does not come as a surprise that this business space in the year 2017 registered a significant remuneration portfolio of USD 2.4 billion, with mineral oil, aromatics, propylene & ethylene glycol based thermic fluids accounting for a significant share of thermic fluids market. 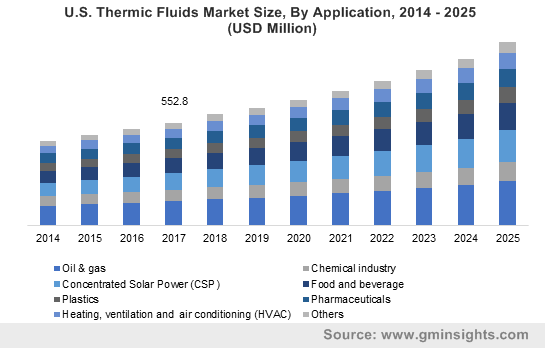 Silicone & aromatics based thermic fluids to drive the product landscape

The mineral oil based and glycol based thermic fluids are also gaining remarkable demand, on account of which the segment will contribute considerably toward global thermic fluids industry share. Reports in fact estimates that in terms of revenue share, the glycol based thermal fluids market will record a y-o-y growth of 6% over 2018-2025, subject to the rising demand from food processing applications.

Get a Sample Copy of this Report:@ https://www.gminsights.com/request-sample/detail/2940

Speaking along similar lines, it is prudent to mention that the food & beverage sector has established itself as one of the lucrative growth avenues for the thermic fluids market expansion. Improved standard of living coupled with dynamic growth in the worldwide population has in fact favored the ethylene glycol thermic fluids demand in the recent years. For the record, wineries, dairies, breweries and other food processing companies require thermal fluids for heating, cooling, and dehumidifying. The food grade thermic fluid segment in this regard, is set up for some rapid expansion, while establishing itself as a lucrative investment avenue for thermic fluids market.

In addition to the robust industrial growth, the heavy investment in construction of concentrating solar power projects around the world has also been a pivotal factor driving thermic fluids industry trends. Given the extensive demand for heat transfer fluids in improving the overall efficiency of CSP plants, it is quite overt that with the increasing deployment of solar energy farms in several countries, the demand for thermic fluids will also witness an exponential growth. If reports are to be believed, U.S. and Spain are among the leading regions that have a large number of CSP projects with significant future investment scenarios. Estimates claim that Spain had CSP plants with operational capacity of approximately 2.3 GW in 2017 – more than any other country across the globe.

China is another lucrative region where CSP plants are gaining immense traction in the recent years. To be precise, China recently in June 2018 completed its large-scale commercial concentrated solar power plant. According to reports, the plant is equipped with 120 single-trough collectors, wherein the solar receiver transfers heat from the sun to the thermal oil at a very high efficiency with the use of thermic fluids. It wouldn’t be wrong to say that thermal fluids act as the interface between the solar energy input and the power block in the CSP plants, and therefore the increasing number of CSP projects in China will directly impact the regional thermic fluids industry share.

Dubai is another region which is expected to emerge as a profitable investment ground for the potential stakeholders of the global thermic fluids market. According the recent news, the construction of one of the largest concentrated solar power projects in the world has begun in the UAE, where the Dubai Electricity and Water Authority in collaboration with Saudi Arabia’s ACWA Power and China’s Shanghai Electric will be developing a 700MW project. Needless to say, these types of massive scale projects will draw lucrative growth avenues for the regional thermic fluids market in the ensuing years.

Driven by these aforementioned trends and strong application spectrum, the commercialization of the global thermic fluids market is expected to garner hefty returns in the coming years. A presumption validating the same is of Global Market Insights, Inc., that claims the overall business sphere to hit USD 4 billion by 2025.