The increasing awareness and demand for alternate and cleaner fuel worldwide has propelled the GCC natural gas market, taking it beyond the 40 billion-dollar mark in 2017. Natural gas plays an important role in the region’s industrial development where the domestic demand is rising, and emphasis is being poured onto reinforcing energy security. Proven to hold the largest reserves of oil and natural gas, the GCC (Gulf Cooperation Council) nations are endeavoring towards progressive adoption of LNG as an energy source along with diverging export avenues, boosting the GCC natural gas industry. 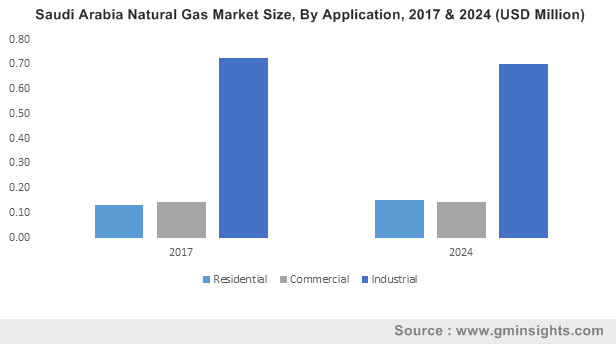 Since the advent of oil and gas production in the gulf countries, they have experienced unprecedented economic boom leading to high per capita income and the consequential rise in energy consumption, which is one of the highest in the world. Depending on the vast resource availability, the governments of these countries have spared no efforts in providing ample products and services for low prices along with free education, healthcare, cheap utilities and even cheaper gasoline. The region is now targeting to increase natural gas production through untapped sources and will expose new revenue prospects for the GCC natural gas market.

Elaborating on the steps taken by GCC nations, Qatar recently lifted a self-imposed suspension on the exploration of offshore North Field in the Persian Gulf, which has been identified as the biggest gas reserve in the world. The decision followed Qatar’s announcement of plans to increase its LNG production capacity from 77 to 100 mtpa. The development of the North field gas reserves will strengthen Qatar’s position in the GCC natural gas market, as it is already credited with being the most cost-effective and leading supplier of LNG for almost two decades. Saudi Arabia will follow suit and has committed USD 7 billion to push the upstream operations in order to develop the nation’s shale gas potential.

Get a Sample Copy of this Report:@ https://www.gminsights.com/request-sample/detail/2636

Influencing the GCC natural gas industry is the notion among experts that natural gas will be the preferred method of energy generation in the future, when stable energy production will be required in the areas where harnessing the wind or solar power is difficult. Compared to other fossil fuels, natural gas is considered to be relatively clean with almost 50% less carbon emissions besides 75% lower emissions of nitrogen oxide and other harmful particles. These characteristics have not only aided the acceptance of natural gas in industrial sector but also transformed the automotive market where vehicles running on CNG deliver excellent fuel efficiency and less emissions. With the continuous expansion of low cost supplies of LNG triggering the increased availability and consumption of gas, GCC natural gas market is predicted to exhibit a CAGR of 4% over 2018-2024.

Speaking on the utilization of natural gas, a World Bank data on energy use indicated that up to 21.6% of electricity generation in the world was from natural gas sources as of 2014. These statistics can be derived from the evolving regulatory policies in favor of sustainable energy resources and the need for balanced fuel diversification. One such measure is the “Energy Strategy 2050” plan by the UAE through which it aims to reduce the overall carbon footprint in the country’s power generation by 70% and raise the proportion of clean energy up to 50%. It is estimated that by 2040, the energy consumption in the Gulf will go up by 54% with natural gas representing 60% of this growth.

In another example citing the trend towards cleaner fuel in the GCC natural gas market, Oman LNG has announced the establishment of new gas driven power plant at their facilities in Qalhat. It is aimed at conserving and optimizing natural gas with minimum CO2 emissions.

Governments worldwide are enforcing the switch from coal-based power generation to natural gas sourced, with China and other emerging markets being the prominent transition points. According to reports, China’s requirement for LNG contributed for almost half of the total expansion of the natural gas segment. Evidently, China can be a lucrative market for gulf countries in case they have spare natural gas to export into Asia, where Korea and Japan are also major gas importers.

However, European countries could be a prime customer base for the GCC natural gas market, as the region witnesses cold weathers every year but has limited domestic natural gas supply. As per records, new sources of gas supply have not greatly emerged in Europe after various explorations, worsened by oppositions to unconventional methods of extracting natural gas. Europe is slated to rely on imports in the future and undertake projects to enable the transfer of natural gas from the GCC nations.

The GCC natural gas industry, with easy access to high-volume and low-cost opportunities is attracting foreign investments to supplement the growing demand for natural gas in residential and commercial applications worldwide. Backed by such a strong demand curve, the GCC natural gas market is slated to surpass a mammoth valuation of USD 50 billion by 2024.