The U.S. oil and gas infrastructure market has been expanding rapidly with the prevalence of space drilling and exploration activities over the last few years. Leading oil and gas suppliers have been involved in exploration and excavation activities mainly in the Gulf of Mexico and southwest region to meet the rising energy demand across the country. A research report on the annual energy requirement across U.S. and Canada has predicted that these regions would have to invest nearly USD 26 billion per year on the crude oil and natural gas midstream energy infrastructure development. 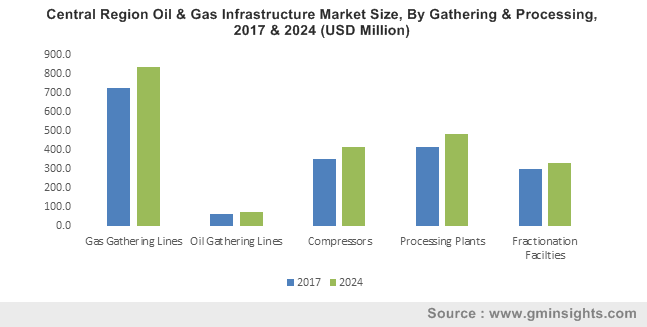 Rapid industrialization and an exponential rise in the population across U.S. are the principal factors that have been furling the energy demand across the country, thereby impelling U.S. oil and gas infrastructure market trends. The increasing concerns about the depleting fossil fuel resources and rise in the dependency on the Middle East countries for fulfilling the requirement of energy have also encouraged the U.S. government to invest heavily in the development of oil and gas infrastructure, further augmenting the industry.

The Shale Revolution across North America has indeed transformed the focus of the continent as far as oil and gas developments are considered. For the record, with the advancement of oil and gas infrastructure, the per day oil production of U.S has risen from 5 to 9 million barrels and natural gas production has risen from 55 to 72 billion cubic feet in the last few years. The transformation has seemingly occurred because of the rising involvement of businesses in the refining, processing, and transportation of oil and gas. So far, reports claim that most of the companies in oil and gas sector have invested approximately USD 390 billion for developing new infrastructure.

Elaborating on the technology intervention, oil and gas production companies have lately been adopting new technologies to improve the quality and quantity of extracts. The main factor that has encouraged oil and gas companies to increase fossil fuel production is the removal of the restriction on the export of crude oil. In 2015, the Congress government lifted the restriction of crude exports that has opened the doors for oil and gas companies to export natural gas. As of now, the government has engineered its focus primarily on Houston and Corpus Christi for infrastructure development investments. Houston is America’s oil capital through which government supplies crude to other countries. On these grounds, in 2017, the Southwest accounted for a 30% share in U.S. oil and gas infrastructure market pertaining to the presence of Barnett Shale and Eagle Ford in Texas.

Get a Sample Copy of this Report:@ https://www.gminsights.com/request-sample/detail/3013

Owing to the sudden rise in the production and transport of oil and gas, problems associated with traffic congestion have making their mark across the U.S. In addition, the increasing number of trucks which transport oil and gas have been becoming a major cause for the rise in the number of traffic accidents. In order to deal with such serious issues, the U.S. government has been forcing companies to deploy transmission pipelines from supply areas to market areas. In this regard, the companies have been investing to construct a cluster of facilities from gas wells to crude oil storage and treatment tanks. The whole process requires considerably sophisticated infrastructure development tools ranging from surface and lease equipment, oil, gas and NGL pipelines, gathering and processing, export terminals, and many more, that would most overtly expedite U.S. oil & gas infrastructure industry trends.

The shifting focus of the U.S. government toward the deployment of gas-fired power plants for fulfilling the energy needs of the country along with the rise in the export activities have been further accelerating the demand for various kinds of infrastructure development accessories. An increasing number of crude oil refineries and the relatively rising importance for enhancements, upgradations, replacements, and refurbishments of older facilities have also been contributing toward the development of U.S. oil and gas infrastructure industry. Driven by a growing number of oil & gas processing plants, U.S. oil and gas infrastructure market is poised to generate a revenue of more than USD 80 billion by the end of 2024.