Global minoxidil market valuation to surpass the billion-dollar mark by 2024, robust development of novel treatments to boost the industry expansion

Increasing prevalence of hair loss disorders and rising consumer awareness regarding available treatments have proliferated the minoxidil market, with several products containing the drug being sold globally. Improved marketing efforts by companies to promote hair growth products have helped expand the reach of the minoxidil industry, as upsurge in consumer spending towards healthcare has reaped tremendous monetary gains for the vertical. Incidentally, busier lifestyles of the global populace have led to unhealthy eating habits, which in combination with a rise in air and water pollution have caused innumerable people to suffer from ailments such as alopecia areata. 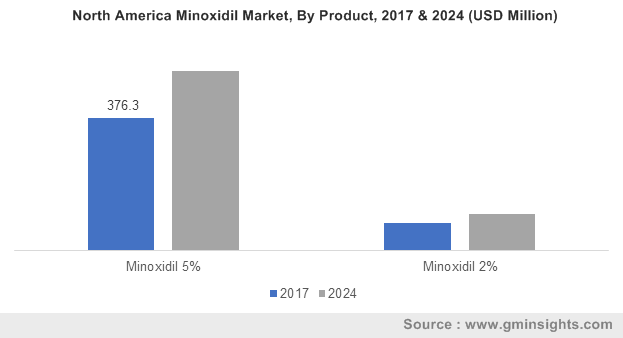 It is thus overt that continuous efforts by healthcare institutes to educate hair loss patients about the roots of their disorders and find suitable treatment options for them will fuel minoxidil market. Significant hair loss is common among people aged 50 or older, with many of them preferring to try out hair growing solutions being marketed. Some experts have said that almost 80% of cases for hair loss are hereditary and often younger population, around the ages of 20-30, start experiencing hair problems due to genetics, in addition to an increasingly stressful lifestyle.

As reported by the American Hair Loss Association, nearly two-thirds of men in America suffer some amounts of hair fall by 35 years of age, indicating that the minoxidil industry witnesses consumption from nearly all adult age groups. It has also been suggested that approx. 40% of women will experience visible hair loss by the age of 40, underscoring the immense potential existing for the global minoxidil market from products targeting women. With unhealthy sleeping routines and inadequate nutrition intake combined with pollutants faced in daily life, it is estimated that over the next few years about 147 million people will develop alopecia areata worldwide.

Get a Sample Copy of this Report:@ https://www.gminsights.com/request-sample/detail/750

Researches conducted on people having androgenetic alopecia showed that the group of men who were treated with 5% minoxidil, another group treated with 2% minoxidil and women treated with 2% minoxidil gave superior results as compared to the placebo groups. Such scientifically proven benefits have considerably boosted the minoxidil market growth and driven global consumers towards opting for suitable treatments. People from Europe have also displayed a penchant for shelling out part of their income to stop their hair from thinning and falling, since, according to reliable data, Europeans are most likely to experience baldness, creating a sizable customer-base for the minoxidil industry.

Despite being used for hair loss therapies for a long time now, minoxidil is yet to become the majorly favored treatment option due to lack of knowledge and the presence of few other alternatives. Companies, however, are attempting to develop novel therapies to help establish the prominence of the drug across all the target groups. In one such effort, an observational study has determined that taking minoxidil with spironolactone in one pill, which consists low doses of both, can help to counter female-pattern baldness. This represents an innovative approach to treating hair loss which can tremendously expand the scope of the minoxidil industry in terms of product development and application.

Elaborating further, spironolactone, a drug generally used to treat acne and high blood pressure, and minoxidil were ingested together in a pill by about 100 testers between ages 18 to 80 every day for 12 months. Spironolactone was use for inhibiting the effects of androgens which combine with enzymes to create a hormone that causes hair loss. Minoxidil, as part of the combination, worked to widen the hair fibers and for stimulating its growth. Majority of the testers experienced decreased hair fall and a fuller head of hair, with results being observed within 3 to 6 months.

In essence, the study demonstrated the potential of the minoxidil market if novel approaches are developed to support and enhance the outcome of the drug. Use of technology and subsequent growth of online market places will assist in improving the visibility of hair fall therapies and products. Anticipated to garner proceeds of more than USD 1.2 billion by 2024, the global minoxidil market consists of key suppliers such as Dr. R. Pfleger Chemical Factory GmbH, McNeil PPC Inc., Renata Limited, Kumar Organic products, Par Pharmaceuticals and Nanz MED Science.