Global telemedicine market set to garner over USD 130 billion by 2025, India to emerge as one of the most profitable growth avenues

Drastically changing the paradigm of the global healthcare space, telemedicine market has been gaining immense traction in the recent years owing to innovative and path-breaking technological solutions. Apparently, telemedicine is anticipated to become the most used and accepted method of diagnosis and prescription due to its numerous benefits. It has enabled healthcare professionals to access a patient’s medical records including computed tomography scans, medical resonance imaging scans, electrocardiogram, and X-rays remotely. 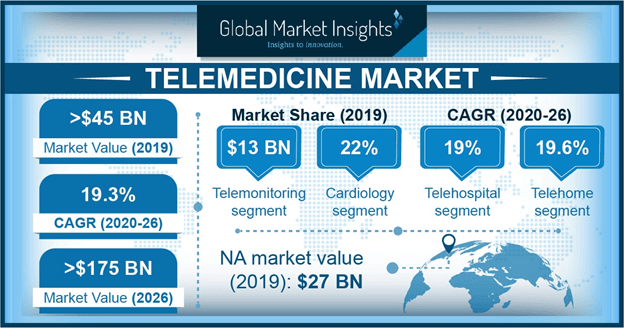 In this regard, taking note of a few reliable statistics would signify the growing clout of telemedicine industry in the global healthcare sector. Apparently, it is being said that telemedicine had about seven million users in the U.S. during the year 2018 and around 90 percent of physicians working on tele-health platforms. Notwithstanding the proliferation of telemedicine in the developed countries such as the U.S., it is quite imperative to take note of the fact that low-income nations and developing economies too are pouring in considerable resources in laying out a robust pathway for the expansion of telemedicine industry in their respective regions.

Telemedicine industry: A new horizon on the public healthcare landscape of India

In this regard, general consensus dictates that the requirement of a major intervention is on the cards, and digital technology can provide respite to the Indian healthcare system. Undoubtedly, telemedicine is one such prominent factor that can assist in bridging the gap and increase quality and accessibility of healthcare while reducing the cost of healthcare substantially. It has been well-documented that telemedicine has brought down patient and provider costs in the most remote hinterlands.

Get a Sample Copy of this Report @ https://www.gminsights.com/request-sample/detail/3129

In fact, the expansion of telemedicine market across India is gaining momentum in the recent past owing to various programs being undertaken by the national government and numerous other research organizations. Enumerated below are a few instances that highlight the significance of telemedicine industry in India’s current healthcare space:

Considering the positive impact of the aforementioned initiatives, it will not be incorrect to state that the telemedicine industry would be one of the key factors which would redefine the extension of quality and affordable healthcare to the citizens of India, especially the ones residing in rural areas. In fact, as per a research report compiled by Global Market Insights, Inc., India telemedicine market is slated to expand at an overwhelm y-o-y growth rate of 22.4 percent over 2019-2025.

With the rise of new-age technologies, telemedicine as a practice is going through transformational changes over the recent years and is gaining acceptance as a viable method of patient care. In an era of growing telecommunications network and increasing pace of integration between IT sector and healthcare industry, it is quite certain that the contours of the global telemedicine market – slated to surpass a remuneration scale of USD 130.5 billion by 2025 – indicate a highly-promising outlook for the worldwide medical care space.