The global battery materials recycling market has been gaining significant traction in recent years as more and more enterprises have started to adopt sustainable practices. With organizations becoming increasingly aware of the impact their operations have on the environment, they have been seeking ways to reduce & eventually eliminate their part in environmental degradation. 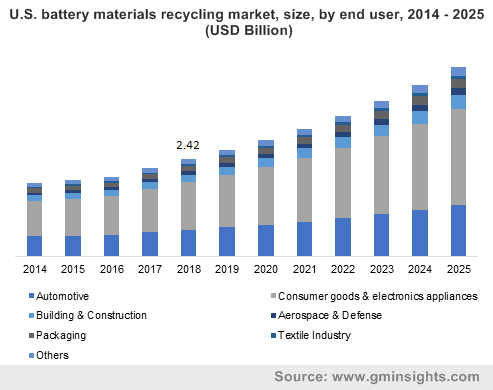 Moreover, with the projected decline of fossil fuels, renewable energy sources are rapidly becoming the preferred method of generating energy. Similar to how barrels & storage tanks were to fossil fuels, batteries are fast becoming the go-to method of storing, transporting and utilizing the electric power generated through those renewable energy sources, providing a commendable impetus for the development of battery technologies.

However, batteries possess a number of glaring drawbacks; they are quite expensive to make, have of a relatively short lifespan and are considered hazardous solid waste as they contain several harmful chemicals, making their disposal a daunting challenge for the industries that use them. As the number of expired batteries continues to grow by the tonnage, providing a lucrative growth opportunity for several recycling enterprises, the global battery materials recycling industry share is bound to witness an upsurge. Supported by government regulations and initiatives, the efforts of these enterprises are expected to propel the battery materials recycling market growth in the coming years.

The European Union has been a proponent for environmental protection for a while now and has been actively promoting the adoption of renewable energy sources.

The Commitment: The region’s commitment to protecting the environment is also apparent from the fact that the European Commission has had a piece of EU legislation that is specifically dedicated to batteries, which aims to minimize the adverse effects of batteries & waste batteries on the continent’s environment.

The Opportunity: The sheer scale of the import presents an extremely profitable opportunity for battery recycling enterprises which, with the help of the EU’s environmental & sustainability directive, are expected to majorly fuel the growth of the Europe battery materials recycling market.

Get a Sample Copy of this Report @ https://www.gminsights.com/request-sample/detail/3249

The Asia Pacific is home to a major proportion of the global populace, and not to mention, some of the world’s most rapidly developing economies. The region also houses three of the world’s top ten automotive markets with China leading the foray and Japan & India following close behind.

The Conditions: According to the World Economic Forum, in 2017, China joined Norway, India, France & Britain in announcing their plans to ditch fossil fuel powered vehicles in favor of battery-operated electric vehicles.

In 2017, it was estimated that the decision of these nations to promote electric vehicles would help push the level of lithium-ion battery production to 200 GWh from the initial 30 GWh in the forthcoming years, with China & India being the biggest contributors.

The Numbers: According to the Circular Energy Storage, recycling of lithium-ion batteries is already becoming a crucial source of material for a number of battery manufacturers. In 2018, more than 97,000 tons of Li-ion batteries were recycled – that is more than 50% of batteries that were to reach their expiration.

China is leading the charge as it is home to more than 24 recyclers, out of the total 54 recyclers across the world, that have an existing or planned Li-ion battery recycling capacity.

The Projection: The battery recycling industry is already started to provide traction to second life batteries, which are quickly becoming a highly performing integrated area within the energy storage industry.

Currently, there are more than 43 enterprises that are actively operating in second life activities with Asian enterprises specifically standing out through their vertically-integrated value chains, wherein battery modules designed for electric vehicles could later be deployed across the enterprises’ energy storage divisions. The sheer expansion of the automotive space in the APAC has thus led to a massive requirement for battery recycling, impelling the commercialization scope of the Asia Pacific battery materials recycling industry.

Worldwide, battery materials recycling industry is slated to continue depicting its profitability scale, driven by environmental protection legislations and the second life battery business opportunities across the APAC & Europe. According a research report by Global Market Insights, Inc., the battery materials recycling market size is slated to exceed the $40 billion renumeration mark by 2025.