Polymeric sand market contenders have recently been witness to Wynnchurch Capital acquiring Alliance Designer Products, one of the pivotal manufacturers of polymeric sand and other related installation products. Alliance has been renowned for its superior quality products which pertain reliability and customer satisfaction and Wynnchurch invests in market leaders who have a customer and product centric focus. According to Wynnchurch, the investment should prove to be a profitable one in the future especially due to the growing demand of polymeric sand in the residential, commercial and industrial quarters. 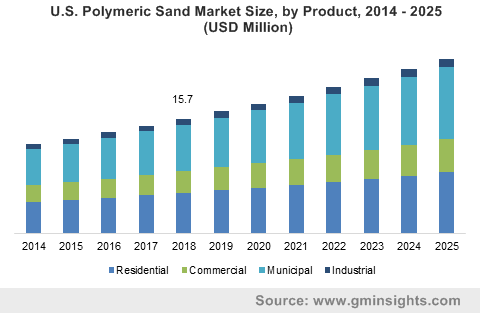 Alliance, currently serving the markets in Canada, U.S. and Europe from Québec, is known for its G2 polymeric sand, its flagship product line that reduces maintenance requirements on hardscape projects and defends against erosion, insects and weeds. Through this deal, the company hopes to further strengthen its stance in the global polymeric sand industry. In a nutshell, the overall polymeric sand market is expected to depict substantial expansion on account of the rising demand of easy to use products that can keep erosion and weeds at bay while catering to an expanding outdoor beautification industry.

Paved outdoor spaces have been gaining impetus not only due to the visual appeal of such landscaping but also due to the minimization of maintenance such outdoor spaces require. A rising trend observed in both residential and commercial buildings has been the addition of paved stone outdoor patio that is rapidly coming to include more than just waterproof furniture and a portable barbeque. In developed nations, where the economy has recovered remarkably in the past few years, the demand for a comfortable and visually pleasing outdoor area that is also an extension of the indoor living space has been observed.

Paved stones exteriors have been one of the most popular choices due to the ease of maintenance and the visual appeal they offer. And this has indirectly been one of the main drivers for the polymeric sand market as stone pavers if not installed properly can become a nuisance to maintain. Polymeric sand is apparently one of the most effective means of keeping weeds and ants out of paved surfaces and has become more popular than concrete due to its flexibility to changing weather..

Get a Sample Copy of this Report @ https://www.gminsights.com/request-sample/detail/3203

Paver stones have become a common feature in public spaces as well due to increasing investment in the beautification and welfare of urban areas by governments around the world. Such a trend has been especially conspicuous in emerging economies where governments are undertaking immense projects to unlock the economic growth prospects. Not only governments but the public-private sector investments are also turning to infrastructure development in emerging economies to bring increased resources to the table and meet the needs of growing populations. Since road and pavements are a major part of the urban landscape, governments are increasing their investment in them, thus opening up a lucrative growth scope for the polymeric sand market.

The current boom in world tourism is also making a significant push for the expansion of the polymeric sand industry as beautification of urban spaces has been at the top of the agenda for authorities looking to attract more tourists. For instance, in a recent facelift, Russia rebuilt more than 300 streets and Moscow’s Garden Ring Road was narrowed to broaden sidewalks with millions of new paving stones. Pavements are necessarily the indicator of prosperity of a country and often the reflection of a city’s civic space and sense.

Paving stones are finding their place in new city architecture as well as renovation of older parts of cities where paving stones were laid down before tarmac became more popular. On these grounds, it would not be incorrect to quote that polymeric sand will also find increased application due to the beneficial aspects of the product that can aid in the restoration of parts of older cities where paving stones are a prominent feature, thus adding impetus to the polymeric sand market.

The rising demand of luxury homes in developed nations and emerging economies pushing to include more streamlined features in their cities will undeniably add a potent boost to the global polymeric sand market. Incidentally, the overall polymeric sand industry has been forecast to surpass a valuation of $85 million by 2025.