Owing to continuous expansion of the automotive industry coupled with the increasing frequency of air-travel, shape memory alloys (SMAs) market has emerged as a lucrative investment avenue worldwide. The properties that have allowed SMAs to foray deep into the aforementioned industries include their ability to remember initial shape, switching from one form to other and back to the original through heating. 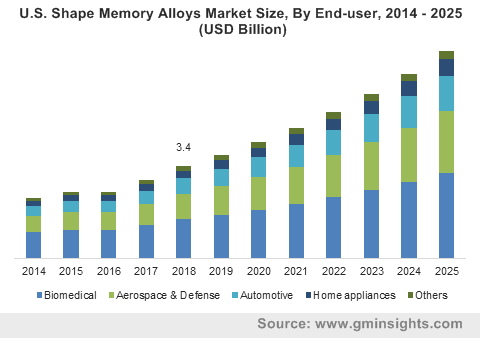 According to the Eureka Network, initially, the biggest hurdle faced by market players when manufacturing SMAs in bulk was their high price, especially in case of Nitinol, an alloy that is a 50-50 mix of nickel and titanium. However, extensive research & development efforts paved the way towards alloys made out of more financially viable raw materials like copper, to make their commercial production significantly more feasible.

Today, as reported by the Copper Development Association, Inc., products made using SMAs have been around for many years, though consumers are often unaware of their presence as they are buried under the product mechanisms. One of the few visible applications of SMAs are indestructible spectacle frames, which could be bent or twisted significantly but still revert to their original form.

Impact of the automotive industry expansion on the SMAs market

Fueled by improving economic conditions, the global automotive industry has been witnessing a surge in terms of sales and volume, specifically from emerging economies such as China and India. With the expansion of the automobile segment, the demand graph of automakers has also surged by several notches. Not to mention, these needs vary significantly from region to region.

Get a Sample Copy of this Report:@ https://www.gminsights.com/request-sample/detail/3261

The Requirements: A particular demand that is quite common in the automotive industry pertains to the vehicle crash safety and the subsequent repair costs. According to the Population Reference Bureau, road traffic accidents have witnessed a dramatic rise across the world in recent years and the financial impacts of such crashes cannot be disregarded.

The Opportunity: A National Highway Traffic Safety Administration study discovered that U.S. road accidents alone cost over $871 billion on an annual basis. While, passenger safety regulations have been highly successful in reducing the chances of death or injuries, this often comes at the cost of irreparable damage.

The Projection: This shortcoming could be mitigated through the use of SMAs as they could potentially reduce repair costs by a significant margin following a crash, where a vehicle’s body work could spring back to the original design, thus lowering the instances where accidents leave an automobile destroyed. This would thus make the automotive sector a crucial end-user segment for the SMAs market, expected to account for 15% of the overall industry share over 2019-2025.

Impact of the aerospace industry growth on the SMAs market

The Drivers: Given how aircrafts are subjected to a significant amount of stress on a day-to-day basis, it only makes sense that an airplane’s body panels and components be made out of highly durable yet lightweight materials. This provides considerable prospects for the SMAs market to make significant inroads in the global aerospace industry.

The Opportunities: According to Boeing, due to their large strain capabilities and high-energy density, SMAs are becoming particularly more prominent across the aerospace industry. They can be used in aerodynamic surfaces such as positioning flaps, morphing structural shapes, electric motor actuators, replacing conventional hydraulics and Smart Vortex Generator that retract to reduce drag during the flight. These applications are expected to not only benefit the aerospace industry, but also make aircrafts more efficient.

The Priority Application: One of the biggest factors anticipated to drive the growth of the SMAs market in the aviation sector is the ability of these metals to lessen the financial losses airlines face through wildlife collisions on an annual basis. According to the Federal Aviation Administration, airplanes collided with birds over 40 times a day in 2018. Apparently, some collisions cause severe deformity and can essentially ground the aircraft, causing losses of more than $500 million on an annual basis. The benefits of SMAs in overcoming these situations would make the aviation industry an ideal customer base for products.

In a nutshell, the SMAs market’s ability to bridge significant gaps in the aerospace and automotive industries would enable it to draw in substantial revenue in the forthcoming years. As per reliable estimates, SMAs market size would be surpassing annual revenues of over $20 billion by 2025.