With companies increasingly focusing on adopting enhanced packaging materials, cast polypropylene films market has gathered commendable momentum over recent years. The material is widely known for its versatility and is gaining traction across many industries. Owing to the product’s higher impact and tear resistance, better cold temperature performance and heat-sealing properties, cast polypropylene films market statistics have shown quite an increase lately. 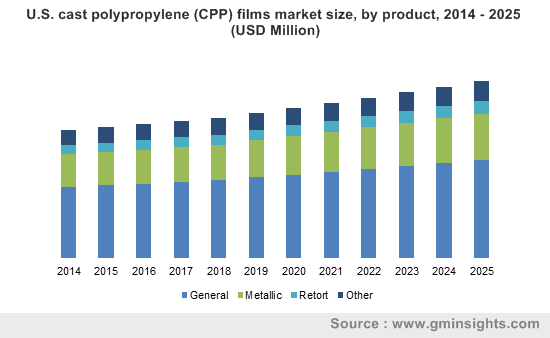 For instance, in 2019, Cosmo Films introduced its new CPP film specifically meant for packaging applications that require high moisture and oxygen barrier and high hot tack properties, enabling packaging machines to run at higher speeds. Additionally, the company has also announced that its new CPP film is expected to contribute to 2-3% of total sales in FY20.

Given below are a list of factors that will be significant while evaluating cast polypropylene films market statistics especially in the F&B industry in the coming years:

1) Compatibility of the product with several food industries and products

In the food packaging industry, there is wide application of CPP films and specific CPP films are indeed developed for niche applications. For instance, pastorizable or sterilizable CPP films are used for dry, confectionery, bakery, fresh and processed food products.

Get a Sample Copy of this Report:@ https://www.gminsights.com/request-sample/detail/1252

Additionally, with growing sales and consumption of snacks and beverages, cast polypropylene film industry statistics will show a considerable rise over the coming years. For example in 2015, snack products registered a substantial increase in sales in the U.S. with a closing total of over US$ 44 billion. Furthermore, snack food item sales are expected to record a CAGR of over 2% from 2016 to 2020, claim reports from Agriculture and Agri-Food Canada.

While the demand for CPP is higher across developed countries like U.S., U.K., Canada and Germany, countries like India and China are increasingly emerging to play leadership roles in Asia Pacific CPP market. Statistics indicate that the Indian food industry is poised for huge growth as is expanding its contribution to world food trade each year. The country’s food sector has emerged as a high-growth and high-profit sector owing to its immense potential for value addition, particularly within the food processing industry.

3) Application in the pharmaceutical & healthcare sector

Due to features that offer enhanced protection against contaminations for longer duration, CPP films increased their foothold in medical and pharmaceutical industries for packaging of clinical products and drugs. Compared to other packaged goods, pharmaceutical items demand better reliability and speedy packaging solutions to deliver product quality, protection and offer tamper evidence, patient comfort and security.

These demands are effectively reflecting on an expanding cast polypropylene films market which is recording impressive statistics due to surging demand and consumption of medical products. Adding authenticity to the fact is a report published by the institute for Health Metrics & Evaluation (IHME), that claims global healthcare spending to most likely surpass $18 trillion by 2040.

With the rising demand of sustainability, CPP industry players are also developing products that adhere to revised sustainability guidelines that makes it easier for food and beverages industry to incorporate CPP films in their products. With growing demands, the global cast polypropylene (CPP) films market is expected to exceed USD 1.77 billion by 2025.