With numerous clinical studies linking air pollution with the prevalence of sinusitis worldwide, the growth graph of sinus dilation devices market has quite overtly depicted an upsurge, given the increasing proportion of air pollution globally. Sinusitis affects a significant number of the global population, in fact, a National Health Interview Survey conducted by the United States Center of Disease Control and Prevention in 2017 estimated that more than 30.8 million individuals were diagnosed with sinusitis in the U.S. alone. Moreover, with comorbid diseases, lifestyle changes as well as other environmental factors further increasing the prevalence of sinusitis, it comes as no surprise that the sinus dilation devices market is projected to experience an exponential surge in product sales in coming years. 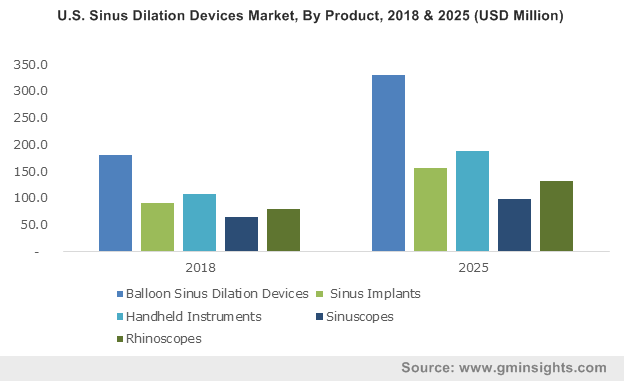 As the elderly population is more susceptible to a varied number of chronic diseases such as chronic sinusitis attributing to the several structural & functional changes they undergo with age, the increasing proportion of the geriatric population worldwide is slated to be one of the biggest contributors to the growth of the sinus dilation devices industry over the coming years. The fact that the world is experiencing a rapid rise in its ageing population is expected to further advance the growth of the industry.

The United Nations in a survey conducted in 2017 found that there are approximately 962 million individuals across the world above the age of 60, accounting for over 13% of the global population. Estimates in fact suggest that the number would be reaching the 2.1 billion mark by year 2050, thereby ensuring a vast reserve of potential patients that would fuel the growth of sinus dilation devices industry.

Get a Sample Copy of this Report:@ https://www.gminsights.com/request-sample/detail/2749

Unlike the conventional sinus surgery, Balloon Sinuplasty, performed using balloon sinus dilation devices eliminates the need for surgeons to cut or remove tissue or bone from the patients nasal cavity to alleviate the inflamed sinus. The minimal invasiveness along with the significantly reduced recovery time of the procedure has become its biggest selling point as it makes the treatment less arduous for the patient, thereby making the procedure one of the most preferred options among sinusitis patients.

Attributed to the robust popularity of the procedure, balloon products accounted for over 33% of the sinus dilation devices market share in 2018. The segment is further slated to experience an exponentially rising CAGR over the forthcoming years owing to industry players’ increased focus on product differentiation in an effort to make the sinus dilation procedure more accurate.

It has now become rather commonplace that the increased levels of air pollution across urban areas throughout the world have wreaked havoc on the overall health of the people residing in pollution-gripped metropolitan cities. The substantially high levels of harmful chemicals in developed regions have catapulted the cases of a number of respiratory disorders with maxillary sinusitis being one of the most notable of the bunch. General unawareness as well as lack of adequate air pollution regulation have been listed as the biggest drivers behind the growth of maxillary sinusitis cases across the world.

A recent clinical study by Johns Hopkins Medicine, where two sets of 19 mice were kept in two different environments, one with filtered air & one with polluted air showed that the subjects in the polluted environment showed elevated levels of neutrophils & eosinophils in their systems, similar to chronic sinusitis patients from different Asian nations that are suffering from severe air pollution. This link has opened up a massive market for the overall industry, substantially propelling the growth rate of the sinus dilation devices market over 2019-2025.

The trends briefly listed out above signify that the overall sinus dilation devices market is projected to attract significant amount of growth over the coming years. In fact, a research report from Global Market Insights, Inc., estimates that the market valuation of sinus dilation devices is slated to exceed more than $3 billion by 2025.