The escalating efforts to promote passenger safety owing to rising number of road accidents will drive automotive seat belts market trends. For decades, seat belts have been one of the most effective safety precautions used in the automotive industry. In fact, a National Highway Traffic Safety Administration (NHTSA) study claims that, between 1960 and 2012, seat belts have helped save more than 329,715 lives compared to all other vehicle safety technologies including airbags, electronic stability control and energy-absorbing steering. 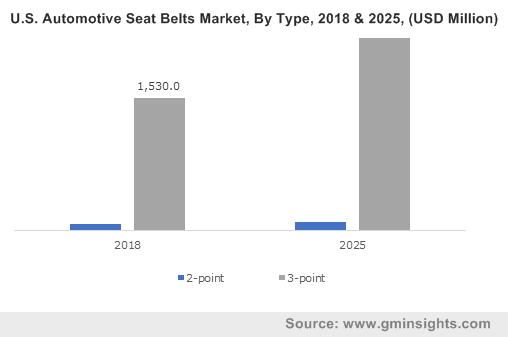 However, despite potential benefits, passengers are still seen avoiding the use of seat belts which has indirectly led to increasing trends in road accidents. For instance, in 2009, road crashes were reported to kill over 33,000 people and injure another 2.2 million, in which about 53% of drivers and passengers were seen not wearing seat belts. Fatalities caused by drowsy driving have also increased dramatically in the past couple of years.

Meanwhile, unbuckled passengers are reported to be more likely of being ejected through the front, rear or side windows, resulting in fatal repercussion. Factors such as these have underlined the sheer importance of seat belts in the current automotive industry and indirectly added impetus to automotive seat belts industry outlook.

Reportedly, to avoid such accidents in the first place, automakers are implementing enhanced seat belt reminder systems in their vehicles that continuously alert drivers and passengers to use seat belts following vehicle startup. Studies also suggest that lap/shoulder seat belts could significantly reduce the risk of fatal injury to front-seat occupants by 45% and the risk of moderate-to-critical injury by 50%.

Get a Sample Copy of this Report:@ https://www.gminsights.com/request-sample/detail/1944

Additionally, primary seat belt enforcement laws and heavy penalties for seat belt law violation are also likely to supplement automotive seat belts market growth. For instance, based on reliable reports, penalty amounts have increased on an average from $39 to $70 in the U.S. while seat belt use has increased by an average of about 9.1% in the country. In addition to stern fines, in 2019, officials in New York have also pushed a bill mandating the use of seat belt in rear passenger seats, cite news reports.

Advancements in seat belt technology coupled with growing investments by OEMs to develop advanced sensor-based seat belts will drive automotive seat belts market growth. Technologies like seat belt tensioners and load limiters have significantly helped improve the seat belt effectiveness whilst lowering impact on travelling passengers. Seat belt reminder (SBR) systems that come with audiovisual aids have also proven to be extremely effective in increasing product traction. In fact, a declining trend in unbelted driving has been recorded while unbelted drivers have reduced by 80% in vehicles with advanced SBR systems.

Meanwhile, automakers are seen promoting the use of seat belts by means of new safety features in last couple of years. For instance, U.S. automaker Chevrolet has recently introduced its ‘Buckle to Drive’ feature, anticipated to come as standard on all 2020 Chevy Traverse, Malibu, and Colorado vehicles, that will actively help prevent teens from driving until they fasten their seat belts. Initiatives such as these are anticipated to foster product use, in turn boosting the automotive seat belts industry size.

Rising cases of road fatalities and surging passenger vehicle sales are expected to foster APAC automotive seat belts market growth. According to reliable reports, in India, a whopping 75% of passenger vehicle drivers do not use seat belts, causing around 15 deaths per day. While the Ministry of Road Transport and Highway report cite that, in 2016, a total of 5,638 people died on road due to non-usage of seat belts. With stringent government regulation and introduction of advanced seat belt reminding technologies, the regional automotive seat belts industry is slated to record significant growth over the forecast period.

Meanwhile, surging passenger vehicle sales in the country will raise the automotive seat belts market growth to new levels. For instance, according to the Society of Indian Automobile Manufacturers (SIAM), the sale of passenger vehicles (PV) rose by 2.70% in April-March 2019 whereas PV sales are projected to grow by 3-5% in FY20. Furthermore, introduction of new vehicle segments equipped with advanced safety features will boost product penetration.

The demand for automotive seat belts is gaining momentum due to rising awareness regarding passenger safety along with new government regulations to minimize road fatalities. The development of advanced seat belt reminding technologies will propel market share. Reports from Global Market Insights, Inc., suggest that the automotive seat belts market size might surpass USD 10 billion by 2025.