Pegged at a modest $2.5 billion in 2017, global aircraft lightening protection market is projected to witness rapid growth over 2018-2024. Robust advancements in aircraft design coupled with the increasing need of conducting maintenance operations for aircraft fleet to comply with modern safety standards have been major factors driving the growth prospects of this industry. The last recorded fatal incident where a lightning strike caused a serious accident was in 1967, when a lightning bolt caused the airplane fuel tank to explode. Since then, numerous protection techniques have been developed and implemented with airplanes now going through a series of rigorous certification tests that verify safety measures. These safety certifications are not only perpetually fueling the aircraft lightning protection market but are also responsible for boosting the research and development efforts in the recent times. 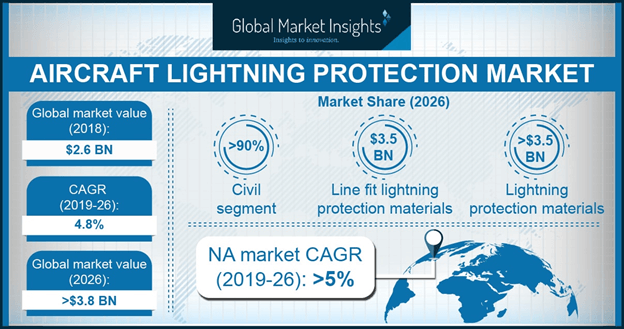 In order to cut down the excess weight and fuel consumption, aircraft manufacturers have been incorporating composite materials in the structural parts of the airplanes. One of the prominent examples of this trend is the Juno project by Haydale which recently developed the world’s first Graphene Skinned Plane that provides significantly improved lightning-strike protection while cutting down on aircraft weight. Reportedly, the electrical conductivity of these composites has been improved significantly for lightning-strike protection by incorporating functionalized nanoparticles into epoxy resins. In addition to the development of such high-grade airplanes, numerous industry heavyweights such as Airbus have kickstarted their own research and development initiatives which will propel the aircraft lightning protection market trends in the years ahead.

Get a Sample Copy of this Report:@ https://www.gminsights.com/request-sample/detail/2822

The civil aviation industry apportions a major chunk of the global aircraft lightning protection market – around $2 billion according to a 2017 estimate. The market size is projected to rapidly increase over the forecast period owing to growing world-trade and increase in passenger traffic. As per an IATA (International Air Transport Association) forecast, the air passenger traffic is set to reach 7.8 billion by 2036. Moreover, the association also estimates that around $17.5 billion worth of goods travel by air every day which translates to about 35% of the total world trade.

Apparently, these growing numbers in terms of air passenger traffic and world trade by air have consistently generated lucrative opportunities for aircraft manufacturers like Boeing and Airbus which have been manufacturing more aircrafts in the recent past. As per reliable estimates, the combined revenue of Boeing and Airbus stood at approximately $164.3 billion in 2016 which highlights the swift expansion of the civil aviation industry size. Needless to mention, the aircraft lightning protection market is certain to benefit from the rising prominence of the civil aviation sector over the forecast timeframe.

Of late, the military segment of aircraft lightning protection market has witnessed a robust expansion owing to increasing defense expenditure of major nations around the globe. According to reliable estimates, the top eight economies of the world allocated a combined $1188 billion to their defense budgets in 2017. Out of these nations, the U.S. alone is estimated to have spent around $610 billion. Apparently, these humongous numbers underscore the significance of military segment in the growth of aircraft lightning protection industry.

Moreover, the retrofit aircraft lightning protection market is projected to get a massive boost as aircraft manufacturers are being offered with sizeable overhaul and maintenance contracts by prominent military forces. For instance, the Marine Corps has already started offering contracts for portable lightning rods as it was recently discovered that the F-35B variant of U.S. Air Force’s flagship stealth fighter – F-35 Joint Strike Fighter is incapable of handling lightning strikes.

Essentially driven by growing world-trade, escalating air traffic passenger figures, and a drastic increase in defense budgets of various countries, the growth prospects of the aircraft lightening protection market appear to be highly promising. In fact, according to the research report put together by Global Market Insights, Inc., the remuneration scale of aircraft lightning protection market is projected to surpass $3.5 billion by 2024.