America SLI battery market trends set to be characterized by overseas expansion by battery makers, U.S. to be a chief growth avenue

Owing to the ever-expanding automotive sector coupled with easier availability of lead-acid batteries, the America SLI battery market share has been growing at an exceptional pace in the last few years. The technological enhancements being made in terms of product design and development has prompted the regional governments to unveil favorable policies pertaining to automotive sector. This has invariably helped the America SLI battery industry participants to focus on the refining the EFB, AGM, and flooded SLI battery technology to gain competitive advantage and fulfill the varying demands of the automotive sector. 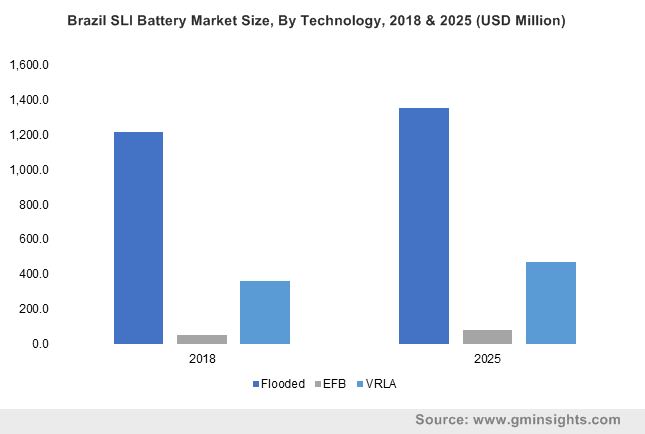 U.S. to be the major contributor toward strengthening the growth potential of America SLI battery industry

One of the most prominent countries to have secured a leading position in terms of research and development pertaining to SLI batteries is the United States. Governmental initiatives involving industry participants to enhance the automotive SLI battery technology has been a pivotal factor that has benefited the U.S. SLI battery market in the recent times. This particular trend can be affirmed by the recently signed agreement between the U.S. Department of Energy’s Argonne National Laboratory and 14 members of the Advanced Lead Acid Battery Consortium. The agreement aims to overhaul the lead-acid battery technology and transform it into the next generation of advanced batteries.

Specifically, the collaboration would use advanced X-ray technology to see if the participants can improve the potential of lead-acid batteries like SLI. In this regard, it has to be noted that lead-acid batteries are well-established in both industrial and automotive settings in the last few decades. However, they have fallen behind rival technologies such as lithium-ion batteries which have secured about 90 percent of the global battery market for utility energy storage.

In the light of such circumstances, the collaboration between the U.S. Department of Energy and the prominent 14-member battery manufacturers consortium appears significant as it would work to make the lead acid batteries more appealing to the power grid and improve the automotive SLI battery technology.

Get a Sample Copy of this Report:@ https://www.gminsights.com/request-sample/detail/3260

Apart from research programs and governmental support, it is quite prudent to mention that the surge in investments toward automobile production coupled with robust battery recycling infrastructure across the nation has undoubtedly assisted the U.S. SLI battery industry to accelerate the pace of product penetration in the last few years. This momentum is likely to sustain in the forthcoming years as has been noted in the research report put together by Global Market Insights, Inc., which predicts that the U.S. SLI battery industry would register an annual growth rate of more than 1 percent over 2019-2025.

With the presence of globally renowned battery manufacturers such as Crown Battery, Trojan Battery Company, Johnson Controls, Exide Technologies, Continental Battery, Power Sonic Corporation, and many others, the competitive spectrum of America SLI battery industry is quite saturated. Apparently, these companies have now turned their attention toward developing countries to gain competitive edge and expand their business overseas.

For instance, the US-based Johnson Controls unveiled a strategic investment plan in 2015 which aims to expand AGM SLI battery production capacity in China, Germany, and the U.S. as well. Since 2011, the company has invested USD 112 million in Europe to increase manufacturing of AGM batteries and its flagship Johnson Controls SLI battery units. It invested a similar amount to expand its Zwickau plant and is now planning to pour in USD 200 million to construct a new automotive battery manufacturing plant in Shenyang, China. Reportedly, the proposed plant would manufacture 6 million proprietary Johnson Controls SLI battery models each year.

Apart from overseas expansion, the major battery manufacturers are further focusing on improving automotive battery technology by partnering with regional players. Needless to mention, with improved product design and production technologies, the America SLI battery market is set to unveil a new range of batteries that would be more durable and corrosion-resistant than ever before. This would certainly augment the revenue share of America SLI battery industry which is, as per reliable estimates, slated to surpass USD 16 billion by 2025.