The global solar PV glass market is gaining remarkable momentum with escalating investments toward boosting energy efficient technology and conserving the energy mix. Favorable government initiatives and projects toward the usage of clean energy sources to reduce carbon footprints have brought about huge growth prospects for solar PV glass industry over the coming seven years. In 2016, global Solar PV glass market was worth over USD 2 billion and the overall consumption is projected to cross 700 million square meters by 2024, according to a report by Global Market Insights, Inc. 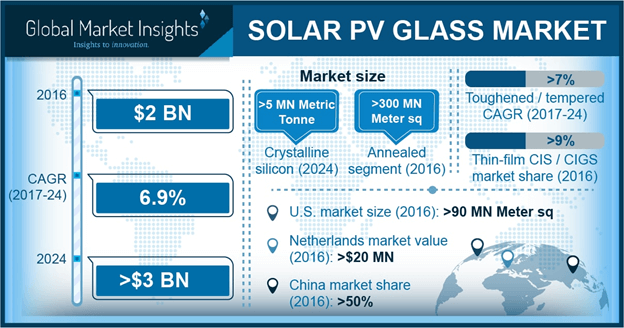 The photovoltaic glass is widely used to concentrate sunlight and convert the solar energy into electric energy. Using solar PV cells and glass in building facades and roof lighting systems can result into economical use of solar energy. PV glass can thus be directly used for power generation for small scale sectors. In countries such as the U.S., the government has introduced rebates and subsidies for the installation of solar PV glass. It has also initiated policies such as Investment Tax Credit (ITC), which has significantly reduced the overall cost of the product to boost its adoption. As per a report by EIA, the U.S. boasted of a total installation of over 12.6 GW of solar PV systems in 2016, chiefly for the residential sector.

Get a Sample Copy of this Report @ https://www.gminsights.com/request-sample/detail/1271

China is a major consumer, producer, and exporter of photovoltaic systems and accounted for more than 50% of the overall solar PV glass market in 2016. In December 2016, the Chinese government amended its Thirteenth Five Year Plan to improve the countries photovoltaic energy sector with an aim to achieve at least 23% of efficiency in large scale production of crystalline silicon photovoltaic cells by 2020.

On the technology front, solar PV glass market is segmented into two types namely float and pattern. The pattern solar PV glass market share is expected to depict an annual growth rate of 6% over the period of 2017-2024, owing to its better aesthetics, easy lamination, non-blinding effect, and desired degree of transparency. On other hand, the float solar PV glass industry also holds a significant market chunk as it finds extensive applications in thin film photovoltaic modules.

Solar PV glass market from thin film CIS / CIGS segment is likely to register a CAGR of 9% over 2017-2024. Moreover, the use of low iron pattern and float glasses for manufacturing crystalline modules has considerably impelled the solar PV glass industry.

The world is heavily treading toward the adoption of renewable energy sources, which will lucratively impel solar PV module market. There has been an increase in public awareness levels regarding the effects of GHG, released into environment after the burning of fossil fuels, which has prompted manufacturers to come up with suitable sustainable alternatives. This initiative will provide a push to solar PV module market growth. Several technological developments and the increasing number of manufacturing facilities has also resulted in reduced product cost, which will fuel the industry trends. According to Global Market Insights, Inc., “Worldwide Solar PV Module Market was valued USD 20 billion in 2016 and will surpass a revenue collection of USD 30 billion by 2024.” 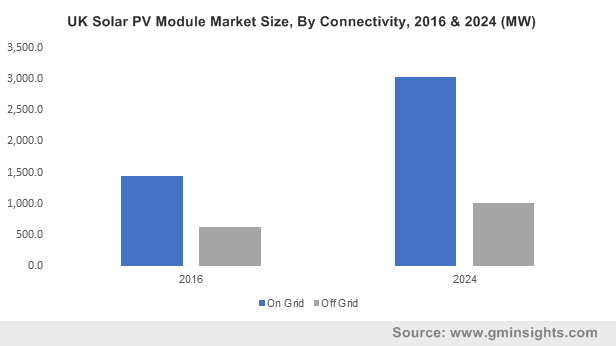 Growing industrialization across the globe will fuel the need of renewable energy. Favorable government initiations in terms of financial support will prompt industry giants to adopt solar PV modules to enhance the growth of Solar Energy Market. Ground mounted systems are being deployed increasingly across the utility and commercial sectors subject to their numerous benefits. The ground mounted segment will exhibit an annual growth rate of more than 7% over the period of 2017 to 2024.

Get a Sample Copy of this Report @ https://www.gminsights.com/request-sample/detail/1563

The governments of various countries have lately been making huge efforts to enhance the grid connectivity of their nations. Speaking of which, the on-grid segment dominated the connectivity landscape of solar PV module industry by accounting for more than 55% of the revenue share in 2016. It is expected to record substantial growth rate over the coming timeframe.

Rural areas have witnessed a heavy deployment of micro-grids to fulfill the escalating need of off grid electricity, subject to which solar PV module market from off grid connectivity segment will generate a significant revenue over the coming seven years. To accomplish the need of sustainable energy, the U.S. has been installing micro grids on a large scale. U.S. solar PV module industry will register a CAGR of more than 6% over the coming years of 2017 to 2024. The attributing factor toward the market growth is deployment of stringent rules and regulations to control GHG emissions along with huge investments in power plants to increase the grid capacity.

To reduce carbon emissions in the environment, the government has been promoting the usage of roof top mounting system. Government support and favorable subsidies will propel solar PV module market from roof top mounting systems. The Asia Development Bank recently granted a subsidy of US 500 million for the development of roof top systems. Escalating installation of these systems across the residential sector will also influence the product demand.

Solar PV module industry from the residential sector collected a revenue of USD 4 billion in 2016 and is predicted grow lucratively over the years ahead. Monocrystalline products are also deployed across this sector, subject to which monocrystalline solar PV module market will grow at an annual growth rate of more than 6% over the period of 2017 to 2024. Additionally, the surging need to maintain energy efficiency will augment the product demand.

Market players are focusing toward strategies such as product innovation and differentiation to gain more profit. The efforts of these companies coupled with government norms to promote clean energy will suitably impel global solar PV module market.

Thin film solar cells market to register a phenomenal CAGR of 16% over 2016-2024, rising demand for sustainable energy will drive the industry growth

With a great deal of interest to improve the quality of solar power system due to fossil fuels rigorously getting drained, thin film solar cells market is speedily evolving with every passing year. Strong concerns regarding global environmental issues has brought a dramatic growth in the clean energy market, with solar energy at the pinnacle. Furthermore, the surging demand for electricity specially from off grid areas along with reducing renewable energy tariff subjected to the increase in competitive bidding will heighten the market demand in the coming timeframe. As per a report by Global Market Insights, Inc., “Global thin film solar cells market is expected to increase its revenue fourfold by surpassing USD 30 billion by 2024, having had a worth of USD 8 billion in 2015.”Technological progressions along with a large number of promising energy conservation programs that have been initiated worldwide have resulted in a decline in overall component cost. These adopted initiations will act as a catalyzer for the overall growth of the market. In this regard, India is already a step ahead. In 2016, the country has launched a target of deploying 20 GW grid connected solar power projects in half a decade, which will finally result in cost reduction of solar power generation of the country. 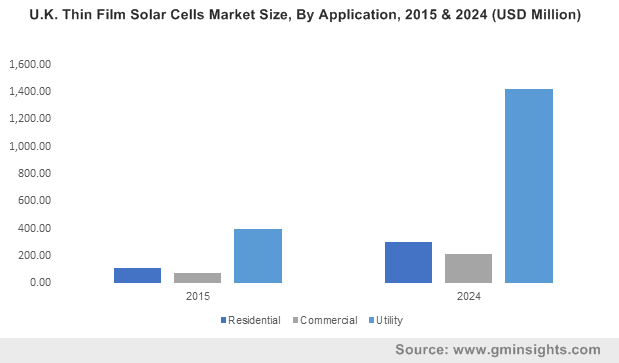 The solar technology is witnessing a continuous evolution with technological progression. Three types of thin film cells that are predominant in the market are cadmium telluride thin film cells, amorphous silicon cells, and copper indium gallium diselenide (CIGD)solar cells. Amorphous silicon thin film solar cells market accounted for more than 13% of the total volume in 2015, and is expected to observe a surge due to increasing demand for solar wristwatches, garden lights, and electronic calculators. Cadmium telluride solar cells are largely adopted for generating terrestrial solar power in residential sector owing to the product’s cost effectiveness and high-level conversion efficiency. This second-generation thin film solar cells industry is estimated to grow stupendously at a CAGR of 17% over the period of 2016-2024.  Copper indium gallium diselenide based film solar cells are the top performing cells till date, with an upper hand due to absorption of more sunlight than the other products. CIGD thin film solar cells market is anticipated to generate a revenue of USD 8 billion by 2024.

Get a Sample Copy of this Report @ https://www.gminsights.com/request-sample/detail/1092

Low toxicity, high efficiency, and comparatively affordable manufacturing cost are the leading factors driving thin film solar cells industry to penetrate a wide array of sectors. Thin film solar cells market is gaining a huge popularity across residential, utility and commercial sectors owing to its flexibility and light weight. Thin film solar cells industry from commercial application have collected a huge revenue of USD 1 billion in 2015, and is anticipated to be one of the prominent sectors driving the application landscape in the coming timeframe. Growing consumer claim for uninterrupted power supply is redirecting the focus toward sustainable and reliable energy sources, which in turn is influencing the market outlook. Driven by the handsome number of government solar projects that are continuously being launched, thin film solar cells market share from utility sector is slated to exceed a power capacity of 60 GW over the coming seven years.

Geographies that are anticipated to influence thin film solar cells market over 2016-2024 are listed below:

Market players are concentrating more on research activities to enhance the product quality along with improving the energy efficiency. However, lack of proper knowhow of the ongoing financial incentives related to non-conventional energy sources may act as a deterrent in the growth path of the industry. Prominent participants of thin film solar cells market include Hankey Asia Ltd., Ascent Technologies Inc., Hankey Asia Ltd., Global Solar, Inc., and First Solar.