Rising demand for real-time rendering has created an expansive growth scope for 3D rendering market which has witnessed increasing investment in recent times. As technology advances and companies become increasingly digitalized, the complexity of the business process will also increase. To address these challenges, organizations are looking for more efficient, faster, and real-time rendering solutions, adding impetus to 3D rendering market trends. 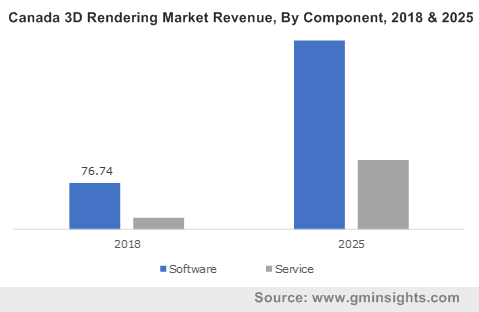 3D rendering is the process of fabricating an image based on 3D data stored within a computer. As the construction and real estate industries are witnessing exponential growth, real-time visualization and use of 3D rendering software have become integral part of the designing process, offering huge efficiencies to architects and engineers.

Architects, engineers and designers use architectural rendering software to transform their ideas into real-time design by exploring multiple options. In architecture, three dimensional images offer architects to review interiors and construction decisions before starting the project. This results in dramatically lowering costs, as expensive changes do not have to be made during the construction stage. Customers also get to view what the building may look like, including its interiors, before investing in it.

The healthcare sector is increasingly adopting advanced technologies, such as 3D medical animation and virtual reality, to create patient-specific surgical replication and personalized 3D printed medical devices. 3D medical modeling helps to understand the functions of body parts, the support of veins to muscles, internal organs and their functions, and its consistent adoption is also likely to fuel 3D rendering industry outlook.

Get a Sample Copy of this Report:@ https://www.gminsights.com/request-sample/detail/3953

3D biomedical image rendering provides a clear view of the complex process of the human body. By gathering data via 3D imaging from patients and integrating it with virtual rendering technologies, doctors are enabled to pre-plan the best approach for surgical intervention. 3D modeling platforms will allow medical scientists to generate high-quality models from complex data sets and integrate scan data with CAD product designs for research purposes and teaching. Deploying 3D rendering services in healthcare will positively impact the 3D rendering market share. As per Global Market Insights, 3D rendering market size from healthcare will grow at a CAGR of 25% over 2019-2025.

The gaming industry is expanding rapidly due to high internet connectivity and growing popularity of virtual reality games to bring immersive experiences to users. A trend has been witnessed where major gaming companies are investing both time and capital to provide their customers with the most absorbing gaming experience. Mounting developments in interactive graphics software, especially in the gaming industry will augment 3D rendering market share.

Asia Pacific 3D rendering market is estimated to grow at a CAGR of over 24% over 2019-2025. Rapidly expanding urbanization and industrialization will play crucial roles in the growth of 3D rendering industry.

Product marketing has been revolutionized by the advent of 3D rendering services. Marketers of hardware products have always been placed in a challenging position when it came to communicating functions, value and differentiators of their product. The challenge has been almost insurmountable for startups due to their tight marketing budgets. However, 3D rendering of products has helped in greater engagement of consumers on limited marketing expenditure. 3D rendering industry is expected to record 23% CAGR over 2019-2025 from product design & modeling segment.

As 3D visualization is becoming a crucial part in various industries including architecture, IT, healthcare, gaming, etc., 3D rendering market is projected to witness exponential growth over the forecast timeline. 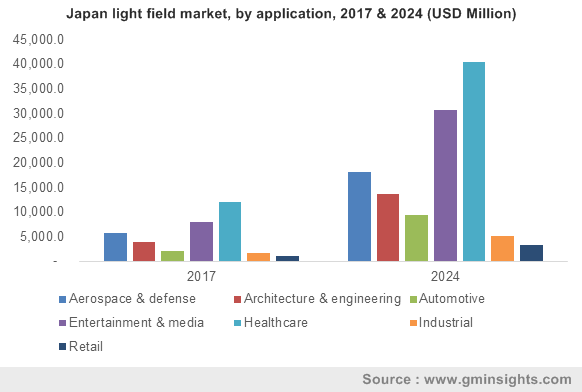 A concise overview of network attached storage market in terms of regional landscape, global share to record a double-digit CAGR over 2018-2024

The commercialization of global network attached storage market has indeed taken up a remarkable pace in the recent years, courtesy – the increasing number of enterprises diving into big data analytics & data mining. The rapid adoption of NAS solutions in home and consumer applications to offer storage that can be accessed by multiple devices have provided significant impetus to the growth statistics of network attached storage industry share. With NAS gaining considerable traction across SMEs and other businesses incorporating cloud-based network, analysts speculate the network attached storage architectural layout to witness a revolution of sorts in the coming years. Not to mention, technology interventions are deemed to remain the focal point of this transition. 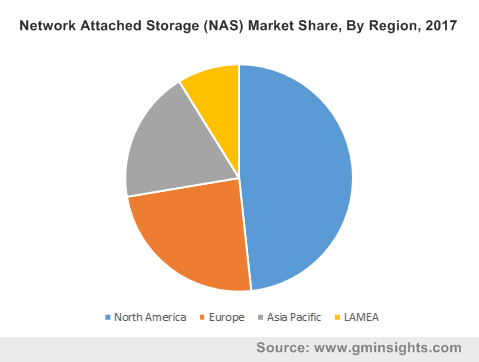 Toshiba, for instance, has recently launched its next-generation 3.5″ NAS N300 HDD and 2.5″ L200 HDD that can be now used in laptops as well. The technology, as claimed by Toshiba works perfectly with any network attached storage devices that are used for personal, home office or small businesses. The NAS device has been designed to support around eight drive bays in a multi-RAID NAS and features rotational vibration sensors that automatically detect & compensate for transient vibrations, thereby delivering prompt performance in multi-bay storage enclosures.

In yet another significant instance, the Taiwanese technology company Synology has recently announced the availability of its “18-series” NAS servers in India. Reportedly, the servers are designed to serve as personal cloud storage with features such as media streaming, data backup, file sharing, photo management, and more. The instance further emphasizes another vital strategy undertaken by NAS market players – exploiting the enormous potential in the untapped economies. The increasing technologically advanced and aware consumer base is one of the chief regions drawing the stakeholders’ attention toward these emerging countries. Speaking along similar lines, the APAC region, as forecast by Global Market Insights, Inc. is slated to register the fastest growth rate over 2018-2024. The rapidly proliferating trends of digitization coupled with the rising demand for cost effective & scalable data storage solutions are overt to further sway the regional industry outlook.

Get a Sample Copy of this Report@ https://www.gminsights.com/request-sample/detail/2570

North America, being a major technological hub stands poised to hold significant share in the global NAS industry. The region moreover retains the presence of large scale enterprises that have adopted the cloud platforms and big data analytics – a factor further expected to garner high demand for NAS solutions in the coming years. The rapid adoption of consumer and home network attached storage systems in U.S. and Canada across various end-use sectors such as the BFSI and IT & Telecom market have significantly driven North America network attached storage industry share. The United States NAS industry share is forecast to record a y-o-y growth rate of 20% over 2018-2024.

Elaborating further on the geographical landscape, Europe is projected to procure second largest share in the NAS industry. The growth is mainly attributed to the rapid adoption of this technology by the SMEs in tandem with the massively growing data center developments in the region. Add to it, the continent, over the recent years, has been one of the top-notch spots for the industry players adopting regional expansion as their chief growth strategy.

All in all, endorsed with a rich competitive and application gamut comprising BFSI, IT & Telecom, healthcare, retail, consumer electronics, etc., the global network attached storage market is certain to become one of the most remunerative business spheres for potential stakeholders. In terms of commercialization, Global Market Insights, Inc., projects network attached storage industry size to surpass USD 20 billion by 2024.