The potential for cyber-physical system to improve operational efficiency in manufacturing processes is humongous. Industrial robotics market proceeds, which has indeed been appreciable in recent years can be majorly credited to this fundamental aspect. It is further imperative to mention that as automation technologies such as robotics, machine learning occupy an increasingly demanding role in industries, their impact on the workplace in terms of safety security, asset tracking, and supply chain has become a point of focus for the research fraternity. In this regard, with the concept of Industry 4.0 (fourth Industrial Revolution) being already set in motion and the influx of technological advancements focusing on maximizing the operational throughput, industrial robotics market demand is bound to witness a marked rise over the ensuing years. According to a recent published report by International Federation Robotics(IFR), globally almost more than 1.4 million industrial robots would be deployed into factories by 2019. As claimed by experts, if the forecast figure of 1.4 million deployment is touched by next year, it would be around 1 million more than that of the record-breaking year of 2015. The aforementioned statistics is quite indicative of the exponential growth curve ahead for industrial robotics market. 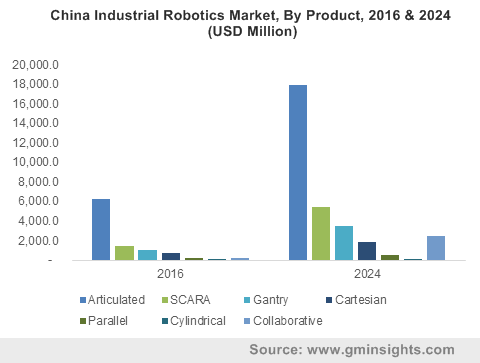 Amidst the dynamically charged intense share battle, Europe currently witnesses a percentage of authority over the regional landscape. Statistics claim 65% of total number of countries deploying more than average number of industrial robots per 10,000 employees belongs to the European Union. The major factor that has augmented Europe industrial robotics market is the region’s persistent investment in robotics projects over the past few years. In the year 2016, the European Union made it to the front page with its co-funding on 17 new robotics projects under Horizon 2020 Framework in a bid to proliferate research and innovation. Reportedly, 16 of these projects stems from robotics work programme, which implement strategy brainstormed by SPARC, the Public-Private Partnership for Robotics in Europe.  Considering these aforementioned axioms, Europe is claimed to procure a major stance in the global industrial robotics industry share landscape, with Germany at the forefront.

Another belt that is emerging to be the next investment hotbed for industrial robotics market is Asia Pacific. The rapid pace of advancements in the regional market can be majorly attributed to governments’ encouraging initiatives toward promoting the adoption of industrial robots. The South Korean Government, for instance, has recently declared its plan of making a significant investment in upgrading the existing robotics and automation systems, in a bid to help the regional automation market to record USD 6 billion by 2022. The Government of Japan has also funded and strategized several plans that prompts Japan based SMEs to incorporate advance manufacturing capabilities in their business model. Citing an example demonstrating the positive influence of these initiatives is Fanuc plant in Japan, which employs only four manual workers per shift to supervise the industrial robots for the entire operation of the plant. For the records, China and India, are also claimed to contribute significantly toward APAC industrial robotics industry share.

Get a Sample Copy of this Report@ https://www.gminsights.com/request-sample/detail/1729

Industrial robotics industry is indeed on its way to way to witness remarkable escalation over the coming years, given the ongoing efforts by the market giants as well as regulatory bodies to unlock the maximum potentialities of automation across manufacturing domain. Yet another factor that has played its cards in proliferating the business outlook is the increasing capital investment in employing manual labors and the related inconvenience associated with it.  Average industrial robot price cost, on the other hand, has witnessed a downturn, with increasing production.

In this regard, one of the trends that remains to be seen in industrial robotics industry is the demand-price relationship for these robots, particularly in the emerging economies. All in all, the profitability scope seems humongous for the industrial robotics market in the coming years, with a target global share of USD 80 billion by 2024.