Asia Pacific construction equipment market to gain momentum from the launch of technologically-advanced machines over 2019-2025, India and China to emerge as prominent growth avenues

Driven by massive spending on infrastructural projects and rising inflow of FDI in the real estate sector, Asia Pacific construction equipment market has established itself as one of the most lucrative business spheres in the recent times. The rise of online retail outlets and the convenience of replacing parts by the firms via online channels has been creating considerable opportunities for the players operating in the Asia Pacific construction equipment market. The overall construction sector in the region is increasingly shifting toward improved and technologically-advanced construction machinery owing to a significant uptick in labor costs and visible demographic changes. 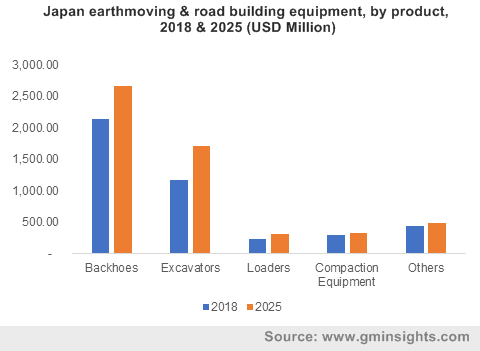 Speaking in the similar context, numerous prominent heavy-equipment makers are developing advanced excavators which has fortified the stance of earthmoving and road building equipment segment in the Asia Pacific construction equipment market. For instance, Hitachi recently introduced ZH210-6 excavator which is regarded as one of the most fuel-efficient and light-weight excavators to have been developed in the recent past. Equipped with high-grade hydraulics, ZH210 emits reduced levels of carbon dioxide and consumes less fuel.

Following its establishment as one of the prominent growth engines of the Asian continent, India has stepped up its efforts to reform the way urbanization has been progressing in the nation over the last few decades. Owing to increasing population and high rate of migration, the demand for affordable housing is on the rise. In addition to this, the need to upgrade the overall transportation network across urban and rural areas has been one of the top-most priorities of the nation.

Get a Sample Copy of this Report @ https://www.gminsights.com/request-sample/detail/3109

To achieve the desired results in terms of sustainable urbanization in this time and age, India has been investing heavily in the construction sector – a business vertical which has emerged as the second largest employer in the nation over the last few years. The construction sector received a humongous boost by the Indian government in 2015 when it launched three mega urban transformation schemes viz., Housing for All, Atal Mission for Rejuvenation and Urban Transformation (AMRUT), and Smart Cities Mission.

These ambitious programs – allocated with a total budgetary outlay of more than 6 lakh crores – are aimed at driving economic growth and fast-tracking the process of urban transformation to enable better living standards, which would, in turn, immensely benefit the commercialization potential of APAC construction equipment market from India.

After constructing large-scale projects such as the world’s largest dam and building a 26-mile-long bridge, China is now focusing on unprecedented infrastructural projects such as Belt and Road Initiative. Regarded as the largest undertaking in its modern history, the initiative aims to develop and build an enormous network of railroads and shipping lanes between China and 65 nations in Europe, the Middle East, North Africa, and Asia.

Although it was first proposed in the year 2013, Belt and Road Initiative has garnered considerable momentum only last year and is expected to provide significant push to the Asia Pacific construction equipment industry. Moreover, China’s is rapidly transitioning toward a consumer and services driven economy which opens up a new kind of construction in social, educational, and healthcare infrastructure.

Powered by the launch of innovative and technologically-superior equipment, swift pace of urbanization, rising demand for affordable housing, and massive spending on infrastructural projects by chief economies of Asia such as India and China, the remuneration portfolio of Asia Pacific construction equipment industry is slated to surpass USD 80 billion by 2025.