Automotive display market to derive commendable proceeds via consistent improvement in OLED display technology over 2019-2025, Europe to emerge as one of the most profitable growth terrains

The fast-paced growth of the automotive sector across the globe has emerged as one of the major factors that have driven the automotive display market trends over the recent years. Although ride sharing is increasingly gaining popularity as a viable mobility option, the demand for conventional vehicles has not only remained consistent but has grown exponentially. In fact, as per reliable estimates, the global sales of passenger cars and trucks surpassed the figure of an overwhelming 90 million units for the very first time in the year 2017. These numbers apparently explain the rapidly expanding automotive display market share, which is projected to surpass a remuneration portfolio of USD 30 billion by 2025. 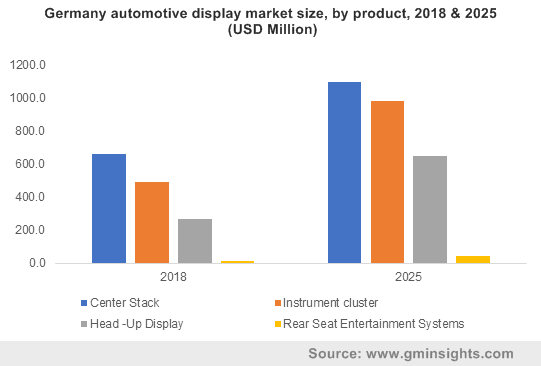 Primarily, the usage of various display technologies in the automobiles is experiencing evolutionary changes as new functionalities and designs are being created and integrated within the car systems by major automakers. The need to have high-performance interactive displays – equipped with seamless response to touch and visual stimulus – has become a crucial characteristic for all the automakers operating at an international scale. Apparently, buttons are gradually disappearing in favor of multi-functional touchscreens. Notably, the incorporation of OLED display technology has helped automakers to develop virtual dashboards with curved screens.

Elaborating further on the evolution of OLED display technology and its current form, it would be prudent to mention the fact that OLED displays are now termed as the most preferred display panels among prominent automotive firms such as Mercedes-Benz, Volkswagen, Toyota, Audi, and General Motors. Following are a few instances which underscore the growing prominence of the OLED displays in the auto industry and the way it is affecting the overall automotive display technology landscape:

Get a Sample Copy of this Report:@ https://www.gminsights.com/request-sample/detail/3192

The consistent improvement in OLED display technology is quite evident from the aforementioned product launches and offers a glimpse into the rapidly expanding automotive display market share. Additionally, better picture quality, visibility, and sharpness than the TFT LCD monitors have been the USPs of OLED display panels owing to which the automotive display market is rapidly expanding its consumer base across various business verticals.

Owing to the presence of numerous luxury automobile manufacturers along the likes of Jaguar Land Rover, BMW, Porsche, Audi, and Mercedes-Benz, the Europe automotive display industry has been a significant hub for developing and refining the existing automotive display technology. Most of these luxury automotive brands are offering large rear seat entertainment systems and integrated displays to enhance the driving experience. Moreover, the increasing demand for expensive ADAS systems to ensure more comfort, safety, and convenience has been instrumental in uptake of automotive displays in the European countries.

Considering the progress being made in developing advanced OLED display technology and the incorporation of newer technologies in the automotive display market, it can certainly be stated that the cars of the future would be equipped with highly-customized display systems which would fulfill the requirements of efficient navigation, entertainment, and safety.