Unveiling automotive LiDAR market outlook in terms of the vehicular spectrum, global industry to depict a phenomenal CAGR of 40% over 2018-2024

The global automotive LiDAR market – a rapidly growing vertical of the automotive sector, has been strongly consolidating its stance in its parent industry since the last half a decade or so. This business space, valued at over $150 million in 2017, has been depicting commendable growth particularly on account of the fact that sensor technology has become the primary methodology for many automatic and semi-automatic vehicles to sense their surroundings. Back in the day, LiDAR was majorly used in aerospace, military, meteorological and robotics sectors, however, with the advent of artificial intelligence which has made assisted driving a reality, the commercialization scope of automotive LiDAR market has been on an incline. 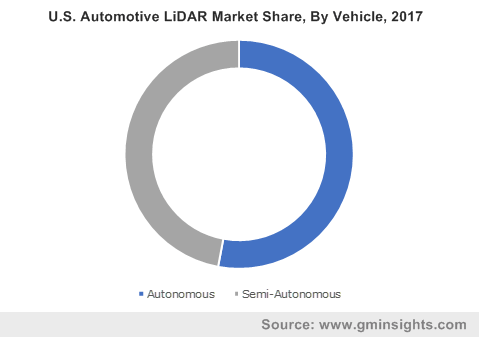 The expansion of the global automotive market is expected to further propel automotive LiDAR market growth as automakers across the world continue to invest in research and development activities to develop and incorporate semi-autonomous and autonomous vehicles in their respective product portfolios.

Autonomous vehicles – which are capable of operating themselves without any help or interaction with humans, are rapidly becoming a reality. Unprecedented advancements are being witnessed herein – courtesy, renowned technology companies and automobile manufacturers racing to capitalize on the lucrative opportunities offered by autonomous technology. According to a 2018 report by Bloomberg, Waymo – a self-driving car initiative by Alphabet Inc., Google’s parent company, is leading this race , leaving its nearest competitors in the lurch. The firm has already signed a deal with Chrysler to purchase thousands of their Pacifica minivans which would be retrofitted with Waymo’s LiDAR sensors.

Automotive LiDAR market has also tastes success on account of the fact that other players such as General Motors Co. have been making inroads in this vertical. GM has been intending to deploy a ride-hailing service using an autonomous version of its Chevrolet Bolt – a version that won’t have a steering wheel or pedals – by the end of 2019. To that end, GM has also received a $2.25 billion support form SoftBank Vision Fund. Driven by the significant efforts undertaken by automakers such as Alphabet and GM, the overall automotive LiDAR market size from autonomous vehicles is projected to grow at a CAGR of 35% over 2018-2024.

Get a Sample Copy of this Report:@ https://www.gminsights.com/request-sample/detail/2911

Unlike the autonomous vehicle segment, which is currently in its infancy, semi-automated vehicles are relatively well established. Indeed, according  industry with the segment holding over 40% of stake in the automotive LiDAR market according to a 2017 estimate. A plethora of renowned automobile manufacturers have already incorporated driver-assist features in several of their vehicles. In case of these vehicles, LiDAR are deployed to enhance a driver’s capabilities by constantly assisting in the vehicle operating activities. Vehicles that incorporate a LiDAR-based driver assist system also provide collision detection and avoidance capabilities. In addition, the integration of LiDAR helps drivers merge into the traffic and change or keep the vehicle in a lane. These features have become so commonplace that many vehicle manufacturers now provide it as an add-on option on their vehicles. Automakers are even developing their own software suits to allow drivers to interact with the driver-assist system.

Powered by the rising efforts undertaken by prominent automobile manufactures to exploit LiDAR in partially connected vehicles, semi-autonomous vehicles held close to 40% of the automotive LiDAR market share in 2017 and is expected to expand remarkably in the years to come.

It is prudent to mention that autonomous LiDAR market will continue to witness constant advancements in the sensor technologies as core companies work towards developing sharper and more robust sensors. Major vehicle manufacturers are even acquiring and incorporating newer LiDAR sensors to enhance the capabilities of their respective self-driving vehicles. According to a 2018 report, Volvo and Toyota both have already signed partnership deals with a LiDAR startup named Luminar to purchase their LiDAR units to help their cars “see” better.

Attributing to such advancements, the revenue graph of autonomous LiDAR market will continue to depict an exponential growth. The demand for LiDAR in myriad vehicles is projected to turn the global automotive LiDAR market into a $3-billion-dollar industry by 2024, claims a report by Global Market Insights, Inc.