The commercialization scale of biosensors market has been commendable since the development of the first oxygen biosensor by Lel and Clark back in 1962. The remarkable penetration of this industry has been witnessed profoundly in the medical space. With the advent of tissue engineering, nanotechnology, and regenerative medicine, the application portfolio of biosensors industry has expanded by multiple folds in the medical sector. 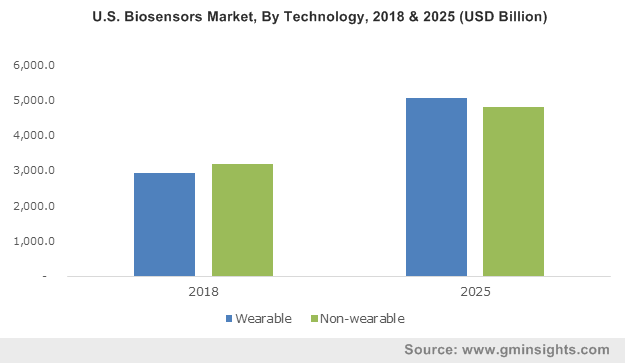 It is rather overt that the transformation biosensors industry statistics has been brought about on account of the wide spectrum of biosensor applications in the field of medicine, essentially comprising cholesterol monitoring, blood gas analysis, blood glucose testing, drug discovery, and pregnancy testing.

Among the aforementioned, blood glucose testing emerged as the dominant medical application segment in 2018, with a 71% share in biosensors market, driven by the widespread prevalence of diabetes worldwide. As per International Diabetes Federation statistics, the diabetic population is estimated to reach 552 million in 2030 which is a rather drastic increase from 366 million in 2011.

Diabetes management is becoming a potentially lucrative vertical all by itself, a fact that is certain to augment biosensors industry statistics from blood glucose testing applications. The urgent requirement of addressing sugar control has also been recognized by medical companies, on the grounds of which they have been attempting to manufacture highly advanced devices to combat diabetes.

Recently, the U.S. Food and Drug Administration approved the Eversense Continuous Glucose Monitoring system that can be used in patients above 18 years of age, afflicted with diabetes. Incidentally, this is the first FDA-approved CGM system that incorporates a fully implantable sensor for glucose detection.

Get a Sample Copy of this Report:@ https://www.gminsights.com/request-sample/detail/747

Powered by the efforts of medical device manufacturers and the integration of advanced technology in glucose measuring systems, blood glucose testing will continue to exert its dominance in biosensors market over 2019-2025.

With the growing popularity of portable, affordable, and user-friendly devices, biosensors market is witnessing a plethora of opportunities in the point of care (PoC) testing industry. The healthcare marketplace, since long, has been vocal about the necessity of efficient devices to deliver sensitive results for early disease detection and subsequently, reduced mortality rate.

Scientists have been developing various medical biosensors, specifically POC biosensors, given that they conveniently enable selective, rapid, and sensitive detection of diseases and are still relatively cost-effective.

One of the most pivotal factors responsible for augmenting biosensor market statistics from the POCT sector is the technological advancements incorporated in biosensor devices used in hospitals. The efficiency of these sensors has a marked impact on surgical procedures leading to an increased demand for these devices in the PoC testing domain.

Being at the forefront pertaining to technological advancements, U.S. led the regional biosensors industry in 2018, accounting for 81.0% of North America share. Besides technological developments, the increasing prevalence of chronic ailments coupled with the heavy R&D investments and a favorable regulatory scenario are the other pivotal factors driving the regional biosensors industry share.

The extensive deployment of these sensors in the domains of environmental testing, drug discovery, and more in tandem with massive R&D programs are also responsible for transforming U.S. biosensors industry statistics.

The government initiatives are certain to play a significant role in the overall expansion of the biosensors market. The recent developments in the field of proteomics and genomics are likely to offer a huge set of opportunities to the overall industry. The technological intervention in this space is also providing a significant impetus to the biosensors market. Major IT companies such as IBM, TCS, and Infosys are heavily investing in this space to explore the untapped prospects.

Some of the major biosensors industry players are Abbott Laboratories, Bayer Healthcare, Ercon Inc., EG & G IC Sensors, Strategic Diagnostics, Lifescan, Inc. Johnson & Johnson, and Sysmex Corporation. Pricing is one of the major parameters defining the hierarchy of these participants on the competitive scale. The industry is characterized by heavy R&D investments for the development of highly-efficient and compact biosensors, which are in sync with the robust technology advancements in this space.

Analyzing the current scenario and the fast-paced penetration of biosensors across myriad sectors, this industry is certain to witness a phenomenal growth trajectory over the years to come. Global Market Insights, Inc., forecasts biosensors market statistics to be pegged at over 31.5 billion by 2025.