Chitosan market to register a double-digit CAGR over 2018-2024, surging demand from wastewater treatment to expedite the industry expansion

In a world consumed with the concern of reducing waste and bring down greenhouse gases emission, chitosan market has gained major prominence in the last couple of decades since the compound has proven to be one of the most ecofriendly biopolymers. Recently a group of bioengineers from University of Nottingham in UK have joined a counterpart team in Nile University, Egypt to develop a substitute for conventional plastic carry bags using chitosan. The biodegradable alternative will be designed to be greener than more conventional polythene derived from fossil fuels and can also be used to extend the shelf life of foodstuffs. 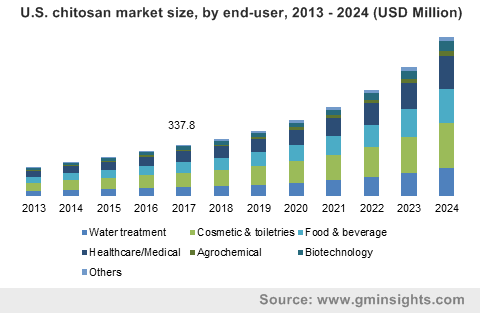 Apparently, developing nations like Egypt have a major problem when it comes to disposal of plastic bags and reduction of water contamination. The use of bioplastics is not feasible in the African nation where most plants are grown for food and cotton. Chitosan, the man-made polymer derived shrimp shell, has emerged as viable solution for the production of a biopolymer nanocomposite material that can replace polyethene. The success of chitosan in Egypt can lead to British manufacturers opting for it as well which is eventually expected to lend a major boost to the chitosan market over 2018-2024.

Chitosan is already a very recognized material in waste water treatment industry as well as food packaging industry. Research has demonstrated that the biopolymer chitosan can be used as a coagulating agent for organic compounds, toxic heavy metals and for adsorption of dyes and minor concentrations of phenols in various industrial wastewaters. Absorption in waste water treatment has been attracting scientific focus as it is a high efficiency, low cost method and absorbents are easily available. Driven by industrialization and urbanization, water pollution has become a major threat on Planet Earth. Chitosan industry has forged a remarkable growth avenue for itself as it has proved to be one of the most effective compounds for the removal of heavy metals or metalloids through adsorption.

Get a Sample Copy of this Report @ https://www.gminsights.com/request-sample/detail/760

Chitosan market has also etched out a growth path through the development of edible alternatives in food packaging. Researchers are therefore developing packaging alternatives made of chitosan as an option that has the potential to replace plastic in the food and animal feed industries. As per the Australian Marine Debris Initiative Database, plastics constitute one of the biggest pollutants in the Australian waterways, with up to 130,000 tones winding up in the ocean each year. Researchers at the National University of Singapore have succeeded in developing an ecofriendly food packaging material that is chemical additives free by fortifying natural chitosan composite film with seed extract from grapefruit. This innovative food packaging material can impede fungal growth resulting in doubling the shelf life of perishable food. As such packaging options come to achieve mainstream acceptance, chitosan market is bound to register a growth influx over the ensuing years.

The production procedure for chitin and chitosan involves use of hydrogen peroxide and high temperatures besides the use of aggressive agents, concentrated solutions of acids and sodium hydroxide. Large volumes of industrial wastewater containing acid and alkali are produced during the chemical treatment of chitin and chitosan. However, the compounds are used across a wide array of industries that include medicine, agriculture, cosmetics and food processing. Considering such applications and the relative eco friendliness of chitosan, extensive research and development is being conducted in the chitosan market to create a product that is not as harmful to the environment.

Recently a research endeavor has succeeded in obtaining low-molecular-weight, water-soluble chitin and chitosan that relies on electron-beam plasma degradation of chitosan in a specialized plasma chemical reactor. The new technique not only has the advantage of being environmentally friendly but also reduces the time needed to produce water-soluble chitosan from several days to minutes. As more investments related to chitosan find their niche in R&D programs, it is imperative that the chitosan market will register a massive growth rate over 2018-2024.

Ionic liquids market is generating a heavy momentum in the chemical industry space, owing to the growing concerns over VOCs and other toxicity emissions from organic solvents. Driven by the regulatory pressure and the growing awareness regarding environmental issues, green solvents are being extensively used for wide range applications which include paints and coatings, adhesives, pharmaceuticals, printing inks, and even in cosmetics. Better environmental portfolio characterized by low viscosity, superior thermal stability, non-combustibility, and negligible vapor pressure gives ionic liquids industry a competitive advantage over organic solvents. Some of the liquids such as imidazolium, pyrrolidinium, ammonium, piperidinium experience high market demand owing to their tremendous production flexibility. Concurrently, favorable programs initiated worldwide by bodies such as REACH, EPA to curb environmental emissions is expected to complement the market dynamics. A report by Global Market Insights, Inc. estimated that Global ionic liquids market will exceed a revenue of USD 2 billion by 2022. 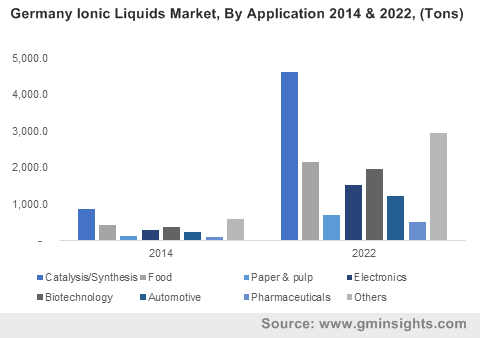 China is projected to be the major hub for ionic liquids industry in the coming five years. Records depict that China accounted for 17% of the overall ionic liquids industry share in 2014. An appreciable shift in consumer preference for green solvents over conventional organic solvents to mitigate the global environmental concerns is fueling the regional market demand. With a strong target of reducing the pollution level within next few years, China ionic liquids market is set to attain the highest annual growth rate of 24.2% over 2016-2022. In addition, a large number of small and medium scale manufacturing units in the country is expected to augment the industry size in the years ahead.

Get a Sample Copy of this Report @ https://www.gminsights.com/request-sample/detail/121

Ionic liquids market is projected to surpass a volume of 50 kilo tons by 2022. Owing to their versatility and process efficiency, this liquid finds a wide set of applications in the food sector. Extraction, purification, separation, and derivation of biogenic compounds are the numerous areas of food processing unit where these solvents are gaining a huge popularity. Ionic liquids industry from food sector held a considerable share of almost 11% in 2014 and is projected to be one of the major application segments of the global market. Catalysis and synthesis dominated the ionic liquids application landscape in 2014, by accounting for 27% of the overall industry share. Increasing demand for lithium ion and lithium air batteries have increased the penetration of ionic liquids market in the electronics sector as well. Electronics application covered one tenth of the overall market in 2014 and is projected to grow substantially over the coming years.

U.S. Ionic liquids industry dominated the global landscape in 2014, with a revenue collection of over USD 200 million. It almost covered 35.9% of the total volume in the aforementioned year. Positive response toward usage of green solvents for numerous end use industries including pharmaceutical, chemical, oil and gas, food processing etc. is driving the expansion of regional ionic liquids market.

Toxicity issues of some of the traditional liquids such as tetraalkylammonium, N-alkylpyridinium over their release in water and soil is a persistent concern, which may act as a restraint in the industry growth. However, continuous technological interventions to upgrade the product quality is likely to add growth opportunities to the ionic liquids market. Prominent ionic liquids industry participants include Solvionic, Coorstek, BASF, TCI, and IOLITECH GmbH.