Blockchain market to garner profits via extensive demand from the BFSI sector, global industry to record a mammoth CAGR of 75% over 2018-2024

The last decade has witnessed a dramatic acceptance of distributed ledger technology for data security, a shift that has led to blockchain market emerging as one of the most trending business spheres. The potential scope of blockchain technology for money saving, record-keeping, and digital information sharing has been remarkably attracting most of the technology giants to deploy the blockchain at their workplaces. Core companies across the banking, telecommunication, smartphone, and healthcare service sectors have also been looking forward to extensively adopting blockchain technology, thereby augmenting blockchain industry share over the years ahead. 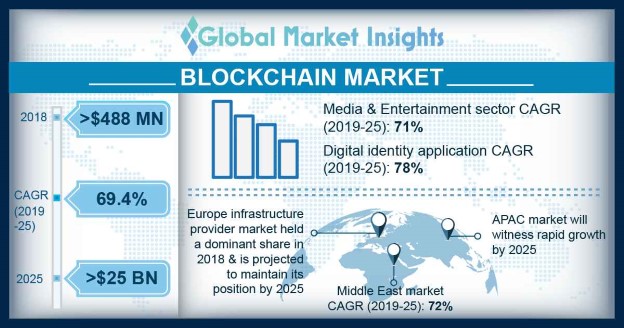 The emergence of blockchain in this modern technological era has indeed had a remarkable influence on the operational processes of several end-use sectors. The need for this technology has gained acceptance across several domains on account of its benefits over other existing technologies. A gist of how the implementation of the blockchain has impacted the BFSI sector has been enumerated in the paragraphs below.

How has blockchain technology proven to be an influential factor for BFSI?

The banking, financial services, and insurance (BFSI)industry is included among the most prominent business spheres that have successfully implemented the blockchain. The deployment of this technology has helped BFSI contenders reduce the infrastructure cost, owing to its capability of secure trading and cross-border payments. Taking into account the safety and financial benefits of blockchain, most of the banks are now looking forward to deploying compatible facilities alongside, which will favorably stimulate blockchain market size.

Validating the aforementioned fact, recently, the Bank of England updated its payments system to make it complement with blockchain technology. This announcement comes on the heels of BoE’s efforts to modernize banking systems to handle transactions securely. In fact, the bank designed this blockchain supporting financial technology to reduce the number of cyberattacks that cause a nuisance while performing banking as well as trading operations.

Get a Sample Copy of this Report @ https://www.gminsights.com/request-sample/detail/2194

Speaking more about the impact of initiatives taken by the giants in the banking industry on blockchain market, it would be imperative to state that some of the contenders of the former are looking forward to bringing revolutionary facilities given the large number of transactions that banks carry out per day. In fact, some of the banking and financial service companies are investing in the development of private blockchain platforms, which could have a significant influence on blockchain industry trends.

Citing an instance justifying the aforesaid, one of the largest UK based banks, Barclays, recently submitted a patent application regarding the development of a private blockchain platform that could be used for cryptocurrency transfer. The bank also plans to store customers’ information on its private blockchain. The streamlined deployment of blockchain technology across the BFSI sector is poised to boost product demand over the years ahead. For the record, in 2017, BFSI emerged as the dominant segment in blockchain market by accounting for 60% of the business share.

Indeed, since the last few years, many enterprises have deployed blockchain technology to store contract agreements, driven by which blockchain market size from smart contract applications is slated to grow at an annual growth rate of more than 80% over 2018-2024.

Speaking along the same lines, a few days before, the South Korean telecom behemoth, KT Corp launched a new blockchain technology assisted commercial network – a wireless technology that can be used for numerous services such as energy management, identity authentication and roaming. This technology restricted the use of the Internet and various new technologies such as the Internet of Things, that allows it reduces the chances of hacking and identity theft. In addition to this new launch, KT Corp is looking forward to using blockchain based identity authentication technology for electronic voting services and local currency.

The surging adoption of blockchain technology by various companies for ensuring an easy workflow and data security is poised to push blockchain market share. Moreover, the noteworthy benefits of this newly developed distributed ledger technology are significantly attracting large companies as well as SMBs to develop private blockchain platforms. Driven by the increasing need for financial capitalization, data protection, and network enhancement, blockchain market will generate a revenue of more than USD 16 billion by the end of 2024.