The increasing intensity of climate change and the subsequent issue of water scarcity have led to zero liquid discharge systems market gaining substantial significance. Indeed, the system has become an integral component of numerous industrial sectors, consolidating the market into a lucrative investment ground. 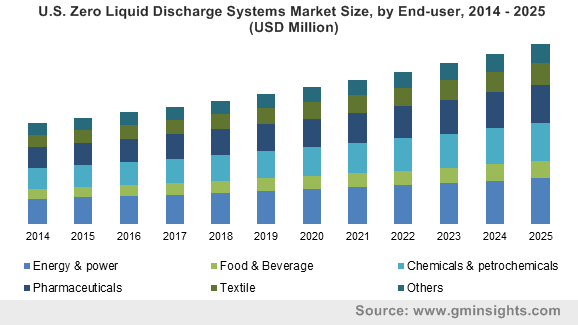 According to a research by the World Resources Institute, climate change is rampant, turning the world’s hottest regions even hotter. Meanwhile, as the planet warms, clouds are moving away towards the poles from the equator, further depriving equatorial regions such as Central America, sub-Saharan Africa and the Middle East of rainwater. According to the United Nation’s UN Water, the issue of water scarcity is being further exacerbated as rapidly expanding urban areas are placing heavy pressure on water resources nearby, further straining the relationship between water demand & world development.

As these challenges continue to proliferate across the globe, the zero liquid discharge (ZLD) process of water treatment is expected to witness a substantial rise in adoption rates. With more and more enterprises looking to purify & recycle wastewater to dampen their impact on the environment, ZLD systems industry is expected to garner commendable traction ahead..

In 2018, the European Commission proposed new rules to promote and facilitate water reuse across the European Union for agricultural irrigation. These steps were introduced with the sole purpose of alleviating the pressure of water demands on natural water sources.

Get a Sample Copy of this Report @ https://www.gminsights.com/request-sample/detail/1961

Moreover, the challenge of water scarcity is no longer confined to a select number of regions across Europe and has started to rapidly become a major concern across the EU. In fact, water scarcity & stress is slated to affect approximately 50% of Europe’s river basins by 2030.

The Potential: The European Commission has identified that the EU needs to manage its water resources in a more efficient manner and an effective way to achieve that efficiency is to treat recycled water from ZLD systems as an alternative water supply source. In 2018, the Europe ZLD systems market raised over $1.5 billion in revenues, having treated more than 40,000 million m3 of waste water, however, the continent only reuses 964 million m3 of the treated wastewater.

The potential for additional uptake is quite massive, as the region could reuse more than six times the volume of recycled water that is used currently, presenting a substantial opportunity for the growth of the regional ZLD systems market.

The Asia Pacific is home to a majority of the earth’s population & houses two of the world’s fastest growing economies; China & India. Apart from these two countries, the region is also home a number of developing nations.

According to a report by China Water Risk (CWR), the adoption of ZLD systems in China is being fueled by the unlikeliest of factors – the nation’s thermal power air pollution reduction process, which produces complex and extremely hard to treat wastewater as a byproduct. Moreover, unless a power plant is air cooled, water is by far the most prominently used cooling solution in China, which accounts for approximately 70% to 80% of wastewater volumes.

Driven by such copious availability of waste water, ZLD systems are gaining considerable traction across many industrial sectors across the nation, providing further growth opportunities for the regional ZLD systems market players.

According a report by Global Market Insights, Inc., propelled by severe environmental challenges and the ongoing economic development of several nations like India and China, the global ZLD systems market is projected to surpass the $9 billion renumeration mark by 2025.