The growing number of technological advancements in cancer screening techniques have underlined the significance of in-vitro colorectal cancer screening tests market across the ever-evolving healthcare and medical devices industry. At the same time, the increasing demand for non-invasive cancer diagnosis methods has been a pivotal factor to have created a slew of business opportunities for companies operating in this vertical. With an overall valuation of about USD 785 million in the year 2016, in-vitro colorectal cancer screening tests market is projected to proliferate at an exceptional pace in the times to come. 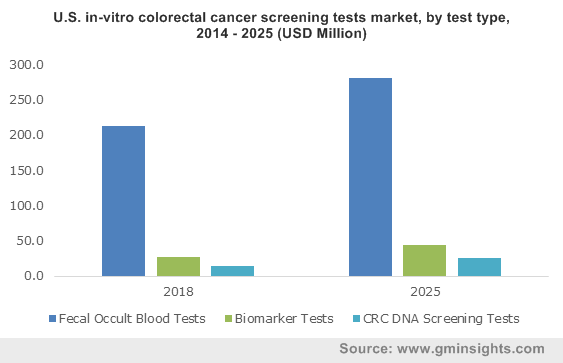 The latest trends affecting in-vitro colorectal cancer screening tests industry: How a slew of regulatory approvals have shaped the expanse of this business sphere

With an exclusive focus on the early detection and prevention of colorectal cancer, prominent in-vitro colorectal cancer screening tests industry contenders have, of late, focused on unveiling easy-to-use and patient-friendly screening assessments and test kits. Apparently, these tests have been proving to be beneficial for people of the age group of 50 and older who are at an average risk of developing colorectal cancer. Moreover, numerous innovative tests have been well-received by the healthcare regulatory authorities in the recent past which has had an optimistic influence on the overall growth potential of in-vitro colorectal cancer screening tests market. Enumerated below are a few noteworthy instances of regulatory approvals:

Get a Sample Copy of this Report:@ https://www.gminsights.com/request-sample/detail/451

Speaking of the geographical growth outlook of this business sphere, the United States has persisted to be the forerunner across the North America in-vitro colorectal cancer screening tests market in 2016. Owing to unhealthy dietary habits, sedentary lifestyle, and rising levels of alcohol consumption, the prevalence of colorectal cancer among the residents of the nation has aggravated in the recent past. Moreover, due to the lack of patient compliance with screening tests recommended by healthcare professionals, colorectal cancer has emerged as one of the leading causes of cancer-related deaths in the U.S. According to reliable estimates, around 23 million Americans between the age of 50 and 75 avoid getting screened each year.

With several private and public undertakings unveiling highly effective awareness programs pertaining to the significance of screening tests coupled with technological advancements in diagnostic methodologies, the commercialization scale of in-vitro colorectal cancer screening tests industry appears highly promising. In fact, according to a research report put together by Global Market Insights, Inc., the total revenue share of this business space is forecast to surpass the billion-dollar frontier by 2024.

Global Carcinoembryonic Antigen Market is set to register profitable growth in the near future and surpass USD 2.8 billion by 2023. This growth is attributed to factors including consistent technology advancements, development of novel biomarkers and growing prevalence of cancer. Global Market Insights, Inc. announces the addition of a new research report on Carcinoembryonic Antigen (CEA) market to their offering.

The report gives you a basic overview of the CEA market with market definition, applications, segmentation, and value chain analysis. The report covers competitive landscape with the leading company profiles and recent events in the industry. Equipped with all vital information including current scenario, forecasts, and future predictions, it offers insights to foresee challenges and opportunities that will aid in making informed decisions.

Growing demand for minimally invasive diagnostics procedures is projected to contribute a significant part in shaping market growth. Increasing geriatric population is another key factor to intensify the Carcinoembryonic Antigen market growth. The development of novel combination biomarkers and initiatives by the government concerning improved diagnostic rates are likely to open growth avenues for CEA market. The advent of various tumor markers, which can be used along with CEA to monitor or diagnose colorectal cancer is predicted to influence the market growth positively.

North America, hinged on the U.S. Carcinoembryonic Antigen market size, is predicted to lead the segment with estimations of USD 800 million in 2016. Growing awareness about detecting cancer at an early stage and improved health care services for cancer therapeutics are anticipated to propel growth. Asia-Pacific region driven by India and China is targeted to foresee growing prevalence of cancer owing to changes in lifestyle and aging population in the area. The growth is mainly attributed to improved treatment facilities and high disposable income. The Asia-Pacific market share can surpass USD 380 million in the near future.

Colorectal cancer tops the application segment and is expected to foresee growth over the forecast period. Breast cancer segment is likely to be the most lucrative with estimations of over USD 460 million at over 7% CAGR during the projected time frame.

Get a Sample Copy of this Report @ https://www.gminsights.com/request-sample/detail/427

The key players in global carcinoembryonic antigen market include

Focus on early detection methods and product innovation owing to rising demand for minimally invasive procedures is a key strategy adopted by the key participants in the market.