A brief elucidation of consumer drone market trends in terms of regulatory landscape, technology proliferations to underline the competitive terrain

Powered by the advent of sophisticated machine learning algorithms and growing integration of AI, consumer UAV market size has been skyrocketing in the recent times. There has been a phenomenal spurt in the number of drone operators world over who buy high-grade and technologically superior drones with an aim to utilize them commercially. Apparently, the escalating demand for UAVs from diverse business sectors has compelled the prominent consumer drone industry participants to incorporate latest technologies such as geofencing and collision detection into these flying beauties. 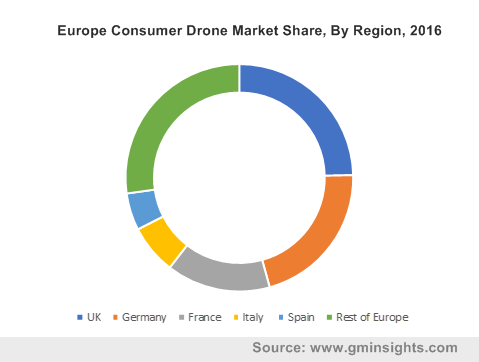 Citing an instance of the same, one of the major consumer drone market players of France, Parrot has created a new division, named as Parrot Professional, to integrate its consumer and commercial grade drone technology. It would be prudent to mention that the firm deployed the said technology and has recently introduced new drones which can be utilized across agricultural and construction sectors.

Moreover, the latest drones would reportedly act as a bridge between Parrot’s low-priced and other highly-expensive consumer products. The launch of such innovative and cost-effective products would prove to be of immense convenience for operators to fly UAVs for commercial purposes, which would consequentially boost the consumer drone market in the ensuing years. In fact, as per reliable estimates, the overall remuneration portfolio of the global consumer drone industry is forecast to exceed USD 9 billion by the year 2024.

Get a Sample Copy of this Report @ https://www.gminsights.com/request-sample/detail/1590

Elaborating the consumer UAV market trends in the U.S. and Australia with regulatory frame of reference

In an attempt to promote awareness among media, policymakers, and the general public of how UAVs assist society, renowned consumer drone market giants such as 3DR, DJI, and GoPro have formed ‘Alliance for Drone Innovation’ (ADI). The latest initiative is the successor organization to the Drone Manufacturers Alliance and represents the interest of businesses, individuals, academics, scientists, and governments, and others who fly drones in the United States.

The ADI initiative would work on devising appropriate regulatory and legislative framework, as well as focus on developing new technological capabilities of drones. The group would preserve the role of Federal Aviation Administration and the Congress to regulate National Airspace System for drones. Owing to the regulatory guidelines and various initiatives being undertaken by chief market players, the US consumer drone industry share would undoubtedly witness substantial progression in the near future.

Being one of the first nations in the world to regulate remotely controlled aircrafts, the Civil Aviation Safety Authority (CASA) of Australia has been pivotal to frame regulatory provisions regarding consumer drones. Apparently, CASA has put into effect a new set of guidelines from September 2016 which have lowered the mandatory requirements to fly small remotely piloted UAVs for commercial purposes. Reportedly, flying drones which weigh less than 2Kg would not require a remote pilot license (RePL) or operator’s certificate. However, the drone owners would need to hold an operator’s certificate to fly UAVs weighing in excess of 2Kg. Industry experts have opined that the operationalization of these guidelines would substantially influence Australia consumer drone market outlook.

It is imperative to mention that along with stringent regulations with regard to safety parameters of these drones, cost is another pivotal factor influencing the consumer UAV industry trends. These UAVs work on batteries unlike the military drones that are operated by solar energy. This not only makes the former expensive but also demands a high maintenance. Nonetheless, considering that the fraternity is still nascent and a slew of tech interventions are in the pipeline, consumer drones market trends are anticipated to be progressive in the coming years. In terms of commercialization, the consumer UAV market is forecast to register a double-digit CAGR of 18% over 2017-2024.