The world is witnessing a proliferation in seaborne trade, which is likely to stimulate marine diesel engines market over the years ahead. The cost of the fuel is a major factor that is influencing the trade profitability. Recent fluctuations in the fuel price which is currently on a higher end, is turning out to be favorable for the industry players. According to a report by UNCTAD (United Nations Conference on Trade and Development) in 2015, sea borne trade expanded over 4% from 2012 to 2014, subject to the significant increase in dry bulk trade. Alongside, easy availability of spare parts, trained repairing personal, and repair networks have also catalyzed the adoption of these diesel engines. As per a report by Global Market Insights, Inc., “Marine Diesel Engines Market is slated to exceed a revenue of USD 7 billion by the end of 2024, with a CAGR projection of 5% over 2016-2024.” 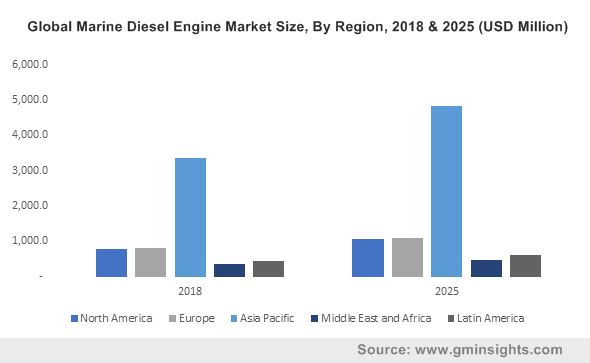 Increasing demand for economically viable engines that are best fit to fulfill reliability, durability, and fuel optimization is further complementing marine diesel engines market penetration. Over the past few years, the shipping industry has been largely emphasizing on developing advanced engines that improve the fuel efficiency and reduce carbon dioxide emission. Marine diesel engines operate at an average efficiency of 40% to 50% depending upon the age of the engine, deadweight tonnage, and vessel size.  Phasing out of traditional steam engines from various utility sectors is further providing a significant push to marine diesel engines market.

Get a Sample Copy of this Report @ https://www.gminsights.com/request-sample/detail/158

Merchant vessels are one of the prominent application domains that is prominently contributing toward the global industry size. Growing inclination toward LNG along with a significant rise in the sea borne trade have resulted in an increasing deployment of marine diesel engines in merchant vessels, thereby contributing to the industry share. As per estimates, marine diesel engines market from merchant vessels application is expected to chart a profitable road map at a CAGR of 5% over 2016-2024.