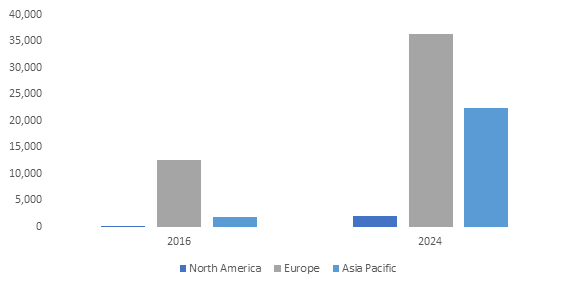 Steam autoclaves market is likely to traverse alongside a lucrative path in the forthcoming years, pertaining to the increasing awareness among the regulatory bodies about the importance of sterilization and decontamination for healthcare and food applications. Since a while now, influenced by the lure of profits, a substantial number of F&B companies have been adopting unhygienic alternatives in the food manufacturing process. In consequence, to maintain health and hygiene, the Food and Drug Administration (FDA) has deployed strict norms to control food safety exploitations by food manufacturers. Taking into account the immense demand for hygiene maintenance, local food manufacturers, restaurants, and hospitals are increasingly giving preference to steam autoclaves for sterilization, which will significantly impel the overall steam autoclaves industry share. 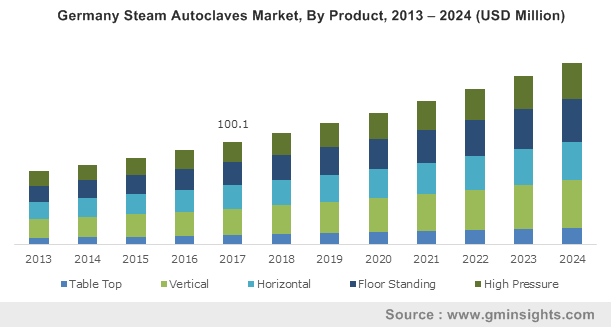 Regulatory bodies such as the World Health Organization (WHO) are also taking initiatives to enable hospitals and other healthcare service providers to use decontaminated devices for enhancing the effectiveness and life span of the product. Considering the future scope of sterilization for medical applications, many researchers have been continuously involved in the development of several sterilization products for medical device packaging. In 2016 alone, medical applications accounted for a major share of steam autoclaves industry. It is prudent to mention that many non-governmental organizations and regional governments have also been supplying funds and equipment to hospitals, in a bid to adhere to hygiene standards. Recently, the government of San Luis invested USD 4,61,198 in the procurement of medical devices encompassing two autoclaves – one for sterilization and another for laboratory services. The aforementioned incidence testifies the contribution that regional governments have been making for encouraging the medical sector to adopt sterilization devices, that would considerably influence steam autoclaves market size.

Get a Sample Copy of this Report:@ https://www.gminsights.com/request-sample/detail/500

Lately, it has been observed that steam autoclaves industry giants have shifted their focus toward the development of customer friendly products to strengthen their presence across the business space. Many of the manufactures have been collecting feedback from consumers to design customized products. Furthermore, industry giants are investing heavily in research and development activities as well, in a bid to reduce the water consumption in laboratory autoclaves. Consolidated Sterilizer Systems in fact, recently launched two innovative vertical sliding door autoclaves along with the implementation of a power door feature for simplified maintenance and ease of application. The currently prevalent competitive scenario across this vertical is likely to bring forth the launch of innovative products, which would eventually impel the commercialization potential of steam autoclaves market.

Significant government strategies pertaining to the growth of the healthcare sector will continue to remain one of the most prominent drivers of steam autoclaves market. For instance, under the scheme of Make in India, the Indian government has encouraged medical equipment manufacturers across the country to develop exclusive products that would be commercialized under the Indian brand name. Driven by the escalating development of large capacity and cost-effective products, it has been predicted that steam autoclaves industry will surpass a revenue collection of USD 3 billion by the end of 2024.

Global solar trackers market is anticipated to accumulate commendable proceeds over the forecast spell owing to emerging concerns pertaining to changes in climate condition. These changes have given rise to numerous government mandates encouraging the adoption of solar energy systems to cater to the growing demand for electricity due to rapid commercialization and urbanization, in turn boost industry demand.

Additionally, many regulatory norms regarding the mitigation of carbon emissions and specific emphasis on efficient and sustainable energy consumption are likely to add impetus to solar tracker market growth in the coming years.

Several targets for sustainable energy have been put forth by governments worldwide in order to proliferate the implementation of photovoltaic (PV) generation systems, thereby fueling solar tracker industry dynamics.

Moreover, industry demand is further bolstered by the product’s beneficial characteristics including reduction in energy costs and high CUF. As per estimates from credible sources, global solar tracker installations are expected to surpass 30GW by 2025.

Get a Sample Copy of this Report@ https://www.gminsights.com/request-sample/detail/364

As environmental concerns continue to surge, myriad policies and strict mandates have been established across the commercial and utility sectors, encouraging industry players to inhibit their carbon footprints through the adoption of sustainable energy systems.

Growing expenditure towards the construction of commercial infrastructure, including hospitals, shopping centers, and schools has accelerated the deployment of solar panels to accommodate the demand for continuous supply of electricity.

Consumers, over the recent years, are beginning to make higher use of solar trackers in efficient energy systems, with the goal of augmenting the capacity utilization factor and reaping the benefits through tax credits, incentives, and subsidies.

Taking into consideration the product spectrum, the dual axis solar tracker segment is poised to amass hefty proceeds in the years ahead, given its strong capability for providing two-degree flexibility, leading to a nearly 45% improvement in energy generation as compared to its traditional PV counterpart. As a result, dual axis solar tracker systems are witnessing robust demand across Concentrated Solar Power (CSP) and Concentrator Photovoltaics (CPV) power plants.

In fact, these energy systems observe widespread acceptance across many industries due to their high-performance level as opposed to alternative energy sources, which in turn would impel solar tracker industry growth.

Dwindling solar panel costs alongside the enactment of ongoing strict environmental initiatives have resulted in extensive installation of solar trackers in North America. Due to their declining supply chain costs and enhanced module performance, PV tracker systems have seen a substantial rise in demand over the past few years. Manufacturing companies are making heavy investments towards R&D endeavors to further enhance the overall efficiency of the solar power system, thereby complementing industry outlook.

Optimistic outlook towards the deployment of photovoltaic systems across North America is expected to bolster solar tracker market size. In order to achieve a competitive edge over other market players, enterprises are largely focused on producing low-cost and efficient energy products.