Leveraging government regulations that focus on reducing road accidents and improving vehicle safety, automotive night vision system market is anticipated to establish itself as a lucrative avenue of investment in forthcoming years. Automotive night vision can be described as a cluster of loosely-related technologies that have the capability to enhance driver’s situational awareness when the vehicle encounters reduced road visibility in low-light conditions. 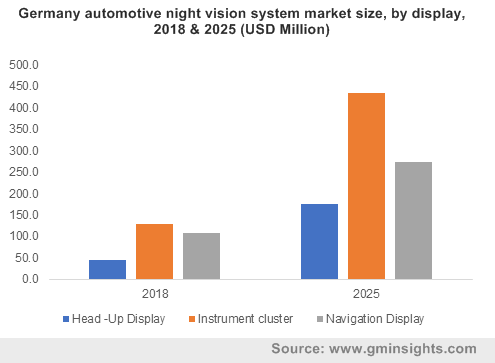 Get a Sample Copy of this Report:@ https://www.gminsights.com/request-sample/detail/2335

According to Mercedes-Benz, its Night View Assist Plus feature goes a step further by recognizing obstacles, such as large animals and pedestrians, sooner and highlighting them on the driver’s console. The night vision system is also capable of distinguishing actual obstacles from irrelevant roadside objects such as bushes and road signs.

According to the reports of the National Highway Traffic Safety Administration, in 2016, nearly 37,461 fatalities had been observed due to road accidents across U.S. – a momentous rise of 5.6% than the previous year’s numbers. Moreover, the U.S. based insurance and financial service company, State Farm claimed that, between July 2017 and June 2018, animal collisions accounted for 1.33 million road accident cases.

Earlier, astronomical equipment prices prevented widescale penetration of night vision systems and relegated them to the luxury vehicle segment. However, increasing affordability of components such as infrared cameras and the prevalent trend of customers and regulatory authorities demanding more road safety are expected to foster industry growth in coming years.

The anticipated rise of autonomous vehicles is expected to emerge as a major proponent for automotive night vision system industry during the forecast timeframe. Autonomous driving systems rely upon an array of technologies including radar, LiDAR, cameras and image recognition to drive the vehicle with minimal human intervention.

While the aforementioned technologies allow vehicles to be driven without human input, there are serious limitations to the conditions they can operate in. One such limitation came to light in 2018, when Uber’s self-driving vehicle struck and killed a pedestrian. The accident occurred at night and a majority of blame fell on the vehicle’s sensor array that consistently failed to recognize the pedestrian in low light conditions. Taking such incidents into account, regulatory bodies have been working to frame new road safety guidelines.

From a regional perspective, Europe and North America are expected to have significant share of automotive night vision system market landscape during the forecast timeframe. Presence of several key automotive industry players, stringent government regulations and a customer base that prioritizes safety above all else are expected to foster market growth over 2019-2025.

Overall, automobile night vision system’s changing reputation from a clever luxury feature to an integral vehicle safety feature would ensure its widespread adoption across a number of vehicle segments in forthcoming years. In fact, according to a Global Market Insights, Inc., research report, automotive night vision system market is expected to surpass a $4.5 billion valuation by 2025.

Passenger-vehicle based automotive HMI market to amass substantial returns by 2024, surging use of digital technology in newly developed vehicles to fuel the product demand

Automotive human-machine interface (HMI) market has lately emerged as one of the massive revenue generating spheres in the automotive sector with the shifting trends toward the adoption of smart vehicles. Traditionally, pertaining to the lack of advanced infotainment and digitalized internal car design, drivers had been unable to operate the vehicle efficiently. However, with the advent of new technology trends, the overall design structure of automobiles has changed considerably, paving the way for integrated human-machine interface in vehicles. The development of connected cars for decreasing the chances of accidents and enhancing the operability of vehicles has also helped propel automotive human machine interface industry share. 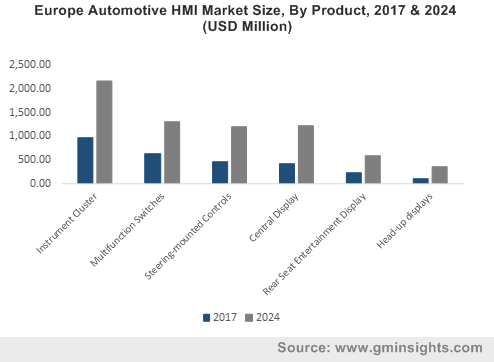 One of the most pivotal driving forces of automotive human-machine interface market is the emergence of smartphones, artificial intelligence, IoT (Internet of Things), and machine learning technologies that have substantially encouraged automakers to carry out product development activities for transforming the existing infotainment system of the vehicle. Validating the aforementioned fact, recently, the American automotive electronics supplier Visteon Corporation developed a next-generation cockpit controller, SmartCore that has been deployed in Daimler’s upcoming Mercedes-Benz A-Class vehicles. These will be the world’s first vehicles integrated with intelligent cockpit controllers with multiple central processing units. The deployment of such features in the interior design enhances a vehicle’s infotainment display and instrument cluster. Moreover, it also helps drivers personalize their experience by simply operating touchscreen and touchpad on the steering wheel.

Get a Sample Copy of this Report:@ https://www.gminsights.com/request-sample/detail/2918

Increasing awareness among the regulators and regional governments about the surging need for vehicle security and safety has been driving the requirement of the instrument clusters and digital infotainment systems. The policymakers claim that the implementation of a human-machine interface will help the driver collect accurate information about the surrounding environment. In order to comply with the stringent regulatory compliances, most of the automakers, technology companies, manufacturers, and designers have been striving to innovate advanced solutions for passenger vehicles and connected cars. Indeed, passenger vehicles are expected to account for nearly 80% share of automotive human machine interface market by the end of 2024.

Speaking beyond the conventional vehicular systems, the increasing popularity of autonomous vehicles will have a notable influence on the automotive HMI market trends over the years ahead. Focusing on the shifting trends toward the growing adoption of autonomous vehicles across the globe, companies involved in the development of human-machine interfaces have been developing innovative software packages. For instance, a few days before, leading supplier of advanced semiconductor solutions, Renesas Electronics Corporation has introduced a new microprocessor unit to accelerate and simplify the development of modernized HMI and camera-based applications. The newly developed software interface can be used for operating video surveillance systems, fingerprint access control, information communication technology applications that have been deployed in automobiles. The growing popularity of HMI for managing vehicular systems in a highly sophisticated way is poised to stimulate the future product demand.

As of now, motorcycle manufacturers have also been integrating HMI technology in the vehicle for improving performance, driving experience, and safety. Few weeks before, the British electric motorbike manufacturer had launched a fully electric motorcycle with human-machine interface. The evolution of e-bikes for promoting high performance and energy security is poised to have a considerable impact on the demand for HMI. In addition, considering the future energy benefits and depleting fossil fuel resources, most of the regional governments have been implementing a supportive regulatory framework to enhance the deployment of e-vehicles that also will fuel the product demand.

The surging use of digital technology in vehicles for achieving better performance and sustainability will transform the future of the automotive industry. The extensive utilization of software for enabling numerous operational packages comprising functional safety, cybersecurity, and infotainment system will also stimulate industry trends. For the record, by the of 2024, automotive human machine interface (HMI) market will surpass a revenue collection of USD 27 billion.