Soy isoflavones market to register massive a surge by 2025, rising trend of veganism to also add stimulus to the industry growth

In the recent decades, the isoflavone market has registered a commendable year-on-year growth as research studies have continued to illuminate the positive properties of isoflavones. As data is piling up in support of isoflavones, which is class of phytochemicals (compounds found only in plants), health conscious consumers are turning towards the consumption of greater quantity of soybeans, chickpeas and other legumes, all of which are rich in isoflavones.

Isoflavones are also a type of phytoestrogen that resembles human estrogen in chemical structure. By imitating the functions of human estrogen at certain sites in the body, isoflavones provide many benefits that can prevent illness and promote good health. Soybeans have found to be richest source of these powerful compounds as it not only contains many individual isoflavones, but also the most beneficial ones, namely, genistein and daidzein. With soy beans being increasingly consumed around world which has recently been gripped by veganism, the isoflavones market is also anticipated to gain commendable profits in the coming years. 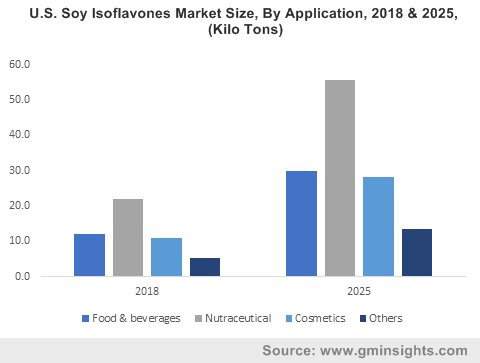 To elaborate on the benefits of isoflavones and especially that of genistein, it should be mentioned that genistein has the ability to block the buildup of harmful testosterones or dihydrotestosterone that is linked to prostate cancer and prostate enlargement as it acts as a natural inhibitor of the enzyme that converts testosterones in dihydrotestosterone. Besides this soy isoflavones have found to exhibit a number of other anti-cancer effects besides having antioxidant properties which protect the cardiovascular system from oxidation of LDL cholesterol.

Oxidized LDL cholesterol is known to cause atherosclerosis by accumulating in the arteries as fatty buildup blocking the flow of blood. Arteries damaged by atherosclerosis usually form blood clots that can lead to a heart attack or even stroke. Genistein has properties that prevent artery clogging plaque. Rising incidence of cardiovascular disorders are one of the leading reasons that research into the benefits of isoflavones and consumption of soy beans is becoming stronger. With medical practitioners and nutritionists emphasizing the benefits of soy consumption, the soy isoflavones industry is receiving an immense impetus and is projected to record a CAGR of 13.5% over 2019-2025.

Get a Sample Copy of this Report @ https://www.gminsights.com/request-sample/detail/3077

Besides cardiovascular disorders, isoflavones have also been found to be functional for alleviating hormone dependent physiological disorders such as osteoporosis and postmenopausal symptoms. Isoflavones have proved to be better suited for treatment procedures that replace hormones such as estrogen hormone replacement therapy and shows none of the negative effects that occur too often with conventional therapies with hormones.

For instance, studies have shown that estrogens can slow down the aging process of the skin in postmenopausal women. This has prompted many women to opt for hormone replacement therapies as the level of estrogen declines rapidly in postmenopausal women, speeding up the aging process. But with isoflavones having found favor in cosmetic formulations, not only for anti-aging benefits but also for treating irritating skin conditions including rashes, eczema and psoriasis, isoflavones industry has received a sizeable boost from the cosmetics market. Considering that anti-aging products are touted to garner commendable acclaim in 2019 and ahead, isoflavones market will register a massive increase in revenue from cosmetic applications over 2019-2025.

Another reason that has helped isoflavones market is the stellar rise of popularity of a vegan diet. As consumers around the world have become aware of the ecological burden of meat and dairy consumption, veganism has rapidly become mainstream. Surveys have shown that more than 50% of Americans have come to support ban of slaughterhouses and around 70% have admitted to being uncomfortable with poor treatment of animals, which in part explains why veganism rose by 600% in the country between 2014 and 2017.

The trend has been noted in other parts of the world as well with 8% of people in the UK being vegan in 2018 and Australians also showing similar trends. Rising incidence of disease and obesity has played its part in this surge of veganism. As such meat substitutes have become very popular and consumption of soy products like tofu and tempeh having registered a massive growth, has in turn added remarkable stimulus to the isoflavones market. Considering that mindful eating and awareness of food components, including chemical content of food is gaining rapid popularity, the isoflavones market is expected to amount to $30 billion by 2025 in terms of revenue.