Owing to the rising deployment of LPWA technologies, including LTE-M, NB-IoT, and LoRa, low power wide area network (LPWAN) market share is witnessing an increased traction in the recent years. Interestingly, LPWAN networks have emerged as popular choice among enterprises to support various IoT use cases and solutions for business sectors such as agriculture, manufacturing, logistics, and healthcare, among others. Enumerated below are three major factors that are shaping the growth prospects of LPWAN market. 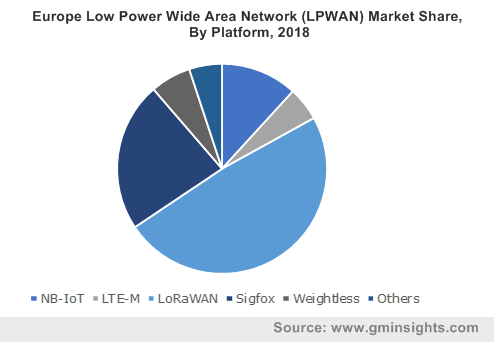 The NB-IoT network of Vodafone was deployed across Madrid and Valencia in 2017 in a number of verticals such as retail, electricity, agriculture, waste management, and smart city services. This technology has now been expanded to all localities in the cities of Seville, Malaga, Bilbao, and Barcelona, covering a population of about 25,000.

This program has apparently played a vital role in scaling the development and deployment of LoRa devices (based on IoT solutions) and has been of immense significance for expanding the South Korea LPWAN industry size.

Needless to mention, this network and support program will provide an opportunity to digital start-ups and small and medium-scale enterprises to use IoT and drive innovation across London.

Apart from massive expansion programs and large-scale investment, the use of licensed spectrum enables the telecom operators to provide customers with the same levels of security as its LTE network. This makes it immune to disruptive and alternative technologies, essentially opening up numerous business opportunities for LPWAN market players.

Get a Sample Copy of this Report:@ https://www.gminsights.com/request-sample/detail/674

Besides the rising volume of investment by telecom operators, the increasing prominence of industrial IoT market in various business verticals – especially the manufacturing sector – has invariably led to an escalation in the demand for LPWA technologies. This momentum is expected to remain consistent in the upcoming years as the industrial IoT connections are slated to increase by about five times by 2025.

In fact, the German wing of PwC released its findings last year of what the firm expects of the impact to be created by industrial IoT in the German manufacturing sector. Apparently, these findings note that about 90 percent of the respondents are investing in digital factories and a lot of these companies expect a 12 percent efficiency gains over the next five years owing to industrial IoT. Unsurprisingly, these statistics present an optimistic picture of the adoption of industrial IoT solutions, which will consequentially assist the regional LPWAN industry in reaching out to a new base of customers in the times to come.

One of the major factors fueling the commercialization prospects of LPWAN industry is the steady increase in the volume of investment pertaining to 5G technology. In this context, it is important to take note of the fact that the mobile IoT technologies, such as LTE-M and NB-IoT, offer a cost-effective wide area coverage while ensuring the success of 5G network deployment.

The 5G technology would enable major telecom firms across the globe to provide high connectivity to support numerous IoT use cases. Taking this factor into account, various telecom firms including Orange, Vodafone, and Airtel are deploying licensed cellular LPWAN as a prominent component of their 5G development strategies.

In a nutshell, the increasing volume of investment by telecom firms in expanding the NB-IoT and LoRaWAN networks, the advent of 5G technology and its development, and the rise in industrial IoT connections has been fueling LPWAN market share. As per a research report by Global Market Insights, Inc., LPWAN industry size is slated to exceed USD 65 billion by 2025.