Medical marijuana market to register an appreciable CAGR of 36% over 2018-2024, Germany to emerge as a vital regional contender

A news that has lately set the global medical marijuana market ablaze, is that of the Canadian Government passing the Cannabis Act for the official legalization of the marijuana drug. According to reports, Justin Trudeau, the Canadian Prime Minister, has set October 17, 2018 as the official date for the announcement, following which adult marijuana will be available for the sale in authorized dispensaries. After Uruguay, Canada is only the second country in the world, and the first among the G7 nations to permit a legal market for marijuana. The instance clearly throws light on the vast market potential Canada will be holding for investors of both medical and recreational marijuana. 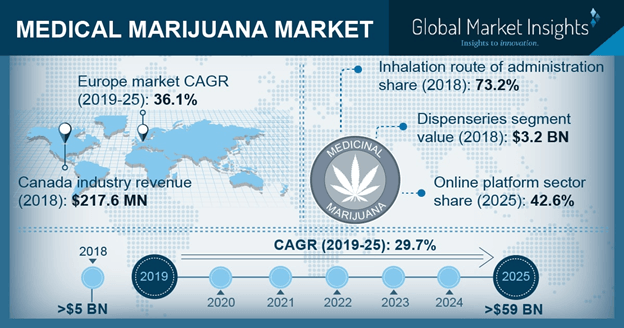 Meanwhile in the United States, reports claim that marijuana is legalized for medical purposes in 30 states and Puerto Rico, the District of Columbia, and Guam. Reliable studies have demonstrated the effective usage of medical marijuana in the treatment of chronic pain, migraines, and melancholia. The drug moreover, is also used in relieving the symptoms of multiple sclerosis, HIV/AIDS, glaucoma, and cancer. This in turn has substantially backed the modifications & relaxations in the drug policies of several governments. The National Health Interview Survey (NHIS), has estimated that there are around 25 million people across the U.S. suffering from pain on daily basis that in turn has triggered a surge regional medical marijuana market share & legalization of the drug for therapeutic purposes in the recent years. The relaxations in the law have also uplifted several companies to pour billions of dollars in research as well as in the commercialization of the product.

Recently for instance, WeedMD Inc., a licensed producer and distributor of medical cannabis has announced that it has collaborated with Revive Therapeutics Ltd. to focus on research and development & commercialization of novel cannabinoid-based therapies. Reports reveal that WeedMD will supply Revive with cannabidiol (CBD) and delta-9-tetrahydrocannabinol (THC), which are the two main chemicals used for medical purposes that will in turn evaluate the treatment of liver disease, autoimmune hepatitis, and non-alcoholic steatohepatitis.

Get a Sample Copy of this Report:@ https://www.gminsights.com/request-sample/detail/2836

In another turn of events, WeedMD, has also signed a joint agreement with Phivida Holdings Inc., to develop & operate Cannabis Beverages Inc., at its Strathroy-based greenhouse facility, Ontario. According to reports, the joint venture will focus on product manufacturing, marketing, development, and supply of cannabis-infused beverages for Canada as well as to licensed international markets. The CBD-infused products market valuation in Canada alone is about USD 5.6 billion – according to the Consumer Health Products Canada. And the duo, leveraging the proven product demand, is expected to position themselves well enough in the growing marijuana market.

The rigorous relaxations and modifications in drug policies to increase the access to the drug from several countries have led to an extraordinary expansion of the online medical marijuana market. The legalization has further paved way for customers & patients to opt for more convenient ways such as mail orders. The online buying process is further gaining traction, given the complete privacy and discreetness this distribution channel provides.

All in all, with support from the regional governments and emergence of new business opportunities through e-commerce, this market is expected to emerge as one of the most profitable business spaces of its time. Further shedding light on the commercialization matrix, a report by Global Market Insights, Inc., claims the global medical marijuana industry to hit USD 55 billion by 2024.