The global natural gas liquid market come to forge several growth avenues in recent times, chiefly due to the diverse applications of natural gas liquids such as ethane, propane butane and pentane plus in industrial processes. Indeed, manufacturing plastic and producing petrochemical feedstock to create ethylene and propylene, synthetic rubber, etc., are rather commonplace across industries. The continued growth of these sectors will add stimulus to natural gas liquid market, the size of which is expected to surpass 14 million barrels per day by 2025. 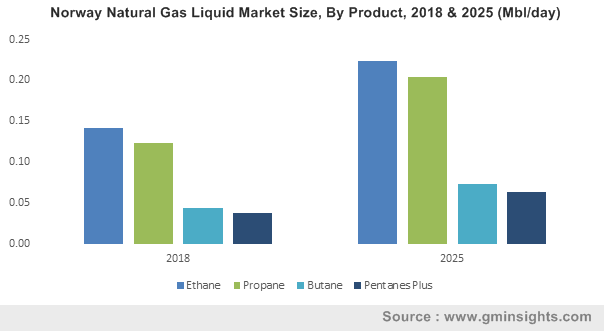 Though the world is debating the effects of plastics on the environment, the oil and gas sector has projected that plastics and chemicals will record sharp rise in demand and will end up compensating for shrinking demand for gasoline post 2030. Such projections are supported by the increased demand for ethane registered in the petrochemicals industry as ethane is the natural gas liquid feedstock of choice for this particular industry.

It is being speculated that the global natural gas liquid market will receive immense impetus from the expansion of the plastics industry. In spite of the hue and cry against the use of plastics, according to a report by the International Energy Agency, the demand for plastics has actually doubled since 2000. Oil and gas companies have spent several billion dollars developing petrochemical plants across the globe to meet the growing demand for ethylene, the building block of plastic that comes from ethane.

Get a Sample Copy of this Report:@ https://www.gminsights.com/request-sample/detail/3270

To further elaborate on the matter, it should be mentioned that in the U.S. domestic ethane production is anticipated to surpass 2 million barrels per day by 2021. Experts are of the opinion that nearly two-third of the increased ethane production capacity will be allotted to producing ethylene, which is used in the manufacturing of polyethylene, the most common type of plastic used around the world. According to estimates, over 2019 – 2020, the U.S. will add approximately 6.1 million tons of ethylene production capacity, which will far outdo the 304,000 tons capacity anticipated from the Middle East.

Ethane is a key feedstock for petrochemical manufacturing and the U.S. petrochemical industry reacted to increased feedstock accessibility and resultant lower prices of ethane by adding capacity to existing plants. For instance, ExxonMobil plans a $2 billion expansion of its petrochemicals complex located at Baytown, Texas. The expansion is the latest round of extension underway that has mainly been undertaken due to the cheap U.S. natural gas liquids unearthed by the domestic gas shale boom. The U.S. is currently planning to expand the petrochemical infrastructure of the country with an investment of more than $200 billion and many projects are either already operational or under construction. ExxonMobil’s project is only one instance of the immense progress of the petrochemical industry in the country.

Natural gas liquids are possibly some of the most underappreciated chemical feedstocks that play a considerable role in the manufacturing of numerous consumer goods. For instance, in the case of a simple running shoes, the outsole and midsole of the shoe are made of sturdy polyurethane foam, the insole cushion is made of ethylene vinyl acetate (EVA) an ethylene derivative and the exterior is of nylon, a derivative of benzene.

All of these are natural gas liquid derivatives which are all pervasive and can be found in heating fuels, building materials, car parts, synthetic fabrics, carpeting, snowboards, backpacks, hiking boots and countless other items that are indispensable for the modern world. With the petrochemicals industry on the verge of experiencing a massive push from the shale boom in the U.S., it is only natural that the natural gas liquid market will boast of immense growth prospects over 2019-2025.