North America youth ATV & UTV market to be characterized by the advent of technologically upgraded vehicles, government efforts to impel industry expansion over 2018-2024

Owing to increasing preference toward off-roading events and the gradual uptick in recreational spending, the North America youth ATV & UTV market has garnered unprecedented traction in the past few years. Several private agencies, clubs, and organizations have been organizing recreation activities that consist of off-roading events across backcountry roads, trails and cross-country terrains. These events and competitions have led attracted youngsters toward adventure sports and motorsports which has, in turn, fueled the growth prospects of the North America youth ATV & UTV industry. 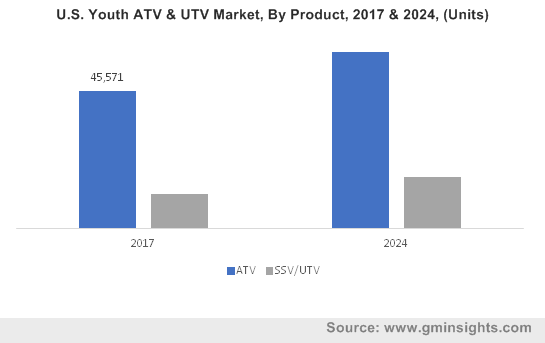 Even though the need to utilize off-road vehicles arose out of the challenges to tackle difficult geographical terrain and climatic conditions across various nations, the popularity of ATVs and UTVs has been on the rise in the recent times. These off-road vehicles have emerged as the most preferred vehicles for touring through national parks, beaches, and for racing purposes. North American nations like the U.S. and Canada have humongous national reserves and state parks where off-beat routes and trails have been built by the government.

Various state governments in the U.S. have been spending millions to construct and maintain off-road routes and trails in national parks – a factor that has invariably benefited the North America youth ATV & UTV industry. For instance, the policy board of the State Department of Natural Resources in Wisconsin approved a master plan in 2017 to add 200 miles of routes for ATVs in the Northern Highland-American Legion State Forest. Apart from commissioning new trails, the board has completed recreational opportunities analysis of a large parcel of natural area in northern Wisconsin and has further identified potential sites for ATV routes.

Needless to mention, the initiatives being undertaken by government authorities along with increasing budgetary allocations to build new off-road trails would be helpful for recreational enthusiasts and boost adventure sports in the region. That being said, numerous national parks in the states such as Wisconsin in the U.S. have emerged as major geographical terrains that assist North America youth ATV & UTV market participants to expand their commercialization scale in the recent times.

Get a Sample Copy of this Report:@ https://www.gminsights.com/request-sample/detail/2920

Subsequently, the companies operating in the North America youth ATV and UTV market have been proactive in incorporating advanced technologies in these vehicles, catering to the evolving requirements of enthusiasts participating in off-roading competitions. In this regard, it would be prudent to take note of the only single-seat youth off-road vehicle introduced last year by one of the chief industry magnates, Polaris.

Reportedly, ACE 150 EFI of Polaris is the only 150cc youth model with a protective cab frame and other safety features such as parking brake, whip flag, side nets, and daytime LED running lights. Such highly advanced ATVs armed with technologically superior safety features are being increasingly introduced by numerous companies in the U.S. over the recent years. Apart from launching high-grade off-road vehicles, the prominent North America youth ATV and UTV industry players have focused on enhancing the ergonomic design of these vehicles that undoubtedly allow easier handling for youth riders and enables seamless maneuverability over obstacles.

Although the profitability quotient of the North America youth ATV and UTV market appears highly promising, there are a few factors that might prove detrimental to the rapid product penetration in the years ahead. Rising number of accidents that are predominantly attributed to the ignorance of appropriate safety gear along with rash driving by youth could cast an adverse impact on the overall market share. According to an annual report published by the United States Consumer Product Safety Commission (CPSC), a total of 337 ATV-related fatalities were recorded across the nation in 2016. However, regulatory authorities including CPSC and other government bodies in various states of the U.S. and Canada are conducting various static and dynamic ATV-testing procedures to drastically improve the handling characteristics and identify methods to enhance the performance of these vehicles.

Owing to the launch of high-quality ATVs along with encouraging initiatives being rolled out by various governments across the continent, the North America youth ATV and UTV market is slated to register a commendable CAGR of more than 6.5 percent over the timespan of 2018 to 2024. In addition to this, the new testing guidelines and stringent regulatory overview would lead to the incorporation of more safety features in the forthcoming off-road vehicles, boosting the growth potential of the North America youth ATV and UTV industry.