U.S. oil pipeline infrastructure market valuation to amass hefty proceeds by 2025, regional industry to be characterized by the rising number of exploration activities

The global oil pipeline infrastructure market has emerged as one of the most lucrative investment avenues owing to the increasing demand for oil from a number of industrial sectors across the globe. Oil is still heavily used in transportation and petrochemicals are further utilized to manufacture a plethora of different products used in our day-to-day lives, including medicines, plastics, furniture, appliances, solar panels, wind turbines and cosmetics. With demand coming from such high appetite industries; it comes as no surprise that the level of oil consumption has grown substantially over the last few decades. 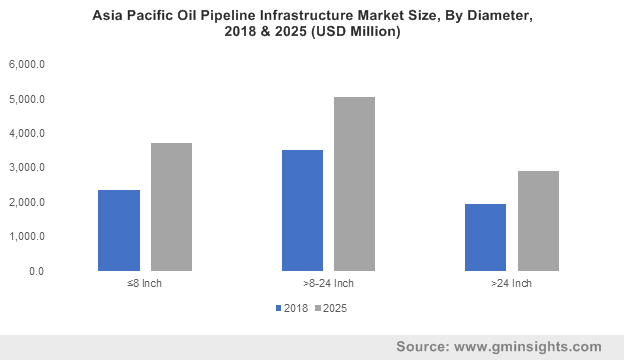 In fact, according to Forbes, the International Energy Agency discovered that global oil demand has been rising by approximately 1.3 million barrels per day (b/d) annually for the last 50 years. Moreover, by 2025, the world would be utilizing approximately 3.2 million gallons of oil-based liquids every minute.

The United States has been witnessing a massive boom in oil & natural gas production as shale companies started drilling hundreds of new wells since 2008. This sizable boost in production comes as a blessing to the region in one particular aspect that oil & gas would be accounting for a majority of the U.S. energy at least up until 2050.

The Gap: According to a Forbes report, the region has witnessed a 140% growth in oil & 50% natural gas production since 2008. However, despite oil pipeline infrastructure across the U.S. exceeding the 450,000 kilometers, the midstream infrastructure responsible for transporting the new supply across the nation has struggled to keep up.

The Demand: The considerable inadequacies of the oil pipeline infrastructure in the region creates a massive hurdle for the oil & gas industry when transporting oil across the nation. However, given the fact that pipelines are known to be one of the safest & most affordable methods of transporting energy, the industry is slated to boost investments and overcome the hurdle and facilitate oil pipeline infrastructure market growth in forthcoming years.

Get a Sample Copy of this Report:@ https://www.gminsights.com/request-sample/detail/3277

According to the International Energy Agency, the ever-expanding global economy is expected to promote a solid growth in oil demand, especially across regions with developing economies like the APAC.

The Connection: According to the International Monetary Fund, the global economy is expected to progress at a commendable y-o-y growth rate of 3.9% in forthcoming years and strong & rapidly growing economies would in turn consume more oil. In fact, the International Energy Agency expects demand to grow at an average yearly rate of 1.2 million barrels per day by 2023, with India & China accounting for 50% of the global demand.

The Growth: As the aforementioned statistics reveal a strong correlation between a nation’s economic growth and its oil consumption, it is apparent that the APAC oil industry would be expanding at a significant pace in the years to come. Such large consumption demand would require a robust network of oil pipeline infrastructure – a factor that would foster the expansion of oil pipeline infrastructure market share.

The MVP: India is projected to emerge as one of the world’s largest consumers of petroleum products, especially crude oil. This prediction can be corroborated by the estimates published by the Indian Brand Equity Foundation which claims that India’s oil imports rose substantially to $87.37 billion during FY17-18 from the $70.72 billion it was during the FY16-17.

Owing to such rapidly increasing volume of oil imports, India is expected to contribute significantly to the growth of the oil pipeline infrastructure market over the forecast timeframe.