Blockchain in energy market to procure modest proceeds from O&G applications, escalating concerns regarding the burden on grid networks to propel the industry expansion

The revenue graph of blockchain in energy market is poised to depict exponential growth as the need to develop & deploy new efficient ways of generating & delivering electricity, under the Paris Agreement, intensifies. According to the International Finance Corporation, the Paris Agreement aimed to tackle climate change by generating energy through reliable, clean energy sources. However, countering climate change by completely overhauling the way energy is generated would require emerging markets to mobilize trillions of dollars through different sources. 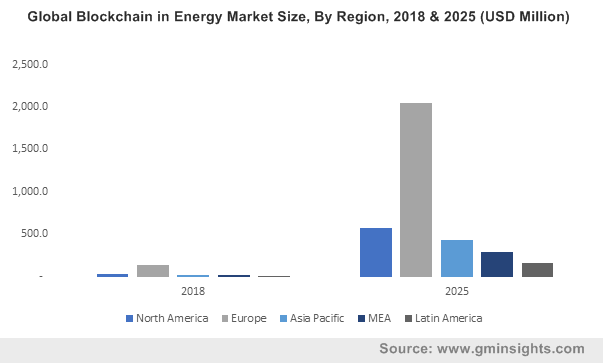 Moreover, the agreement also requires power generation to be more flexible, distributed and through resources that could be managed through bi-directional communication, allowing investors to easily evaluate & track the impact of their investments. To achieve this mammoth task, investors, policy makers & regulators are likely to utilize blockchain technology, combining it with the Internet of Things (IoT), smart devices and big data. In a nutshell, this requirement would majorly help augment the deployment of blockchain in energy industry.

The advancements in blockchain technology have made it a critical ‘trustless’ component in big data and smart IoT-based devices, making it capable of unlocking the new business models that are extremely necessary for the proposed transformation of the energy sector.

According to the World Energy Council, in 2017 a sum ranging between $100-300 million was invested in more than 100 blockchain applications related to the energy sector. Considering its key role in shaping an energy-efficient future, the implementation of blockchain in energy market is expected to increase extensively in the forthcoming years.

Get a Sample Copy of this Report @ https://www.gminsights.com/request-sample/detail/3223

Impact of blockchain technology on the renewable energy sector

The Challenge: One of the key demands put forward by the Paris Agreement was decentralization of the energy generation system. However, increasing installation of small renewable energy systems, such as rooftop solar, could exert a lot of stress on traditional electricity grids, which were specifically designed with large, centralized energy generation facilities in mind.

The Potential: According to the United Nations, several nations across the globe are rapidly boosting their share of wind power & solar photovoltaics. Indeed, renewable energy is slated to account for 40% of the world’s energy production by 2040.

The blockchain in energy market is thus projected to accrue substantial gains in the years to come, propelled by the explosive growth of renewables sector.

Impact of blockchain technology on the conventional energy sector

While clean energy is gearing up to represent a majority of the world’s energy production in the coming years, the sector would still require the support of the conventional energy industry to be able to meet consumer demands. Although it would be playing a supportive role, the conventional energy sector would still need to keep its carbon emissions in check. To adhere to the carbon emission rules, natural gas is becoming the fuel of choice.

The Drivers: According to the Union of Concerned Scientists, this paradigm shift to natural gas can be credited to the fact that it emits approximately 50% to 60% less CO2, when it is burned in a new & efficient natural gas power facility, compared to the emissions from a typical coal-fired plant.

The Numbers: According to the International Energy Agency, natural gas accounts for 22% of the energy utilized across the world and also makes up approximately a quarter of electricity generation. Moreover, natural gas is also projected to overtake coal as the world’s second largest energy source by 2030.

The Potential: The oil & gas sector, in recent times, is transforming into a data-intensive industry. According to the Society of Petroleum Engineers, the industry is increasingly incorporating machine learning, artificial intelligence & IoT into its operations.

With such depicted levels of growth, the industry is also scaling up the adoption of blockchain technology, carrying its transformation a notch further. Not to mention, lesser overhead costs, lowered cash cycle times, and fewer cost intermediaries will also help propel the blockchain in energy industry from O&G applications.